There are so many good things about my new job at the Fortress of Louisbourg, it’s hard to know where to start talking about it. That’s also a recurring problem within the job: we’re on site to “interpret” the historical significance of Louisbourg to visitors who, in many cases, know nothing about its role in the shaping of Canada. It’s a complicated story, stitching together age-old European rivalries with emerging and competing cultures in the New World, and honestly sometimes it’s easier just to hold up my musket and say, “Wanna see my gun?”

During my first week of work, the most commonly received piece of advice from co-workers was “Don’t try to know it all.” I’m not sure how I would try to do that, but they’re right, it’s futile: the history is bottomless, and there are a million fascinating details and anecdotes. Take my character as an example: Jean-François Chaperone, dit “Prêt-à-Boire.” I took his name from the registry of actual French marines working at the fortress in the 1740s. Poor Jean-François had a run-in with the law in 1742: he’d been cutting hay in a field north of the fortress, and on his way back he noticed another soldier passed out drunk in a sheep pen. Feeling charitable, he climbed into the pen to help his mate out; however, both of them were spotted in the enclosure, which turned out to belong to a priest. They were both charged with attempted theft – which, considering sheep were involved, might have been the least embarrassing of possible accusations – and Jean-François was imprisoned for two months. No good deed goes unpunished. 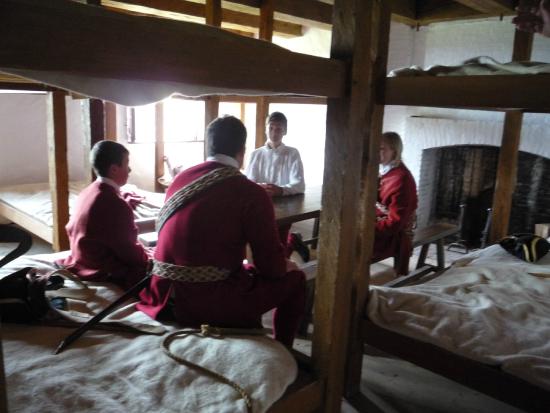 I don’t tell that story very often at work, but it informs some of the other jokes and comments. When giving a tour of the prison, I’ll point to the rough graffiti on the old stone walls. “Do you like that ship?” I’ll ask. “It took me two months.” Or, if I’m describing all the extra work that soldiers used to see out (since they were paid a pittance for their actual duties), I’ll mention that some tasks take you outside the fortress walls, but I usually pass on those kinds of jobs. “I’m not scared of the English,” I’ll add, “But the sheep can be a real handful.”

As a “historical interpreter,” I need to place gauge my interactions on a couple of sliding scales. One is “History vs. Humour,” and my co-workers all have different niches along this spectrum. Most of my fellow soldiers favour “History,” performing deep dives into the political origins of Louisbourg (an early-warning defence post for Quebec, a triangular trading route with France and the West Indies, a supplier of cod to Catholics desperate for fish, etc.), or describing the two sieges convincingly enough that you can almost hear the cannon batteries across the harbour.

But you need to balance those narratives with humour, or else they get as dry as salted cod. Some of the soldiers use character-based humour, complaining cheerfully about a soldier’s dire living conditions, playfully accusing visitors of being English spies, or (if it’s a male soldier) asking female visitors if they’re unmarried. Meanwhile, outside the military bastion, some members of the “civilian unit” take humour even further, creating sketches or slapstick sequences to bring the town of Louisbourg to life in fresh and funny ways. I’ve not had many opportunities to interact with them yet, unless I’m escorting a prisoner down to the iron collar. At times like that, the temptation to ham it up is huge, even though I’m keenly aware that we’re doing a scene about corporal punishment.

The other spectrum for us animators is “Character vs Guide.” We are generally expected to interact with visitors as if we’re living in 1744, and they are our weirdly dressed guests (again, much humour can be gleaned from comments like “Why do you have holes all over your shoes, Madame?”). And generally, visitors eat it up; in fact, sometimes they confess to being English spies, just to see how far we’re willing to take our in-character reactions.

But there’s a hitch to living in 1744: our characters’ lived experience predates both sieges (1745 and 1756), the fall of New France, and ultimately the fortress reconstruction project, started in the 1960s. If I stayed in character, I’d be unable to answer their questions about those events, and I wouldn’t be doing my job. The solution involves a fascinating, fluid dance between Jean-François and Scott, often using humour to soften what could otherwise be jarring transitions.

One simple technique involves incredulous yet momentary ignorance. For example, I once spoke for five minutes about my life as a soldier, including how I got recruited in La Rochelle, and how I dreaded returning to France after my six-year contract was up (my way of explaining that most soldiers had nothing to go back to). Then one of them asked me, “So where are you from?” I knew that she meant me, not Jean-François, but instead of breaking character immediately, I looked at her like she was nuts, and indignantly replied, “I am French!” This got enough of a laugh that I could use it to ease out of character – long enough to answer their question, and to ask where they’re from – something I love to find out when I can (I believe that group was just from New Brunswick, but in the past two weeks I’ve met people from Georgia, Utah, B.C., Quebec, the Netherlands, Germany, the Philippines, and Bangladesh, to name a few).

A more intricate technique for handling the character scale involves the Socratic method. If I’m up on the barbette (the highest point on the fortifications, with a stunning view of the surrounding wilderness), someone will inevitably ask me how the British managed to conquer us. “That will never happen, Monsieur!” I might reply, to start with a laugh, “But you’ve seen our defences for yourself. Where do you think we are weakest?” For visitors who have been paying attention, this question can sometimes launch a “what-if” Q&A that ends up delivering most of the key facts about the first siege – and coming not from my mouth, but from theirs. It’s far more satisfying for the visitor, and I’ll praise them for working things out – “Why are you not in charge here? I’ll speak to my sergeant about getting you hired” – all the while praising myself, for teaching a 1745 history lesson without ever leaving 1744.

With the right balance of history and humour, of character-based interactions and guide-like lecture, it’s possible to make visitors feel fully immersed in the Louisbourg narratives – or, even better, in charge of them. It’s an intricate challenge, and it doesn’t always work, but I’m excited about honing my tricks as the summer goes on.