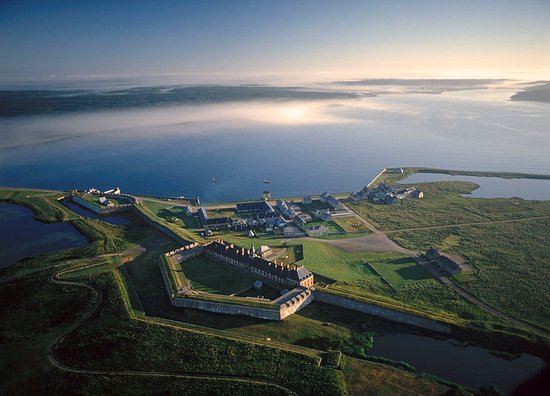 Who owns history? The aphorism goes, “History is written by winners,” but what if it’s not entirely clear who wins? What if countries win, lose, and draw their way through a cycle of wars and conquests and capitulations, until a tide of political reformation washes over all their sand castles and leaves… a reconstructed, 300-year-old fortified town? Who owns Louisbourg?

This summer, it’s free to visit the Fortress of Louisbourg because, like the other 170 Parks Canada sites across the country, admission has been waived in honour of the 150th anniversary of Confederation. Nothing controversial about that, unless you’re a critic of Confederation itself; and even then, who can pass up a free visit? The “Discovery Pass” promotion is how the federal government encourages Canadians to feel ownership of the parks. When you pay to enter a place – even one whose maintenance comes from your tax dollars – you feel as if it belongs to someone else. This year, more than ever, Louisbourg feels like it belongs to Canada. I’ve long since lost track of the number of Canada-themed t-shirts and hats I’ve seen parade through the gates. It’s an invasion!

But, assuming the visitors are on board with our localized, shared, and federally-mandated delusion – namely, that the Fortress exists in an 18th-century bubble – then who is invading what? They know that they are Canadian – their t-shirts proclaim as much – and most of them know that we are pretending to be French. Yet many seem surprised when I tell them (in character) that I was born in France. Their notion of a “colony” blurs into their understanding of Canada as a post-colonial country.

At the main gate, I greet the visitors by asking, “Francais? English?” They respond by identifying the language they speak – but in so doing, they’ve fallen into a trap. If they speak English, then my character assumes they are English. Curiously enough, I think a lot of Canadian visitors even consider themselves “English,” regardless of whether they can trace their roots to the UK. Whereas the francophones might likewise respond “Francais,” but upon further questioning, they’re quick to identify themselves as Quebecois or Acadian – not French French.

Either way, most of the Canadians who visit are cheerfully baffled by the idea that French and English – as languages, or cultural identities – would be at war with each other. Their confusion stems partly from the fact that the Fortress changed hands thrice during its 50-year existence. Approaching the gate, they know I am a French soldier by process of elimination, because British soldiers are “redcoats” and I’m wearing a blue uniform. (Ah, but French cannoneers also wore red! So much for conveniently colour-coded history!) They understand the idea of war, but their understanding of Canada, a bilingual and multicultural country, seems at odds with that idea. Why can’t we all just share?

In The Uses and Abuses of History, Canadian historian Margaret MacMillan writes about how history often provides “an escape from the present,” which seems “complicated and changing rapidly, not necessarily for the better” (now more than ever?). “If is no surprise that we look back to what we mistakenly think was a simpler and clearer world” – a world in which, say, colonial superpowers fought intercontinental wars over things as absurd as religion, or natural resources, or even language. Visitors love the quaintness of Louisbourg – a fortress perched on the edge of civilization where people caught codfish to supplement their religious diets. Whether you shake your head at the inanity of it all, or else nod sagely as you acknowledge how little has changed, there’s a sense of security in making the past make sense.

MacMillan also writes that “In a secular world … history takes on the role of showing us good and evil, virtues and vices.” When visitors hear that the Fortress had a serious flaw in its defences, they feel reassured; the French soldiers who built it were foolish, they think, and so deserved to lose. But when I tell them that the British systematically bombed the Fortress to rubble, their sympathies do a face-heel turn. The British should never have destroyed such an amazing achievement, they think, and I’m glad they are no longer in charge. In fact, Louisbourg is a great example of an historical situation in which nobody was in the right. I don’t get the chance to remind visitors often, but whenever I can, I like to point out that neither the French nor the British had any legitimate claim to North America.

But my gesture towards reconciliation is, itself, informed by history. When the Fortress reconstruction project began in the 1960s, history as a discipline did not tend to take into account the voices of the marginalized or oppressed. Canada’s government was content to spend millions of dollars to recreate a site where the French lost, but that may have been because the French were white colonials. It took another 30 years before the site was modified to include buildings acknowledging the Mi’kmaq who frequently visited Louisbourg during the 18th century, or the African slaves who were bought and sold in Louisbourg’s harbour. Surprise! We had a slave trade in Canada. Talk about reflecting our vices.

Ultimately, we hope that history is about facts, not trends: what happened when to whom. For the most part, the facts of Louisbourg are not in dispute: the French build the Fortress, lost it to the British during a war, recovered it as part of a peace treaty, then lost it again in the next war. The British went directly on to defeat Quebec and Montreal – “New France” was wiped off the map. It’s appealing for Canadians to believe that our French and English ancestors just sort of “worked it out,” but nope. The redcoats won. And the only reason the British didn’t expel the Quebecois, just like they did with (most of) the Acadians, was because there were too darned many of them.

Never the less, whenever I interpret the story of the Fall of Louisbourg, I add a coda: “We lost it to the British, and they blew it up. But I like to think we won in the long run. Because here we are again!” It gets a big laugh, sometimes even applause. It provides both escapism and inclusiveness – a perfect happy ending. But whenever I say it, I am keenly aware of the fact that I’m saying it in English. Who owns history?