I have been back to work at the Fortress of Louisbourg for three weeks now, but the whirlwind of activity that characterized my first summer has yet to begin. Last year, I started just before Canada Day, when the Parks Canada site rolls out its Peak Season schedule, complete with daily musket drills and cannon demonstrations. This time around, I started on June 1, with four weeks of Shoulder Season to ease me into the crush. 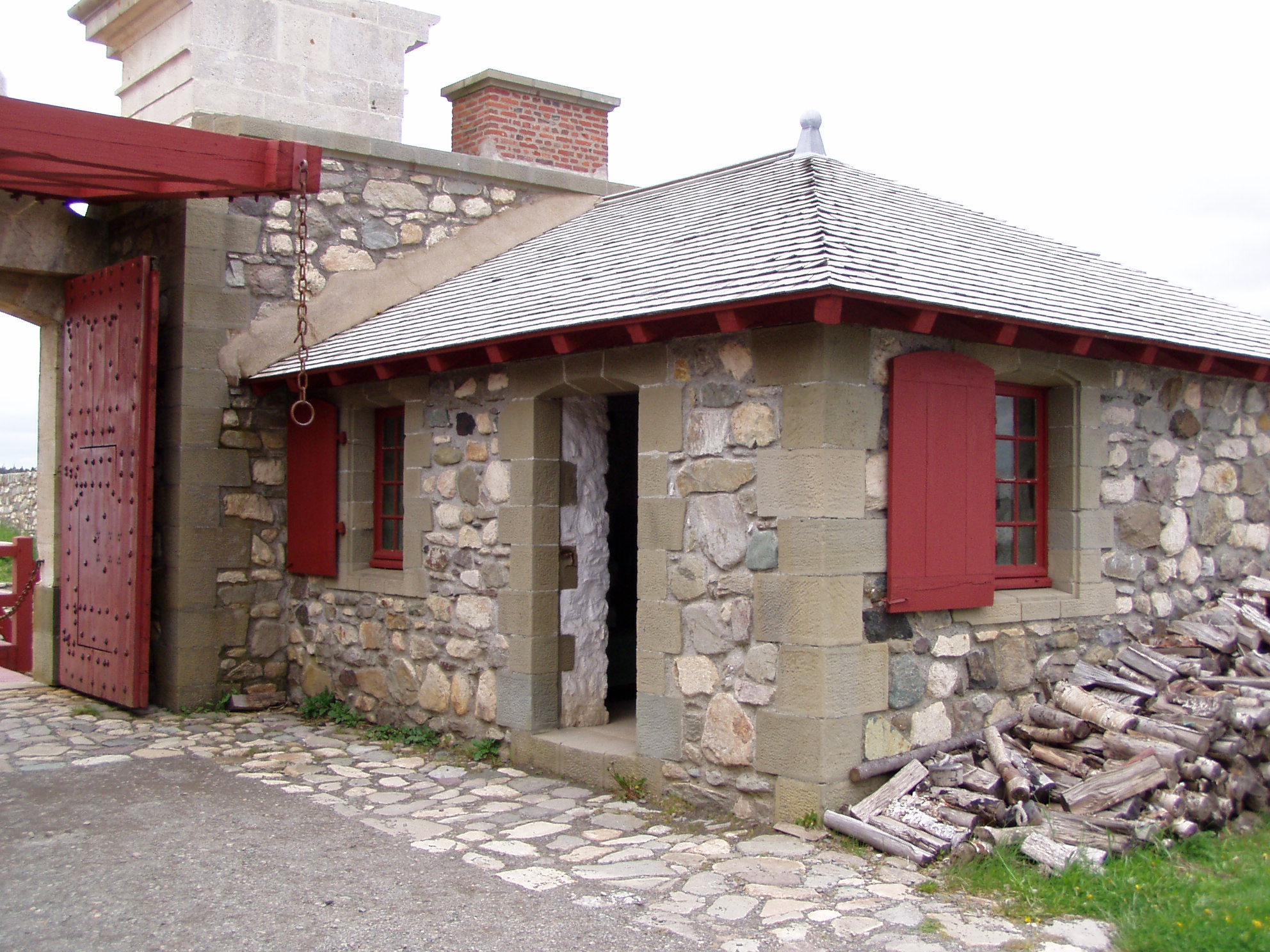 So gradual has been the rollout that only this week have we soldiers been sent to work at the Dauphin Gate, a post far from the military hubbub of the King’s Bastion. On a busy day in July or August, gate duty is non-stop bonjouring and adieuing, as busloads of tourists spill into, and eventually stumble out of, the fortress. But on a placid day in June, the gate is an oasis of calm, punctuated only infrequently by arrivals or departures. I am free to contemplate the gentle motion of the harbour water as it slides through the sluice gate into the moat. I can watch barn swallows build nests under the eaves of the guardhouse. They dart down to the puddles from last night’s rain, scoop up a mouthful of mud, then flutter back to their half-completed huts to apply the mud-spit glue. It’s serene, watching a bird build its home.

Except for these two assholes.

Bucking the real estate trend, one mated pair of barn swallows has begun building a nest inside the guardhouse. When I first arrived, I found them on one of the rafters, and it took several minutes of slapstick pursuit before I persuaded them to leave. I don’t know how long they’ve been at it, but judging by the shit-stains on the wooden floor, it’s been awhile. After I evict them, I close the door, but anytime visitors express an interest in the guardhouse, I need to re-open it, whereupon they spring out of hiding and glide back in. Once the visitors leave, I evict them again, and sit on a bench beside the closed red door. The swallows land a few feet away from me, on the top of the musket rack. They gaze down at me with beady eyes. Occasionally they erupt in a refrain of pit-pitpit-pit-pitpits, but mostly they are silent…patient…judgmental. I talk to them in two official languages. I apologize for giving them the boot, but I point out there are plenty of available spots beneath the eaves — or, if they really want an indoor home, the artillery hangar is just up the street, with far less disruptive human traffic. “The guardhouse is about to get really busy,” I tell them, “It’s a bad neighbourhood to raise kids.”

But maybe they’ve already laid eggs. I have no idea how fast barn swallows reproduce. A sick feeling comes over me as my metaphor-mind kicks into overdrive. Am I separating these parents from their children? Have I arbitrarily declared that the interior of the guardhouse is human territory, and am now persecuting the swallows as illegal immigrants?

I shake off the thought. Too much time alone at the gate. Still, the pair continue to watch me, waiting for a change of heart.

The next morning, I bring the swallows up at our morning meeting. The supervisor shrugs it off. “They’re always getting into everything,” he says — and it’s true. In fact, Louisbourg’s proximity to nature is one of the things I love about it. Earlier in June, we were all thrilled to observe a mother fox raise her kit in the ditch surrounding the bastion. She was able to jump out of the man-made ditch, and would hunt for vermin and deliver the treats to her child. We were all sad the day the kit was able to escape the ditch, to join her mother on more protracted hunts. Back at the drawbridge, we humans felt privileged to have had the chance to witness the slice of nature.

Still, I do not feel privileged to have swallows shitting on my tricorne hat. I bring the swallows up again another time, asking other soldiers who’ve had gate duty if they are still a problem.

They say yes. “I think they’ve got eggs in there,” says one.

“If they’ve laid eggs, we can’t interfere,” says another.

Is that true, I wonder? It can’t be an across-the-board Parks Canada policy. Up in the barracks, those mice have almost certainly made baby mice by now — but that doesn’t stop us from setting up mousetraps. Even if there were some particular moral loophole about protecting babies, what happens once the babies grow up? And in the meantime, what about human babies, by which I mean, the young tourists who visit the barracks or the guardhouse, touching everything with their chubby child-fingers? Do we allow them to catch hanta virus or bird flu or whatever? Are the babies of swallows or mice more precious than our own children?

As July creeps ever closer, the crowds pick up. I notice a lot of tourists from the New England states and the Carolinas. Once, up on the barbette overlooking the ridge where, 300 years earlier, the Yankees set up their cannons to pulverize our French defenses, a woman from Virginia tells me that she “never really thought about the fact that there were other cultures here in North America.” She just “always thought we were the same” — that is, American.

I smile very broadly. “You may wish to be careful with that attitude, madam,” I say.

But later I wonder if we’d all be better off naively believing that everyone is us. I’m using the Fortress to hide from the real world, because the real world is a nightmare of fractionalism, with ideological or cultural fences breaking down the so-called global village into a billion booby-trapped yards. If the Virginian woman were telling the truth — if she really, truly believed that everybody is basically the same — it would fill me with hope.

But I’m too cynical to believe that. I fully expect she will head home, read some news articles or tweets about Mexican swallows invading her psychic guardhouse, and click the icon with the frowny-face.