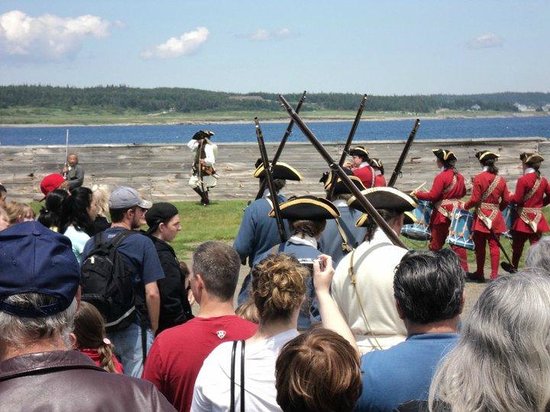 Attendance at the Fortress of Louisbourg has been up nearly 50% this summer, with well over 100,000 visitors arriving by car, motorcycle, motor home, or cruise-ship-by-way-of-coach-bus. The spike in attendance is partly due to uncommonly good weather, but mostly we can thank the federal government for its Canada 150-themed waiving of admission.

As we marvelled at the statistics, one of my co-workers shrugged, and said, “If Louisbourg were right in the middle of Toronto, I bet we’d have millions of visitors per year.” That estimate might be a bit hyperbolic; the closest American analogue to Louisbourg is Colonial Williamsburg, whose 2015 annual report cited 574,300 tickets sold (lower than expected, and part of a continued downturn). Mind you, that site is situated in a city of only 14,000 people, whereas Toronto is a metropolis. So maybe they have a point.

I understand where that comment came from. It was partly an expression of pride, and I agree with the sentiment. Louisbourg is a truly unique site, and deserving of more attention. It is larger than Williamsburg – the largest historical recreation site in North America, in fact – and its history is arguably of greater international interest. But the co-worker’s comment also stemmed from frustration; Louisbourg is just so darned remote. If it were in the heart of everything, it would be ten times more popular.

Maybe so. But if the 18th century Fortress of Louisbourg had existed in the middle of present-day Toronto, there wouldn’t be a 21st century Fortress of Louisbourg. Recreating the 300-year-old fortress with accuracy wouldn’t have been possible if it were on a living site. Think about it: there are plenty of cities in North America whose history stretches back more than 300 years, but you can’t rebuild a portion of their antiquity because people still live there. The wear and tear of human activity grinds down antiquity to dust. No foundations would remain from which to build back up. And if there were artifacts still buried in the mud, they would be under countless urban strata: subways, sewers, power lines and subbasements.

So Louisbourg couldn’t rise from its ashes if its ashes bore life. Even the modern-day fishing village of Louisbourg is on the opposite side of the harbour; they borrowed the name from the fortress, but they didn’t care for the location. The site’s remoteness and relative inhospitability was its re-birthright.

In any case, I’m not convinced the site would benefit from having millions of visitors per year. There is already a regrettable ratio of modern-dressed tourists to historic interpreters, such that on a busy day, catching sight of a soldier or a nobleman becomes a rare treat, like finding Mickey Mouse at Disneyland. If attendance shot up, perhaps Parks Canada could hire a lot more interpreters, but where would we put them all? There’s little value in posting another ten soldiers to the guardhouse when all it takes is one single soldier to explain its function to a crowd.

It’s easy to get caught up in this game of speculation/daydreaming/wish-fulfillment, but I try not to lose sight of the fact that Louisbourg is (a) pretty terrific just the way it is, and (b) granting satisfaction to all sort of tourists. One of my favourite parts of the job is chatting with visitors; if I had to deal with a tenfold increase, I’d have a tenth of the time to get to know any of them.

When I started this summer, I kept a list of people’s points of origin. That project fell by the wayside quickly, since there wasn’t time to jot down the names of states or countries. By now, I’m fairly confident that I’ve met people from all 10 Canadian provinces, if not the territories; I’ve heard accents from at least half of the American states; and I’ve posed for photos alongside folks from all the continents save Antarctica. I remember the day when someone confirmed they were from Australia; I very nearly pumped my fist and said “Yes! I got ’em all!”

They come in waves. July saw plenty of visitors from New England and the Eastern seaboard, most of whom were keen to compare notes about our revolutions. Later, in August, the southerners swept up from Florida, Louisiana, and Georgia, marvelling at their discovery that Canada had a whole plum history of its own. Sometimes we danced gingerly around the very notion of history, as I did with a sensible fellow from South Carolina who saw in the existence of Louisbourg an argument for the preservation of Confederate monuments. When politics rears its ugly head, I go back to smiling and posing for photos. 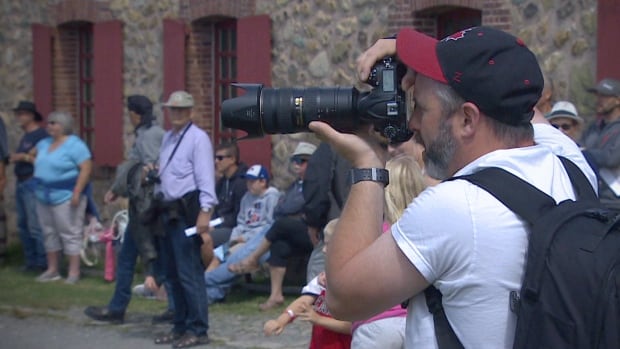 Asian tourists love photos – and so do Germans, but they go about it very differently. While Japanese tourists will make sure they get themselves into every shot, Germans just want the historic, the authentic, the real – and they will scowl if you smile too broadly for the camera. Sometimes large families from India or Bangladesh or Puerto Rico will be so excited to see me in uniform, they will mob me for enthusiastic group photos before I even get the chance to say “Hello-Bonjour!” I don’t know the countries of origin of the long-distance photographers who like to try to snag candid photos of me from the opposite end of the bastion, possibly hoping for that rare and valuable shot of a French soldier checking his anachronistic watch. Let’s assume they’re Swiss.

Local visitors are also a delight. They don’t take many pictures, but they bring their memories with them, and engage me in a game of compare-and-contrast which I, having only worked at the Fortress for a few months, cannot hope to win. “When I was here as a kid, thirty-five years ago,” Some man from North Sydney might say, “I remember a great big hole in the ground. Where’s that at?” Or, from a Port Hawkesbury woman: “There used to be a sign in the church saying there’s a mother and child buried under the floorboards. Why’d they take that down?” Even the most senior employees probably can’t help them resolve their fuzzy memories, but it’s usually just enough to engage with them, to listen and nod and lend validity to an image that has stayed with them throughout their lives.

Sometimes we get what passes for celebrities in Canadian culture. This week, it was Adrienne Clarkson, the former Governor General, and her husband John Ralston Saul, perhaps Canada’s greatest living philosopher and public intellectual. I got to chat briefly with Saul, and was astonished to learn that (at the age of 70) this was his first visit to Louisbourg. Here’s a man who knows more about Canadian history than anyone I’ve ever met, yet he’s walking through the site with the same sort of goggle-eyed amazement as a tourist from China or Brazil or West Virginia. It’s just that sort of place.