Edmonton recently had its hopes raised, then summarily dashed, by the Oilers’ adequate performance in the playoffs. For a brief moment, all Canadians threw in with the plucky underdogs. We were envisioning a uniting moment, not unlike the one we got in 2016, when the Hip played Kingston. In Canada, we are always a bit desperate of national iconography, even when its signifiers are staring us right in the face.

It would have been easy to explain the Oilers to my French friends. They can mentally substitute football for hockey, and we’re all on the same patriotic page. Ditto music – in fact, when Leonard Cohen died, France mourned the man as if he belonged to them. Other national markers are easy to equate: we dig our beer, they dig their wine. We dig garrulousness and politeness; they dig superciliousness and…cheese.

But there’s one supposedly intrinsic aspect of our culture that the French just wouldn’t get: Tim Hortons.

The more you learn about Tim Hortons, the more Canadian a phenomenon it seems. Everyone knows the chain was founded by a former Maple Leafs player, but there’s something extra-Canadian about the fact that Horton wasn’t a Gretzky or LaFleur – he was a dependable but unflashy player on a middling team. He only got into the restaurant business because his partner, Jim Charade, was desperate for any celebrity cachet. Then, 10 years later, just as the chain was gaining widespread popularity, Horton died in a car crash. It’s exactly the kind of biography that Hollywood doesn’t make films about. In short: a Canadian narrative.

43 years later, Timmy’s rules our fast food market with the humble, Canadian version of a monopoly: 76 percent of pastries and coffees sold in our country come from their stores. To a Frenchman, who has a dozen croissant shops to choose from on his block alone, this would be unthinkable. But Canadians seem to appreciate the reassuring homogeneity enough to keep the Timbits rolling down the line.

More maple in its DNA: the chain’s name contains our country’s most persistent punctuation error, but the reason we don’t buy our double doubles at Tim Horton’s is a splendidly Canadian one: in 1977, the Parti Quebecois passed Bill 101, making it illegal for companies to advertise only in English. Rather than refashioning their brand into some awkward variation of Le Café de Tim Horton, the corporation simply dropped the apostrophe from its name nationwide. Now it wasn’t an English phrase, but a language-transcending brand that coffee snobs in all parts of the True North could disparage equally.

And come on, Canucks: it isrotten coffee. Even the belated introduction of a dark roast (unveiled in 2014, retooled earlier this year) can’t convince me that Tim’s cares much about the taste of its java. There are even rumours that the mud contains salt or nicotine – why else would it be so popular? Yet I think urban legends like these just underscore its importance to our nation. It’s not enough that we swig 2 billion cups of the junk every year – we have to think about it…talk about it…maybe worship it a little bit…

What makes Timmy’s so addictive to us, if it isn’t literally a drug? It doesn’t hurt that the company works hard to pair its brand with Canadian identity. While other companies seem embarrassed – the maple leaf in the Canadian Tire logo is tiny and green, plus they print their own money like they can’t wait to secede – Timmy’s routinely runs ads that quote our national anthem, or riff on our supposed values – family, working-class pride, immigration – with more saccharine sentimentality than a 24-pack of dutchies. 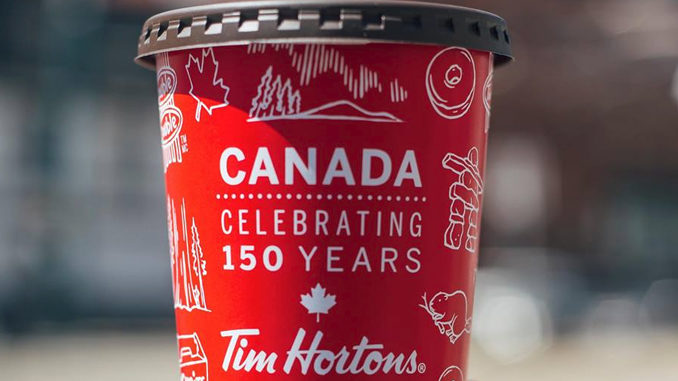 In fact, let Exhibit A be their current to-go cup, which celebrates Canada’s much-ballyhooed 150thanniversary. For a limited time only, instead of rolling up the rim, customers can admire white-on-red line drawings of ALL THE CANADIAN THINGS: beavers, inukshuks, forests, lakes…um, rocks?…and oh yes, donuts and Timbits. And there it is: the French, having cultivated their cultural identity over 1,100 years, are secure in who they are, and resent any corporate effort to spoon-feed it to them. But we in this young and somewhat muddled country, are insecure, and lap up the icons they craft for us like Ice Capps in August.

Recently, P and I joined a city-wide cleanup, spending a Saturday morning collecting trash along Sydney’s downtown streets. Unsurprisingly, at least thirty percent of the litter bore the same, faux-signature logo. It was a tiresome irony, to see all those anniversary cups, with their friendly little versions of Canada’s jaw-dropping natural landscapes, cluttering up and uglifying every street in town. Tim Hortons may not add salt to their coffee, but there is salt in the earth, and they own a majority share of both the glory and the blame.