It won’t surprise anyone to learn that I’ve been thinking a lot about the end of the world. It’s not just me, though I’ll admit that I’ve been a tad more obsessed with apocalypse than your average privileged joe. Or maybe not; maybe it’s those of us who have the privilege who end up compulsively thinking (and writing) about losing it all. But even if I’m a bit hung up on endtimes, at least I’m not alone lately. As 2016 winds down, it really does seem like the end of the world as we know it. How does it make you feel?

You never forget your first apocalypse. In my teen years, I read Richard Matheson’s I Am Legend and John Wyndham’s Day of the Triffids, but I’m somewhat chagrined to say that my earliest dystopias were not literary or even filmic; they came from MuchMusic. In the early 80s, dystopia chic cropped up in music videos like Duran Duran’s “Wild Boys” and Frankie Goes to Hollywood’s “Welcome to the Pleasuredome” – and although both were ripping off the Mad Max series, I was unaware. I also didn’t learn till much later that Duran Duran (the band) was named after a character in Barbarella, nor that FGtH’s hit was an allusion to Samuel Taylor Coleridge’s “Kubla Khan.” Kids, growing up without the Internet was brutal. Don’t ever let it happen again.

Cutting through the crowds of leather-clad mutants was one god-awful yet fascinating video: Rick Springfield’s “Bop Til You Drop.” There was nothing even remotely original about either the song (Springfield stole the title from a Ry Cooder album) or the video, which depicted Metropolis-like slaves within a Dune-like desert enclosure, oppressed by an Alien-like overseer who forces musicians to entertain him, then executes then with Jabba-like disdain. Springfield enters, sporting a MacGyver-like mullet, and incites an uprising with the power of rock ‘n’ roll. The freed workers raise their hammers in triumph, evoking both communism and the Apple 1984 commercial in one fell swoop. The video was directed by a young David Fincher, so I guess it couldn’t have been that bad, yet it has softened into heady cheese within my memory.

Ironically, while my impressionable mind was being seeded with images of a sexy apocalypse, the decidedly unsexy threat of nuclear war hung over us all. I don’t remember watching Threads or The Day After – or maybe I blocked them out as incompatible with my favourite dystopias. There was no serious talk of preparedness or contingency plans in my family, no “duck and cover” drills in my school. The assumed subtext of my youth was: if America or Russia “pushed the button,” we would all be dead within a day. So why worry?

I’ve written no fewer than four plays about the end of the world, but nuclear war isn’t a plot point in any of them. Mostly, the causes are vague – mythological or theological endtimes, the Second Coming or the Next Age or just a pervasive sense of doom. Maybe that’s because I’m more interested in characters’ reactions, but looking back, it feels like sloppy storytelling. The clearest I ever got was in a play about the zombie apocalypse, and that one was caused by an expired chemistry set and some contaminated popcorn. By comparison, “Bop Til You Drop” feels pretty well-researched. 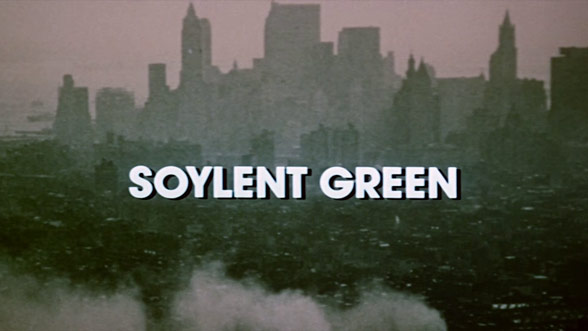 But I’m not alone; some of the most talented dystopia-spinners skim over cause and skip to effect. Great novels like Margaret Atwood’s The Handmaid’s Tale and Cormac McCarthy’s The Road begin in media res, after civilization has fallen apart; the film Soylent Green handles exposition via a clever opening-credits montage of a resource-draining population boom, illustrating the disaster far more effectively than dialogue. Maybe the scariest dystopias of all use ambiguity to imply universality. Franz Kafka’s stories, Bradbury’s Fahrenheit 451, and Orwell’s genre-defining 1984, are ominous because they could result from all kinds of different real-world scenarios.

Zombie apocalypse, fascist apocalypse, post-nuclear apocalypse…if only we were afforded as many choices in real life as we get in fiction. In the twenty-first century, the truth is coming into focus: climate change, droughts and natural disasters; mass displacements and civil wars and refugee crises in some parts of the world; xenophobic hoarding and hysteria in others. It’s insidious and slow – nothing you can cram into an opening-credits sequence. Conspiracies become cults, fear and denial become faith, the moribund status quo becomes an ideal worth dying for, even to generations who never knew plenitude or peace. Civilization ends where it began, with desperate tribes clubbing each other to death in the desert, each side screaming its entitlement with zealous gibberish.

Ugh, sorry, everybody. Here’s a squirrel kissing a kitten. If I got to choose my own dystopia, then obviously I’d choose one where the works of Shakespeare and Gary Gygax are revered as holy writ, making Dungeon Masters and Bardolators into high priests of great value. In almost any other scenario, I’ll be dead within a week. And maybe that’s what I deserve; if I’d quit writing farces about the apocalypse and taken firmer action to avert it, I’d have earned a place in the Next Age. But it’s human nature to play the fiddle while Rome burns. Who wants to die without a soundtrack? We bop ‘til we drop.