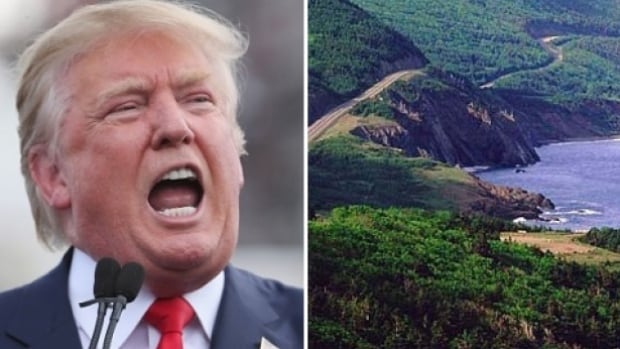 It took me awhile to figure out why I can’t stop clicking on Donald Trump-related links. It’s been a time-consuming distraction, especially since the national conventions, when Trump’s approval ratings really started dropping heavily. As a Cape Bretoner, I have a weird connection to Trump, thanks to an accidental viral tourist marketing campaign. But I know that holding out for a potential “Trump Bump” is ludicrous, and reading about the candidate’s almost-daily gaffes won’t influence the outcome, so why do I bother?

The answer is one word long, thanks to German: schadenfreude. Literally, the word means “harm-joy”; the closest English equivalent is “gloating,” except that’s more active. Schadenfreude is the positive emotional response that we permit ourselves when someone else is suffering. Generally, if you are inclined to feel schadenfreude at all, you’ll feel it most when the stakes are high. The bigger they are, the harder they fall, and the more illicit joy you feel as they go down.

In Old Testament terms, it’s a no-no: “Rejoice not when thine enemy falleth, and let not thine heart be glad when he stumbleth, less the Lord see it, and it displease him, and he turn away his wrath from him” (Proverbs 24:17-18). Note the last part, which implies that you should shun schadenfreude not for your own sake, but because if you indulge in it, then God might stop punishing your enemy just to spite you. Nice twist there, Lord.

In spite of this Biblical warning, I’ve come to realize that, when it comes to Trump, I’m experience a schadenfreude hat trick. I feel harm-joy towards the man himself; I feel it towards the Republican party, who backed him and almost instantly regretted it; and I feel it towards the whole United States, because Trump has torn away a curtain and exposed something very ugly in their national character. In isolation, none of those levels would be enough to make me fall for all the click-bait journalism. Altogether, it’s too much to resist.

Trump is a spoiled-brat billionaire. He inherited his wealth, and he’s been entitled and undisciplined in how he spends or flaunts it. I don’t know when, for me, that archetype became antipathy for me. I was born into a reasonably wealthy family, and it took me awhile to acknowledge my privilege; maybe I have a particular hate-on for white guys who went the other way, burying their heads deeper and deeper in the sand?

I didn’t care about Trump until this election began, but now I can see that he has been occupying that role in the cultural imaginary for some time now. Parodied on The Simpsons and SNL for decades, Trump eventually embraced his role, becoming a self-parody through his reality TV shows. Now that I see his narcissistic arc clearly, I feel as if he’s essentially begging for schadenfreude as his election hopes go down the drain. At least those who feel hate-joy for him are paying attention to him, and something tells me that’s all Trump has ever wanted.

The Republicans are a different story. Much like the Alberta Tories, the GOP became complacent with power in the 80s, doubling down after 2000 and 9/11. It’s not so much that they considered themselves unbeatable; rather, they took their own conservative vision for America as America itself, the dream in action. Anyone who opposed this trajectory was, by default, un-American—including, of course, the Democrats, who are actually pretty right-wing themselves, at least by Canadian standards.

Maybe their conviction isn’t a crime in itself, but the GOP’s “vision” has become increasingly more fractured and dissolute. Trump’s campaign slogan, “Make America Great Again,” sums it up; it’s not about the future, it’s about reclaiming any number of imagined pasts—the Reagan/Bush 80s, the Cold War 50s, or even further back—the Victorian/Puritan/gunslinger ethics upon which so much of America’s modern morality is needlessly, irrationally founded.

Can you blame me for grinning and munching popcorn while the Republicans, having handed Trump the arsonist the keys to their mansion, are now rushing around with buckets of water, all the while trying to make it look like nothing’s wrong? I only wish the catastrophe heralded reform in any positive sense, but I doubt it. Something even viler will rise from the ashes.

That’s why I find my third tier of schadenfreude the most disquieting. America is a self-righteous bully, and it’s fun to watch bullies get their comeuppance. However, I’m politically savvy enough to recognize that the nation’s rage comes out of genuine hardship. America is hurting, and Trump’s rabid supporters are among those hit hardest. When Trump and the GOP burn down, that pain and rage is not going to disappear. President Clinton will be a thousand times more competent than Trump, but she’s not the ideal person to heal that pain.

At the ground level, there are millions of well-intentioned Americans who are going to leave this election year traumatized and confused—or far worse than that, if the polls are wrong and Trump wins after all. I can’t justify gloating over their unhappiness. They are in the burning building too, but most of them did not invite the arsonist, and their only means of escape—ie. a Democratic victory—must feel like a dreadful compromise, especially after eight years of Obama.

I have the luxury of feeling schadenfreude at all because I’m not American. Ironically, back in “Trump-Bump” Cape Breton, there’s another election brewing, with more direct consequences for me. And like the 2016 race for POTUS, the 2016 CBRM municipal election is shaping up to be an ugly, frustrating contest between deeply flawed candidates. Maybe as payment for my schadenfreude (more irony, Lord?), I’m going to be out of the country during this election; so while its results will affect me profoundly, I can do very little to affect its outcome.

Americans, if any of you wish to gloat about my situation, now’s the time.