“In this world, there is a kind of painful progress. Longing for what we’ve left behind, and dreaming ahead.” 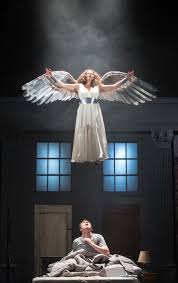 Yesterday, slate.com published an “oral history” of Angels in America, Tony Kushner’s magnum opus and perhaps the single most celebrated work of American art in the past quarter century. Since I recently wrote about my love for messy masterpieces, I thought I’d take the occasion to collect my thoughts and associations about this awe-inspiring play (or plays).

I’ve never been involved with a production of Angels, either its first part (Millennium Approaches—about 3 hours long) or its second (Perestroika—at least 4 hours long). I would be terrified to direct either chapter, much less both, and this is coming from the guy who just directed Hamlet. My strongest personal memory of Angels is driving 3 hours from Edmonton to Calgary with Dion Johnstone in order to catch a preview of Millennium Approaches at Alberta Theatre Projects—and then driving back up that same night. Dion was in his final year of BFA Acting studies, and was due to rehearse Six Degrees of Separation that night, but he asked his director if he could weasel out, and as soon as they heard the reason, they said “Of course, you have to go.” Angels in America was just that big a deal.

ATP’s production may not have been the Canadian premiere, but it was certainly the first Alberta production (a couple of years later, the Citadel co-produced both parts of the play with Phoenix Theatre—one of many companies worldwide who went bankrupt trying to produce it). As a result, conservative pundits attacked ATP for producing the play, whose subtitle is “A Gay Fantasia on National Themes.” Foremost amongst them was Alberta Report, a grotesquely biased fundamentalist rag who only dipped into arts reporting when they found something about which to be offended. Angels made the cover—they took the ATP poster image of a wounded, fetal angel and added Kaposi’s sarcoma lesions to it, to make sure nobody accidentally mistook Angels for anything other than a play about AIDS.

That was sort of their chief complaint, too: Angels is a play about AIDS, and more specifically about some of the people affected by it—New York Jewish gay intellectuals—and therefore it was too narrow in its material to be a classic, or indeed worth anybody’s attention. This argument was not only a piss-poor attempt to camouflage homophobia, it was also self-defeating, since any publicity is good publicity. I remember feeling triumphant by association; theatre was so seldom newsworthy, so if Angels made the cover of Alberta Report, “we” must be big news.

I had already seen homosexual characters onstage, thanks to the outré offerings at the Edmonton Fringe Festival, and especially thanks to Brad Fraser, Edmonton’s rockstar playwright of the 90s, and eventually Darrin Hagen, the Edmonton Queen.  The AIDS crisis was mostly news to me, though, as were Kushner’s commentaries about race and religion in America. But I confess that I didn’t love Angels in America because of its subject matter, although I found its intellectual force intoxicating. Mostly, I loved its unabashed theatricality; here was a play featuring angels that burst through the ceiling, and according to the playwrights’ notes, “It’s okay if the wires show, and maybe it’s good that they do, but the magic should at the same time be thoroughly amazing.”

Theatre that doesn’t apologize for being theatre. In an age of screen saturation, this felt revolutionary. I hadn’t studied Brecht back then (socialist playwright/director, mid-twentieth century, used theatre to enact social change), so my only exposure to metatheatre (ie. plays that acknowledge they are plays) was the irreverent absurdism of Tom Stoppard’s Rosencrantz and Guildenstern are Dead—and I loved that too, but Angels had a more serious and high-minded agenda. Not only was it unashamed of being theatre, it was using theatre to reshape society—and, if it had the demagogues at Alberta Report running scared, then it was working.

Small wonder, then, that the next play I wrote was essentially Angels in Canada. The script was actually called Bitter Belly, Mouth of Honey (Biblical allusion, check), and followed a small army of characters (multiple plotlines, check) as they prepared for the impending apocalypse (millennial anxiety, check). It featured not just gay characters, but even a blind lesbian.

Here, I missed the point that Kushner was writing specifically about New York Jewish gay intellectuals because he was one; whereas I, having had no personal experience being gay, female, or handicapped, was out of my depth.

I also missed the fact, so obvious in hindsight, that Angels in America is not just ambitious and theatrical and epic, it’s also funny. This left Vern Thiessen, my dramaturge, with the awkward task of convincing me that my 3-hour play about the apocalypse should really have “more jokes.” He also pointed out a disturbing motif in the script—lots of violence against women. Now, as a more mature playwright, I understand the difference between commenting upon something and merely depicting it. Back then, not so much. And so my attempt to build a great Canadian epic collapsed into a heap of misogyny and angst. Bitter Belly never came anywhere near a stage, and it never will, thank the angels.

But as another inimitable playwright said, “Fail again. Fail better.” I learned a lot from failing to copy Tony Kushner. 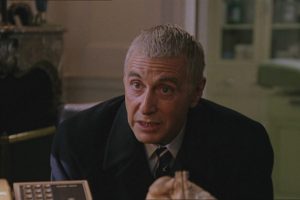 Gradually, my plays have become more personal—not autobiographical exactly, but spun more directly from the ideas and issues that affect me directly. I no longer try to capture the zeitgeist; I doubt that’s what Kushner was trying to do anyway. He was doing what Thornton Wilder believed to be the purpose of drama: using the specific to realize the universal. It’s what Alberta Report didn’t understand, and what I didn’t grasp until much later in life: the more precise and focused the story, the more it ends up being about everyone.

Angels in America is a fantastic read, and I believe the excellent HBO miniseries (with Al Pacino, Meryl Streep, Mary-Louise Parker, etc.) is on Netflix. Check it out.

“We won’t die secret deaths anymore. The world only spins forward. We will be citizens. The time has come. Bye now. You are fabulous creatures, each and every one.”