At the end of X’s first term, we agonized over whether to stay enrolled in public maternelle or transfer to a tiny, fledgling Montessori school with a more flexible pedagogical style and a higher student-teacher ratio. Neither solution removed the greatest obstacle in adapting to French school – not the language, but the cultural gap. After much tearing-out of hair, we chose the status quo, with a few adjustments designed to make the days less taxing for our unconventional, hyperactive, antisocial five-year-old. 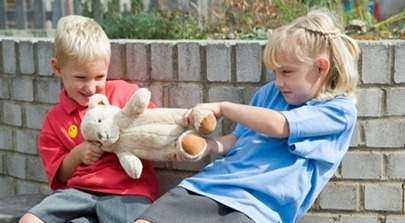 Since the second term began a month ago, I’ve been bringing X home for a two-hour lunch break, hoping this would give the kid’s busy brain a break. The downside is that X misses out on the cantine’s splendid range of healthy, hot lunches; but the daily prison-break also serves to eschew from the timeslot when most of last term’s violent encounters occurred: the one-hour recess just prior to cantine. To me, it seems incendiary to stuff dozens of kids into a tiny, barren courtyard for an hour before lunchtime. If I were forced to spend a cold and hungry hour there every day, I’d probably go Lord of the Flies too.

The adjustments appeared to be having an effect; X has never been forthcoming with details about the goings-on in school, but at least I got fewer rants from the teachers about his misbehaviour. Then, just over a week ago, something seemingly unrelated caused the floodgates to break. Suddenly, everything came into different focus – my kid, my parenting, the French school system – and it became blindingly obvious that something has to change.

Over a series of conversations with S, X announced that she was a girl. No huge shocker there – X has been gender-non-conformist since the start, and we’ve done our liberal best to lay all of the options out in the open. And it may be a phase, of course, or just one step in a lifelong exploration that takes X all over the gender spectrum, or off the map into completely new territory. But, for now, our dress-wearing boy is a dress-wearing girl. It doesn’t need to be more complicated than that.

Except, well, bullshit. S asked if X wanted the teachers to start using elle instead of il, and she said yes. But when S made this request to la directrice, the merde hit the fan. Ours was not only an unreasonable request, but also indicative of our overly permissive parenting style – an approach which made the teachers’ jobs unbearable, because it rendered X unteachable.

Wait. Unteachable? Surprise! Whereas we thought things were improving, the truth was apparently more grim: X is perhaps not quite so violent with the other kids, but she is inattentive, which in French connotes “careless” or “reckless.” Ignoring instructions. Refusing to perform assignments or collaborate on exercises. Making messes in the cloakroom. Running with scissors. Shedding coat and mitts and toque in the middle of the playground. Holding pencils wrong. All of these criticisms poured out with equal force, and behind their weight was a clear conclusion: X was entitled and spoiled and indifferent to the needs of others. And it was all her parents’ fault. From my perspective, this has nothing to do with gender identity. In fact, a lot of the evidence made me suspect ADHD – a condition I’ve often thought X might have, as I’ve often had trouble getting her to focus at home, too. But French doctors don’t diagnose ADHD in children nearly as often as their North American counterparts. And clearly, in the case of this directrice at least, the French don’t think much of gender dysphoria either. “He is too young to make this kind of choice,” she said, contradicting current North American wisdom on the subject and revealing her own bias through the use of the word “choice.”

On one level, the directrice is right about us, as parents: we are awfully lenient. French parents love their children, but do not accommodate or participate in their child’s play nearly as much as we do. When X slacks off at home, we often let it slide because that’s easier than arguing. And when we do butt heads, our “discipline” mostly involves talking about feelings. I can count on one hand the number of times we’ve imposed actual sanctions against X – no screen time for a few days, or in a couple of cases, the silent treatment for a few hours at a stretch – and they’ve usually felt harder on us than on X. If we ran a tighter ship at home, our child would navigate much better through the rigid structure of maternelle.

But still. ADHD or not, it’s blindingly obvious to me that X has an unusual learning style, and there have been zero attempts to accommodate that at school. At home, X has more than a dozen notebooks into which she pours her plans, sketches, emojis, etc. “Can we send one notebook to school in X’s backpack, so she has something to do instead of being disruptive?” Of course not. The notebook is the disruption, the physical capitulation that X is different, and requires special measures. And that’s just antithetical to a school system whose philosophies are built around a strict interpretation of égalité.

And that goes double for the boy who wears dresses and wants to be called elle. And here is the zero sum part of the problem, because even though we might be flaky, overpermissive parents by French (or any) standards, we’re not prepared to treat X’s gender identity as a choice. And it’s certainly not going to be a bargaining chip in a bunch of adult negotiations over the best way to educate her.

A few days after the directrice blew up at S, she offered us what she probably thought of as an olive branch: the phone number of a child psychologist. “She is expecting your call,” she said. Well, fine. I’m not too proud to think there might not be things I can learn from a psychologist. We might even be able to span the cultural divide, to talk openly about issues like ADHD and gender identity. But while those discussions unfold, X will be attending a different school – hopefully one in which flexible learning styles are acknowledged, and where nonconformity is not lumped in with inattentiveness or with holding one’s goddamn pencil the wrong way.