In preparation for the final exam, let’s review: our nuclear family took flight to France for a sabbatical that was meant to last ten months – September to June, the same length as one year of public schooling.  The school calendar shaped a lot of our plans: French students get four two-week holidays, spread out through the year – a schedule which probably drives French parents nuts but which gave us perfect windows to explore other parts of Europe. We were set. 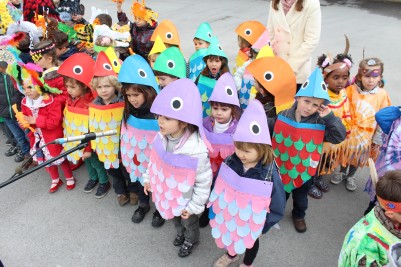 We are teachers to the core. We approach almost everything we do with some type of educational objective. Our core goal for P, throughout her year in the French school system, was simple: learn French. Or rather, continue to learn French, because she seemed to pick up the basics well enough during her pre-kindergarten year at L’Étoile, the excellent French-language school in Cape Breton. We knew that dropping her into the deep end would create distress early on, but we also had faith in our child’s adaptive capabilities. And, in any case, we were all in this together, right? A family that speaks French together stays clenched together.

But P’s first term in maternelle resulted in more clenched jaws than hugs. Her teachers called her inattentive,  inconsiderate, and in a few cases, demonstrably violent. In hindsight, I can see the errors we made. First, we didn’t do enough research into the differences between our countries’ school systems. French classrooms are rigidly structured, even in kindergarten. Moreover, French kids start school younger, so P’s peers were already used to sit-down-shut-up pedagogy, whereas P was accustomed to a lot more flexibility.

Most crucially, P’s educational objectives did not match our own. At five years old, she doesn’t give a toss about bilingualism. If she’d been able to articulate her goals, they would have involved social development – something much, much harder to wrap one’s head around in a foreign culture. Plus this was the year she metamorphosed – it’s hard for me to remember that we called her “him” five months ago. Again, that transition would have been easier on all of us if we’d been at a school, or in a country, that better understands trans issues.

We tried to adapt by changing P’s environment, but the one local Montessori school rejected her after Day Three, once she demonstrated exactly the same behaviours we told them to expect. Looking back, I now believe we fell for a scam. We were desperate, vulnerable parents without much legal recourse. The directrice had designed her tiny school as a sanctuary for her own precious daughter; would she really have been prepared to let a Canadian savage threaten her toddlers’ paradise? Perhaps she was able to convince herself that expelling P was in everyone’s best interests; certainly, the conveniently non-refundable month-and-a-half’s worth of tuition was a big boost for the school.

If we had begged and pleaded, we could gained readmission to public school, but for whose sake? I couldn’t bear to picture P going back to the playground where she’d suffered bullying, or experimented with her own capacity for violence, undersupervised by an insufficient number of overworked teachers. But we had few options left in France, and we weren’t willing to head home quite yet. So we bit the bullet, dialed back our own sabbatical goals, and tried homeschooling.

After all, we are teachers to the core, right? I reasoned that adapting my university-instructor skills to match P’s five-year-old development would be challenging, but not impossible. Homeschooling would give her the flexibility she seemed to need, and it would allow me to nudge her back onto the track of the Nova Scotia kindergarten curriculum, so that hopefully she’d be caught up with her peers upon re-entry. It didn’t require a BEd to see the flaws in this plan – most especially, the lack of peer social engagement – but it was the best we could do for her under the circumstances.

Once again, I failed to judge the height of hurdles. Hurdle One: early childhood education requires patience, sensitivity, and compassion in measures that do not come easily to me. Hurdle Two: P is crafty, and knows what she can get away with when faced with a teacher who is also a parent. Hurdle Three: French public school might be too rigidly structured for our child, but structure still matters, and I couldn’t provide much of it when I was still invested in dragging us hither and yon across Europe. I wouldn’t say the experiment has been a complete failure – we managed to snag two wonderful tutors, Colombian-born Canadian women doing exchange studies in Lille – but if the goal were swimming, we’ve basically been treading water since January.

Meanwhile, the Montessori debacle nagged us like a rotten tooth. A month after the incident, I decided to appeal for help from two directions: I sent an email to the Canadian consulate, and another to the French Department of Education. I wasn’t sure what I was hoping for; a refund would have been lovely, or failing that, at least a copy of the contract we’d signed with them. I thought it should be on record somewhere, that this innocuous private school was scamming families. Mostly, I think I just wanted someone in authority to tell me, “You did nothing wrong” – even if that’s demonstrably false.

Last week, we got a letter in the mail from the French government, indicating a meeting time and asking us to bring all relevant documents. I sprang into action. Our return to Canada had been adjusted, and now we had less than a month left in France; maybe, despite their infamously slow bureaucracy, the French could actually help us gain closure?

The joke was on me. A phone call the day before the appointment made it clear that this meeting had nothing whatsoever to do with my complaint; it was a different department, a different concern. I hadn’t translated the letter carefully enough. The final irony: in our nearly eight months here, P’s French actually has flourished. Mine is still obviously coming up short.

So, I am letting go my thoughts of justice (or comeuppance). In four weeks, P will be back at L’Étoile, in her own country, where she can develop along with her peers, apart from the agendas of her well-intentioned but befuddled Dad. I remain a teacher to the core, but teacher does not equal parent. I still have a long way to go – hopefully my objectives will become clearer once I’m breathing Canadian air once again.