Recently, I wrote about the Walterdale Playhouse’s decision to cancel Othello after receiving criticism, and possibly threats, because their director cast a white woman in the title role. Since then, I’ve seen a different production on a different continent, and it has reinforced my convictions that (a) non-traditional casting should not be off-limits, even when it challenges our ideas about race or gender; and (b) Othello is one hell of a play.

, in the London Globe’s Sam Wanamaker Playhouse, retained the racial breakdown of the principal characters, but beyond that all bets were off. Emilia, the wife of Iago the racist schemer, was played by a black actress (Thalissa Teixeira). Bianca, the courtesan who gets ensnared in Iago’s plot to destroy Othello, was played by a one-armed actress (Nadia Albina). And Cassio, Othello’s lieutenant and the contrived target of his jealousy – the man whom Othello comes to believe has committed adultery with his wife – was played by Joanna Horton.

Cross-casting Othello brings a fresh layer of psychosexual confusion to Othello’s downfall. It’s emasculating enough for Othello to suspect that his wife has been “topped” by a younger officer; it certainly ups the stakes – or at least queers them – if that officer is female. Cassio’s stakes likewise skyrocket; as a female soldier, she would already have fought tooth and nail to prove herself, so losing her general’s favour would surely spell the end of her career. Finally, Roderigo’s attempted murder of Cassio – orchestrated and abetted by the Machiavellian Iago – resonates more strongly with the imminent deaths of Desdemona and Emilia, making the play’s violent misogyny an unmistakable focus in this production.

Experienced visually, Othello is unquestionably as much a play about violence against women as it is about racism. But the language of the play is the language of jealousy. Variations on the word appear 16 times – more than in any other Shakespeare play – festering memorably through metaphors like “the green-eyed monster,” or clustering together like maggots on meat: 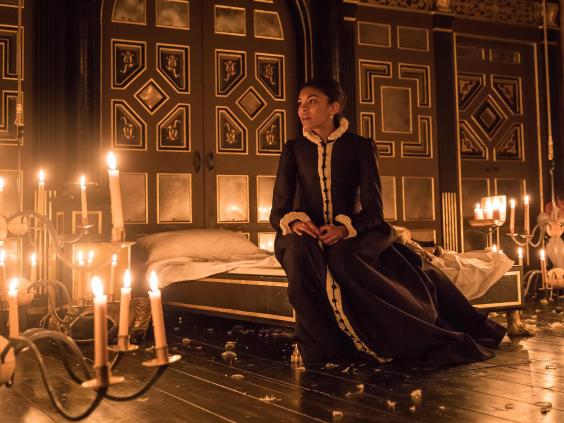 It’s impossible to ignore jealousy in Othello because the characters themselves become obsessed with it. The concept of jealousy extends tendrils, roping in the other themes of the play – not only gender, as in Emilia’s passage above – but also race, as when Desdemona uses her husband’s geographic roots to defend him from accusations of jealousy:

EMILIA: Is he not jealous?

It was rare for Shakespeare to focus so narrowly on a single deadly sin, and it’s tempting to speculate that the Bard must’ve struggled with it in his private life. But so long as we’re speculating wildly, I feel it’s just as likely that Will was a curious outsider, and Othello was his first serious crack at understanding an emotion that he’d never really felt himself. It’s one of the reasons I’ve directed the play twice.

(As an aside: if you get the chance, check out Shakespeare’s second great treatise on jealousy, The Winter’s Tale. It delves even deeper into the harrowing consequences of jealousy, but it also finds its way out of darkness, into redemption and grace.)

Coping with jealousy is a perennial topic amongst polyamorists – or more often with non-polygamous observers who wonder how we manage to keep jealousy at bay. My own replies are disappointing: I’ve never felt it, because I’ve never felt ownership of any of my partners. But some practitioners do wrestle with the green-eyed monster, and win. A great example can be found in this article from Polyamory Weekly. The author’s advice is to find the root cause of your jealousy while simultaneously rendering the feeling absurd and powerless:

Curiously, this is exactly the tactic Othello uses to process the suspicious Iago has seeded within him – but it backfires spectacularly:

Othello begins by imagining himself alone, and full of hatred. But swiftly his thoughts devolve into a self-annihilating rant: 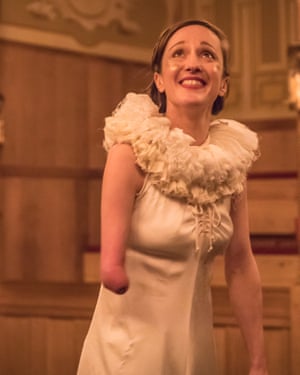 Why can Othello not see the folly of his fears? Different characters answer that question differently. Iago thinks O’s race blinds him to the truth. Emilia blames O’s sex, not his colour. And O famously self-defines as “one that loved not wisely, but too well.” Any of these could be propped up as the “right” explanation, depending on how a director proceeds. But given Iago’s devilish presence, I’d wager that none of those factors – cultural bias, toxic masculinity, excess of affection – would have been enough to affix Othello’s hands on Desdemona’s throat. Iago’s machinations are the cause. The real question might then be, whence comes his jealousy of Othello? And here, Shakespeare is pointedly oblique:

Getting back to Ellen MacDougall’s production at the Wanamaker: amidst many fine performances and stagings, the most electrifying moment for me was when Bianca consoled Cassio by tying her hair into a ponytail. The actress achieved this with one hand and a stump – something I’d never seen before. Theatre should reflect our lives, no question; but it should also show us things we’ve never seen, even things as simple and mundane as that. Unconventional casting choices are one way to do this, and they should be celebrated, not condemned, even if they seem to go against the current cultural grain.