As our time abroad comes to be measured in weeks instead of months, our planning becomes precious; we feel we must choose wisely if we are to snatch up a few final, essential experiences. For who knows when we will be back this way? Sometimes this involves seeking out enriching cultural events, like this week’s field trip to a concert hall, where we heard a symphony play a re-imagined version of The Four Seasons (it was great, though I’m not convinced any re-imagining was needed). Or else I opt for simplicity – sitting in a sun-dappled park beside a 200-year-old cathedral while Lillois practice lawn bowling or slack-rope walking, along with their own form of music appreciation (ie. blasting hip-hop at top volume). Or I seek the advice of the locals. Thus I pressed G, whose impeccable taste in beer led me to De Garre in Bruges, to take us on a daytrip to Amiens, one of his favourite spots. Amiens is a small town in Northern France with a few claims to fame: it played a pivotal role in World War I; it features the largest Gothic cathedral in France (once home to John the Baptist – he was always a head of his time); it was home to Jules Verne, the goofy great-uncle of science-fiction; and it has the hortillonnages, a network of cultivated gardens along miniature canals. We strolled contentedly near the gardens, and P walked the labyrinth on the cathedral floor, and I watched the French teenagers hanging out in parks, and wondered what strange paths their lives would take, and what were the odds that mine had led me here.

As knowledgeable as G might be, he is an expat like me. So when T, a born-and-bred Lillois with family roots in nearby Dunkerque, invited me on an outing, I anticipated a genuine French experience. It had never been my intention to “go native” here, but I figured I’d at least get a taste of what that would have been like.

The trip was also an excuse to shove our kids together, in the perennial hope that they could entertain each other for a spell. I don’t know if this works with other children, but we’ve always had very little luck with it. But T assured me there would be lots of things to keep the young ones occupied, separately or together, once we arrived at the estaminets.

Estaminets. I knew the word, but its meaning had eluded me. Some eateries in Lille identified themselves as estaminets, and G had mentioned they were a uniquely northern phenomenon. But the ones in my neighbourhood always seemed shut, or else they propped up handwritten sandwich board menus with inscrutable spidery script, leaving me too anxious to give them a try. In any case, T assured me that the urban estaminets were not the real deal. “These are like farms, old farms,” He said, “Traditional. Lots of space. Lots to eat and drink.”

T is the only Lillois I know who owns a car. He drove us about 30 minutes outside the city – north, almost all the way to the coast, then just east enough to cross the border into Belgium, although I’d never have known it unless he told me so. The scenery was lovely. French countryside is at its most postcard-friendly in the lush southern provinces, but here was a patch of the North with charm: gentle hills that gave way to three low plateaus, including the evocative Mont Noir. Red brick farmhouses freckled the scene, and each time our one-lane road reached an intersection, weatherbeaten yellow arrows pointed us in all directions, advertising a dozen or more of the nearest estaminets. 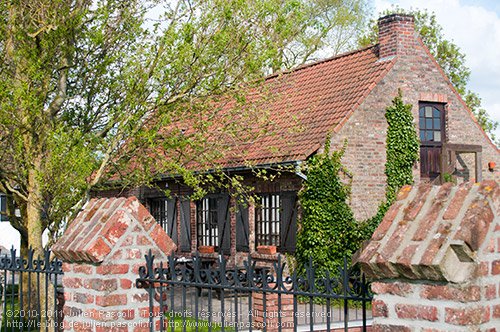 Our first stop was called De Kauwackers, a brick barn with a cartoon crow on the side. The mascot momentarily reinforced my hunch that we were driving into something like Knotts Berry Farm – a family-friendly, kitschy reproduction of an old-timey farmhouse. Then I noticed the crow was holding a mug of beer. Not quite so Disney, then. Still, as we climbed out of the car, I looked around for the hayride, the butter churning demonstration, or the petting zoo. P’s stomach was a bit unsettled from all the curvy country roads, so a petting zoo, I thought, would be just the right sort of low-key activity.

But there were no French – or rather Belgian – bunnies at De Kauwackers. In fact, the only animals we saw at all were a few toy poodles at the feet of their masters. Neither were there hayrides, but instead the kids found a small wooden playground in a sandlot alongside the patio. In fact, this estaminet turned out to be mostly patio – and, on this sunny afternoon, it was packed with locals enjoying selections from what turned out to be the thickest drinks menu I’d encountered since landing in Europe.

“No, they used to be farms where you drink. Now it is better, to make money, if they just serve drinks.”

When in Rome. We sat on the patio, eating charcuterie and drinking potent Belgian brew. P wasn’t impressed with the playground, nor with the long stroll we took afterwards, in order to shake off the effects of the beer just enough for T to drive us to the next spot. “This one, she will love,” He assured me. “I always would come here as a kid. It is really something special, you know.” 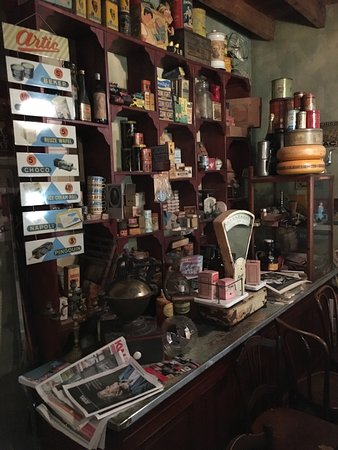 I was dubious. I knew that French parents were more permissive about alcohol, but surely T’s precious childhood memories did not revolve around beer menus? De Barbier – also in Belgium, but a stone’s throw from France – was delightfully cluttered with vintage bric-a-brac, in a way that reminded me of some of the franchise restaurants from my own youth. Okay, I thought; if I can wax nostalgic over the artificial kitsch of Maxwell Taylor’s, then T’s authentic kitsch deserves a chance. Also, the food turned out to be great, plus they had one of my favourite beers.

I drove back to Lille sated, and feeling I understood a bit more about France. I came here to soak up History with a capital H; as a Canadian, anything older than three centuries is awe-inspiring in its ancientness. But in France, ancient is commonplace. T felt drawn to something old, not ancient – something that resonated with his childhood, and perhaps with moments when his parents and their friends were sociable. “Estaminets,” he explained at last, “are where you can relax. They don’t make you dress up. And you can bring your dog.” Or your child.