Wherein all our hero wants is a phone number.

Theseus was a hero who would not take bull from anyone. To save the Athenians from Cretan tyranny, he had to navigate a labyrinth and slay the ferocious minotaur – then, worst of all, he had to find his way back out again. Of course, a modern-day Theseus would have found this a cinch, what with his cell phone’s GPS. Nowadays to survive, a hero doesn’t need a magic sword, just a reliable service provider.

My first week in France, I am Theseus and Lille is my labyrinth. And I am in desperate need of a sim card, for though I loathe my iPhone and all it represents, it remains a mere glorified Walkman so long as it bears its Canadian card. The minotaur I seek to slay – the latest symbol of French tyranny over this plucky Canuck – is a piece of paper, issued by X’s kindergarten, and still bearing an empty space where my phone number should be.

Most heroes have some sort of dependent, to humanize them and to raise the stakes of their quests. Fisher Kings seek to protect entire nations from drought, while Spider-Men just have Aunt Mays back in Brooklyn. Whenever Theseus needed a dependent, he’d abduct one – he was old-fashioned like that. My weak spot, my dependent, the thing that turns me from an Achilles into a heel, is my son.

Witness X’s first day of school. By this time, S already had a French phone number, not because she’d manage to unlock the phone she’d brought from home, but because she’d bought a “burner” – a cheap French mobile with a pay-as-you-go plan. Midafternoon, we’re on Rue Royale when the new phone rings. Who even has her number? One bank; the company who sold her the phone, maybe…and kindergarten. S picks up, already panicking. The flood of French on the other end contains the word “enfant.” In terror, she passes me the phone. “Est-ce que c’est la maternelle?” I ask. “Non,” they say, “c’est la garderie.” That word means “babysitting,” but it also refers to an after-school care programme at the school. We didn’t sign up for it – X should still be in class – but did we get the schedule wrong? Have his normal teachers all died in a terrorist attack? Is “garderie” the name of a terrorist cell?!? My heart hammers my chest as I try to speak clearly. “Ou est mon fils?”

False alarm, of course. The caller represents a home babysitting group, to which S had sent an email earlier that day. I tell them I’ll call them back, and hang up to catch my breath.

You can see how badly I need a phone of my own.

A good hero’s journey involves three gates, three keys. There’s a sage to guide them, maybe a magic token, and a plunge into the belly of the beast. My first stop doesn’t feel beastly at all; G, my sage, has recommended a high-end tech franchise called Orange, which I find with ease the morning after my cardiac phone call with the babysitters (we never did call them back). 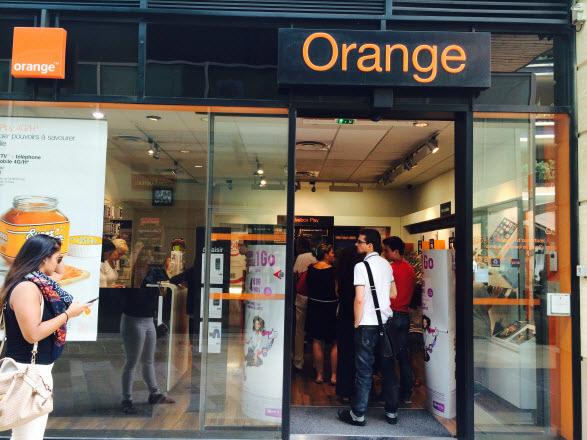 Orange is bright and inviting, with free wifi and charging stations. Its wares include everything tech, from kids’ toys to VR goggles. I tell the greeter why I’m there; they take my name and sit me down, and within seconds an olive-skinned employee with heavy mascara appears. I explain my quest again. She asks me for my passport.

My second trip, an hour later. Now I have the magic token. I’d thought it was the iPhone itself, but that’s bad mythography; if I am Theseus, the iPhone is my sword, in need of enchantment. The passport is the token, the key, the proof that I’m a hero, not an international phone thief. Fine. Except, upon my return, Orange is busier. Between the greeter and the new helper, I wait 15 minutes.

This time, it’s a well-coiffed male manager who nods as I recount my story: “I have a pay-as-you-go account with Virgin in Canada. They told me the phone is unlocked.” He fetches a French sim card, tiny as a diamond as it slides from its hermetic pouch. I watch as the manager performs the transplant. But then, while he fiddles with the screen, my attention wanders, drawn by the siren lights and screens throughout the store.

“Non,” he says, abruptly, “It is not unlocked. You must take it to Apple, up the street. They can fix it.” And, abruptly, I’m ejected from the temple for the second time.

I do as I’m told, but I start to feel lost, discouraged. Am I inside the maze yet, or still at the gates? Do I really even need a phone number after all? What is the problem lies with Virgin, back in Canada? The Apple store is even more antiseptic than Orange, and this time I don’t even get past the greeter. He rolls his eyes at my request; they’d never trouble themselves with matters as plebeian as cell service at an Apple store.

And so I give up. I resign myself to sharing S’s French number, and start thinking of my iPhone as the glorified Walkman that it is. I put a year’s worth of good tunes in there before I left home. So, all is well. Right?

Well…labyrinths are tricky. Sometimes you find yourself inside the belly of the beast without having noticed the moment you’ve been swallowed. So, as the retired hero sits down and orders a beer at his local bistrot, he checks his phone (also a glorified watch) to find that, not only does he lack a carrier, but he also lacks music – podcasts – photos – everything.

The slick-haired manager had not replaced the original, Canadian sim card. The iPhone has a French card which it cannot use. My enchanted sword was cursed – more useless than it had been at the start.

Next: The Third Gate. The Labyrinth of Protocol. Our Hero Takes the Bull by the Horns.