Is there any form of transport more civilized than rail? You might not think it, to travel by train in Canada, where our ambitious, continent-spanning rail empire has shriveled down to a smattering of grungy, truck-stop stations linked by shabby trains with erratic, unhelpful timetables. Here in Europe, it takes only a small taste to realize: train travel is the champagne of getting there.

When I was 12, I went to Victoria and Vancouver on a class trip. The destination was Expo ’86, a world fair whose theme was “transportation.” Accordingly, the teachers booked a range of travel methods: fly to Victoria, ferry to Vancouver, then a train through the Rockies back to Edmonton. Perhaps they too sensed the grandeur of the rail, and saved it for last as a reward. Instead, it was a hellish epilogue – 30 kids suffering from burnout and puberty, trapped in a passenger car for ten hours straight.

The experience put me off trains until I hit 18 and had to buy a Eurail pass. Back then, the pass was de rigeur for North American backpackers who wanted to explore Europe unfettered by a fixed itinerary – this was before both the EU and the World Wide Web, so unless you knew a lot of languages, the only reliable way for an unshaven Canadian to get across borders smoothly was flashing the pass. Yet somewhere around Brindisi, Italy, I discovered a subtle distinction between getting a spot on any train in Europe … and getting a seat. Still, standing in a clattering car-connecting corridor for hours in order to get to Paris didn’t feel so hard. It was better than sitting in the Hormone Car for hours to get back home.

Even then, I did not really appreciate train travel as an experience; it was merely an efficient way to get to somewhere cool. I could vaguely understand why some of my fellow geeks collected train maps, or played board games like Ticket to Ride, and I even dabbled myself with a Railway Tycoon-style computer game briefly – there is something oddly satisfying about laying down imaginary tracks so that an imaginary train can chug along them. I get the appeal of classic steam trains. I get Thomas the Tank Engine. I just didn’t get actually getting on trains.

This trip has changed that, almost from the first moments. We flew into London (air travel – expensive, uncomfortable, and an environmental travesty), caught a Tube (smelly, noisy, crowded), then boarded the Eurostar. The boarding process was a bit disorienting (Security and customs in a train station? Crikey!), but as soon as we disembarked – calm. Comfort. Shortly we were being rocked maternally across the English countryside at incredible yet nearly silent speeds. Then we went under the ocean for awhile.

For me, the magic doesn’t come from watching farms whiz past, nor from the cushy seats. It’s more about achievement. A single high-speed train can cover 1,000 km in a few hours, carrying hundreds of passengers in an efficiently straight line. It can run day and night without refuelling, and thanks to the undervalued efforts of railworkers (in Canada, most of them were Chinese labourers working under terrible conditions for little or no pay), they can charge through forests, across canyons, and through mountains. It’s fine to admire airplanes for mastering the sky, but let’s not overlook the obstacles inherent in conquering the ground.

An equally Herculean effort is made daily throughout the world to keep the trains running on time. That this, the highest praise of punctuality, is so often misapplied to Mussolini says much about Mussolini but more about trains. I never fail to be awed when I set foot in a gare, in Lille or Paris or London, and I see the numbers and destinations scrolling up the screens overhead. I generally arrive far too early to catch my train, because as a Canadian I am accustomed to slow airport security; however, European tickets chide me, insisting that I be “on the correct platform two minutes before departure.” Two minutes! That is a show of confidence. 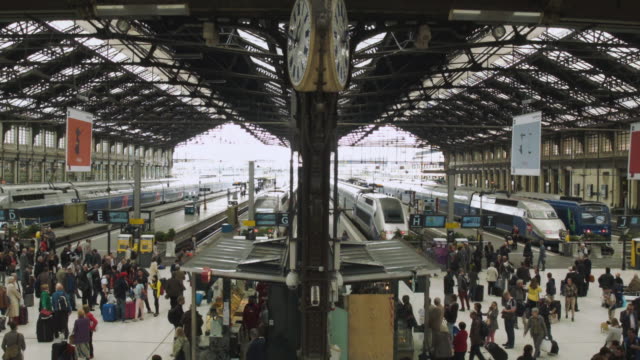 Alright, I confess: I arrive early in European train stations because they are themselves things of beauty. In the height of winter they are cold as tombs, but they are invariably marvels of architecture, with soaring sky-dome roofs and elegant stone façades, often punctuated with handsome Roman clocks. And while the crush of advertising has killed some of their charm, there are usually a few austere works of art up high, above the flickering video billboards and franchise kiosks. Gare Lille Flandres has a piano for travelers (or their kids) to play while they wait for their train’s platform to appear on the screens. Like an airport, a train station is not designed to encourage people to linger; but unlike most Canadian airports (and – shudder – bus stations), these buildings seem to acknowledge through their contours that important things happen here. Departures and arrivals can transform lives; reunions or separations can seal or break hearts; awesome adventures have their first chapters set in spaces such as these.

Soon, our friend GB arrives via Paris for a ten-day visit. It will be her first time outside North America. She flies into Charles de Gaulle airport, but I kind of want to blindfold her until the Metro deposits us at Gare de Lyon. Or perhaps we’ll go directly to the Musée D’Orsay, my favourite museum in the city, partly because its unparalleled collection of Impressionist paintings is housed in a former Beaux-Arts train station. There are a million things to show someone in Paris, but I can’t think of any better place to start.