I’m no mathematician, but if monogamy is about finding the right algebraic equation to create balance and harmony on both sides of the equals sign, then polyamory is calculus. And in the same way that I never actually learned calculus in school, I did not join the polyamory platoon with an instruction manual; hardly anybody does. I know that calculus is the study of continuous change, and I know that you can’t build a skyscraper without it. And, as I’ve learned, polyamory can also be about building elaborate, nigh-impossible structures, all of which carry the risk of collapse if you neglect to check your math.

Yet for all the elegant artistry that goes into its engineering, polyamory gets a bad rap, and that’s because, from an outsider’s perspective, it looks more like a French farce than careful choreography. A couple of weeks ago, our melange of relationships had one of those nights that Feydeau would have loved, with all the doors opening and closing. Yet our farce lacked the key ingredient that lends Feydeau’s comedies their energy: the frisson risk of getting caught.

It went down like this: my GF needed a place to crash on Saturday, because her husband was holding a kink party at their house. It’s not that GF isn’t kinky, it’s just that her husband, for whatever reasons, wants to keep his sex lives separated. Before they got married, they knew they would both maintain pursuits outside their primary relationship. In the husband’s case, this gave him free reign to explore the local kink community; while for GF, their ever-evolving mandate led her through a series of flings and/or relationships with individual men (and women), before hooking up with me. 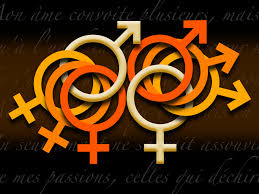 We’re all friends, so even if sex had had nothing to do with it, I still would’ve offered her a place to crash. But with intimacy in the bargain, there’s an extra question on the table: when your GF sleeps over, do you spend the night in bed with your wife? Or your GF? Does the answer to the question change if our schedules haven’t been able to match for more than a week?

In this case, I decided that the “right” thing to do was to stay in my own bed. I put “right” in scare-quotes because it’s easy to paint oneself into an ethical corner, trying to second-guess everybody’s needs and tiptoeing around traditional concepts of morality. In this case, we simply talked it all through, honestly and with patience. And in the end, since all of the grownups basically shrugged and said “Whatevs,” I went with the choice that felt most “right” for the one participant who didn’t get a vote: my kid.

Let me say here, in the plainest possible terms, that I think exposure to polyamorous parental relationships threaten harm to children to the exact same degree that same-sex relationships do: not in the slightest. My child is going to observe all kinds of relationship dynamics – at home, in other kids’ homes, in the media, etc. – and the only relationships that threaten harm to her are dysfunctional or loveless ones. If a role-model relationship is healthy – that is, if it’s composed of partners who treat each other with compassion and respect – then it doesn’t matter how many bodies are involved.

If I haven’t been completely forthright with my six-year-old about the details of my extra-marital relationships, that’s only because they don’t interest her that much. She knows I have a GF, and that her Mom has a BF, and at this stage, that’s all she cares about. In fact, she was probably delighted to hear that GF was coming to stay with us that night, rather than having to lose out on Dad time. (I generally try to keep my trysts confined to school hours, but once in awhile I take a night out.)

Anyway, the decision to sleep with my wife was a practical one: sometimes P wakes up in the night, and needs a hand settling back down again. If I was on the same floor as the kid, I could lend a hand. That’s what “right” amounted to on this particular Saturday night; it wasn’t about the risk of trampling on people’s feelings, it was about positioning myself where I could do the most good.

However, that decision changed when my wife received a text from her BF, saying he was available that night as well. And here’s where the French farce kicked into high gear.

Whereas GF and I have been dating for over three years, S’s relationship is still in bloom. Moreover, GF and I are both self-employed, with relatively open schedules, but BF has less flexibility. He’s the primary caregiver for a large family, plus he has a job that puts him on-call much of the time; the combination results in frustrating last-minute cancellations or scheduling changes. Finally, he is still in the delicate process of defining this new relationship vis a vis his spouses (yeah, he’s got two primary partners already. Nobody ever accused polyamorists of being smart). For all these reasons, it was a big deal for him to get a Hall Pass for the night.

So the bed-equation became quadratic. A flurry of conversations followed, texted and spoken, as we all tried to reassure ourselves that everyone else was content with the idea of four grownups pairing up under the same roof. A further complication arose when I remembered that Saturday night is when I shack up with my other lifelong love – Dungeons and Dragons. It’s an online game, so I could put all my gaming buddies on a laptop and take them into bed with me. After all the planning, kid-wrangling, and late night gaming, I think most of us were too exhausted to do anything but snuggle.

As always when I write about polyamory, I fret that my observations come across as boastful. But I guess this time, I’m going to allow myself a bit of pride – but not for any sexual conquests (if you’re not past bragging about that stuff by the time you’ve hit 40, you need to grow the fuck up). My pride comes from being able to juggle relationships and personalities – some of them occasionally volatile (I love you all!) – without anyone getting hurt. I know I’m not doing that job solo, of course, but when the team all settles down beneath my roof, I can’t help feeling instrumental in the calculus of contentment. We’re building a skyscraper, or a temple, or something – there’s really no name for it at this point, but I know it’s beautiful.