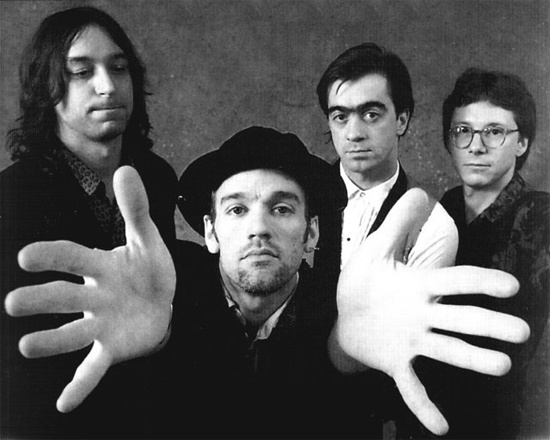 After that last ice-water-to-the-face blog post, I figured I owed my devoted readers something a bit more upbeat. Whenever I need a pick-me-up, I turn to music, so let’s dip into one of my perennial loves and obsessions, a defunct band from Athens, Georgia, who spend the 80s and 90s walking the line between alternative and mainstream, and the subsequent decade paying for their audacity with diminishing (though never boring) returns. I’m talking about R.E.M., and I’m excited about them again because of a comedy podcast that recently shifted its focus onto the band.

R.E.M. was a genre-defying band in a time when genre was becoming increasingly important to marketing. Record stores, radio stations, and MTV (or the Canadian equivalent, MuchMusic) relied upon careful delineations between classic rock, new wave, folk, and country. R.E.M. sounded like none and all of those, so they spent much of their early careers relegated to a nebulous “college rock” category. But their sound was too exciting to stay confined to the margins, so bit by bit, they broke wide: first with singles like “The One I Love” and “It’s the End of the World as We Know It (And I Feel Fine),” then with whole albums like 1988’s revelatory Green.

About a year after its release, I scored a copy of Green on cassette and listened to it obsessively. The songs made very little sense to me, but the combination of Peter Buck’s jangling, frantic guitars and Michael Stipe’s hypnotic voice put a hook in my teenage brain. I remember scrutinizing the lyrics to “World Leader Pretend” as if they were Hamlet – and, indeed, they struck me as a similarly apt metaphor for the internal strife and social paralysis likely to seize a bright, awkward adolescent boy:

I sit at my table and wage war on myself
It seems like it’s all, it’s all for nothing
I know the barricades
And I know the mortar in the wall breaks
I recognize the weapons, I used them well

In the same song, Stipe sings “I raised the wall and I will be the one to knock it down” – and then, later, “It’s high time I’ve razed the walls that I’ve constructed.” Today, I marvel at the audacity of a lyricist willing to play on the homophones “raised/razed.” Back then, I zeroed in on the “wall” metaphor, adopting and personalizing it until it represented all my inhibitions and shortcomings. It would take me another few years to raze my personal wall, but when I finally did, R.E.M. was waiting for me, growing alongside me through the 90s with an astonishing run of puzzle-box albums unmatched since The Beatles.

It’s no exaggeration to say that, prior to R.E.M., I merely listened to music. The band taught me songcraft, the idea that every song and album involves conscious choices, just as a poet chooses every word to reverberate with those around it. And it didn’t hurt that Stipe’s lyrics were poetry, often written from the perspective of fictional personae very different than himself (though not always – see below). On an album like 1994’s Monster, even though the sound of the music was consistent from one track to the next, each song was like meeting a new character. For a burgeoning playwright like myself, this was a masterclass – how to sketch out of a fully-formed character in three verses and a chorus.

Sometimes, though, Stipe was honest and direct and vulnerable in a way I’ve rarely heard from male vocalists. I particularly love the lyrics to “Walk Unafraid,” from the underappreciated album Up; they are a hymn to nonconformists like himself, a credo to lay oneself bare and celebrate the pain that can result:

Say “keep within the boundaries if you want To play.”
Say “contradiction only makes it harder.”
How can I be what I want to be?
When all I want to do is strip away
These stilled constraints
And crush this charade
Shred this sad masquerade
I don’t need no persuading
I’ll trip, fall, pick myself up and
Walk unafraid
I’ll be clumsy instead
Hold my “love me or leave me” high

But his most famous confessional comes on 1991’s Out of Time, an (almost) perfect album from a band at the absolute top of their game. The second track, “Losing My Religion,” was one of R.E.M.’s biggest hits – which is remarkable for a song that’s essentially about coming out as bisexual:

Every whisper
Of every waking hour
I’m choosing my confessions
Trying to keep an eye on you
Like a hurt lost and blinded fool, fool
Oh no, I’ve said too much

Out of Time is such a weird album – so unabashedly country in its sound and subject matter (it has a track called “Texarkana” for crying out loud), yet populated by big, incongruous hits like “Radio Song” and “Shiny Happy People.” I enjoy those songs, but what keeps me coming back to this album are the heartwrenching doomed-relationship ballads on the B-side: “Belong” and “Country Feedback” in particular are tragedies in miniature, perfectly blending droning minor-chord guitars with visceral images: “The flower is scorched,” “You come to me with a bone in your hand,” “She stood and whispered to her child: ‘belong.’” R.E.M. provides the briefest, most elliptical glimpses of people in vulnerable moments, and yet somehow makes you empathize with a full heart. It’s spiritual sleight of hand.

But I’m always happy to help improve on perfection. The aforementioned podcast reminded me of a pastime I’d left behind with my dual-deck cassette recorder: the resequenced album. Here, then, for my own entertainment, is a resequenced playlist for Out of Time, in case you feel like listening to an even more perfect version: