Creation is a funny business. One year ago, I was hard at work on a novel called A Muse of Shadows. It was hardly the first novel I’d ever tried to write, but it felt like the first one I would finish. Despite a strong start, I got distracted first by family, then by travel, and finally by work. Now it’s a year later, and although my schedule may have relaxed enough to admit a bit more writing, I haven’t returned to Muse. Not even National Novel Writing Month provided a sufficient lure to draw me back into it. I have been too busy writing about talking animals.

Who would’ve thought it? When I took my daughter to see the 35,000-year-old cave paintings at Chauvet, I wasn’t looking for inspiration — at least, not for me. She was in the midst of an artistic phase, and it wasn’t every day we had a chance to see some of the world’s earliest surviving artwork. Nor was I seeking inspiration at the Artis Zoo in Amsterdam, but I lingered longer than my daughter did at the aquarium tank that housed the lungfish.

In both cases, I was intrigued by a sense of history that went further back — much further back — than the 19th century setting of my hibernating novel. It never occurred to me to change the subject of my novel to feature cavemen or prehistoric fish. Instead, those seemingly random seeds of inspiration took root in the familiar soil of the stage. In this case, write what you know did not apply to the message, but it did steer me back to the medium I’ve been using for decades.

(An aside: I recently switched offices at the university, and I decided to decorate my new space with all the old show posters I’ve been hoarding since 1992. This week, a young student was sitting in my office while I read over something, and I watched as his eyes combed over the dozens of posters. Finally, he asked in a reverent tone, “Did you work on all those shows?” Yep, I’m old. And I’ve kept myself busy.)

I have this creative tic. I call it “The Eleventh Hour Loophole.” It’s when inspiration strikes and I start writing something brand new and super-exciting…right when I have a deadline looming for some other writing project. The “loophole” part is my justification: it’s okay to be not writing if I’m writing something else, right?

The first Good Animals scene wasn’t quite an Eleventh Hour Loophole creation, but it was close. Back in February, when I stole a few spare minutes to write a ten-minute scene about a bickering lungfish couple, I hadn’t completely given up on the idea that Muse would rise again…but I was up to my neck in homeschooling at the time, and I simply couldn’t carve out the time to finish a novel. So the lungfish scene was a weird sort of “screw you” to my circumstances, or even to my own assumption that I’d become too busy and stressed to be creative. Call it a Back-to-the-Wall Burst.

The only thing that allowed me to write the scene at all was my certainty that a scene about dysfunctional fish would never, ever go anywhere. Often in the past, I’d write a single scene as an exercise, then find a way to expand the characters’ journeys into an entire play. Truth Factory started as a short scene about two bullshit artists brainstorming headlines for a tabloid newspaper. And First Time Last Time, eventually a full-length play, spent its first five years of life as a short, self-contained scene about a seduction gone awry. But “Best Fin Forward” (the lungfish scene) was never going to spawn a full-length romantic comedy about primordial fish. Right?

Flash-forward from February to May, when the itinerant playwright found himself back in his Home and Native Land, not yet employed and (as always) anxious about his next potential paycheck. The freelance artists’ bible states that, if there is an upcoming deadline for an Independent Artist grant, and if you haven’t received any funding from that particular grant within the allotted time (usually one year), then you MUST apply. To pass up an attempt to avail oneself of the government’s paltry arts coffers would be unthinkable. 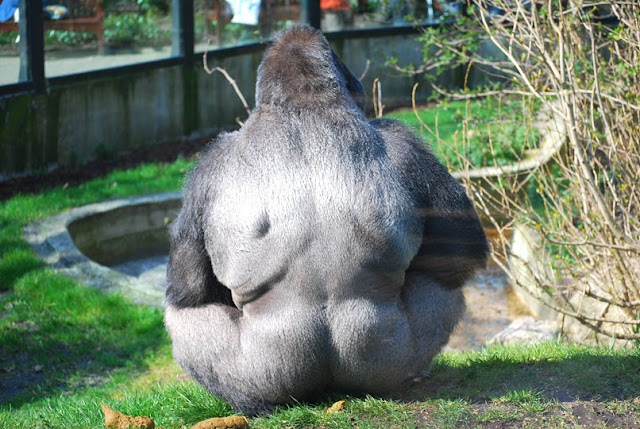 So I applied. I didn’t have an idea for a play in mind, but I had an idea for a “play cycle” — a collection of mostly unrelated scenes with some sort of thematic link. And I had a sample that I could include — “Best Fin Forward,” in all its hastily-scrawled glory — which, along with my track record (remember that office full of posters?), ought to be enough to convince a grant jury that I meant business.

In this case, “business” involved a collection of seven scenes that recorded the history of the world, from the dawn of land-walking animals to the collapse of civilization under the weight of climate change…but all from the animals’ point of view. My grant app included an impassioned argument for empathy — how can we care about the environment unless we care about the creatures who inhabit it? — but mostly, I think it was the novelty that sold it. How many plays have been written about the Enlightenment, or the Cold War, or about cyberbullying? Ah, but how many of them have featured elephants, parakeets, and chimps?

In my hubris, I actually applied for two grants — one, for subsistence money to write the “play,” and another, to take the scripts into high schools, where students could use the scenes’ scientific, historical, and philosophical content as springboards for extra-credit research projects (or something). And for my sins, the Government of Nova Scotia gave me both grants — more money than I normally make in a year at CBU. Suddenly, my Back-to-the-Wall Burst of creativity was a cash cow. But now I actually have to do it.

This week, I visited a local high school, where the Drama teacher had gathered 18 enthusiastic students to help me work on the project. After its development process, both the AD of a local theatre company and one of the best actors in town are keen to get the show produced professionally. I’m trying not to count my lungfish before they’re hatched, but the lesson here seems to be, write what you know — in my case, write for the theatre. I can live with that.