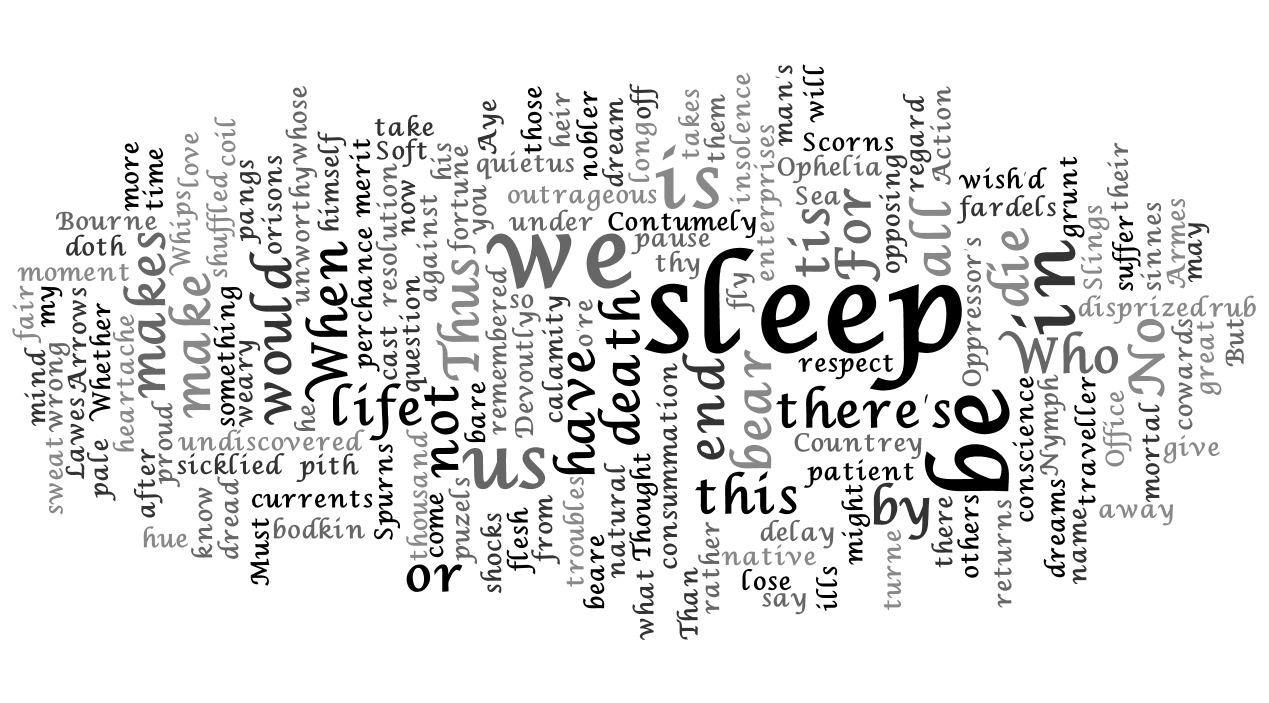 We couldn’t put it off forever, so this afternoon, with no one else around to make us feel self-conscious, WJC and I tackled “To be or not to be.” I hope it will be the first of many intense 90-minute delves into this dense little goldmine of a speech. For both of us, I think, it’s simultaneously a comfortable old friend from our younger days and a terrifying vortex of unknowns. I aim to preserve both for the audience, so they can find it both familiar and uncanny.

Compared to some of the other soliloquies, our “To be” is largely untouched. I only tweaked a few works that I found way too archaic to work:

Th’oppressor’s wrong, the proud man’s contemptuousness…
That a patient man of the unworthy takes…
With a bare bodkin. Who would these burdens bear…

I feel bad about all those little changes, like I’ve drawn a few mustache hairs on the Mona Lisa. I couldn’t bring myself to lose “bodkin” (or “quietus”). There’s no real method to the madness, except a gut sense of how best to make the speech accessible. If I were a Shakesgeek hearing it spoken, the words would sound like notes played wrong. But my audience will not be made up of Shakesgeeks (most of them will probably be in the cast). It’s clarity first, dammit!

The other heresy I’ve committed involves moving the speech from its usual spot in 3.1. I’ll talk more about its placement in future posts, but in this rehearsal we tried to isolate the content from any context, just so we could come to grips with its internal structure.

First, as always, I had WJC read, then scan, the speech. It is a surprisingly smooth bit of blank verse, with only a few irregular lines.

Then, I had him split the speech into three sections, to help tell the “story.” Most Shakespearean monologues divide like this very easily, if you have even an inkling of what’s being said. It’s a rhetorical structure: thesis-antithesis-synthesis, or question-debate-resolution.

To be, or not to be – that is the question.
Whether ‘tis nobler in the mind to suffer
The slings and arrows of outrageous fortune
Or to take arms against a sea of troubles
And by opposing end them; to die, to sleep –
No more, and by a sleep to say we end
The heartache and the thousand natural shocks
That flesh is heir to: ‘tis a consummation
Devoutly to be wished – to die: to sleep –
——————————————
To sleep, perchance to dream – ay, there’s the rub,
For in that sleep of death what dreams may come
When we have shuffled off this mortal coil
Must give us pause: there’s the respect
That makes calamity of so long life.
For who would bear the whips and scorns of time,
Th’oppressor’s wrong, the proud man’s contemptuousness,
The pangs of despised love, the law’s delay,
The insolence of office and the spurns
That a patient man of the unworthy takes,
When he himself might his quietus make
With a bare bodkin. Who would these burdens bear
To grunt and sweat under a weary life
But that the dread of something after death
(The undiscovered country from whose bourn
No traveller returns) puzzles the will
And makes us rather bear those ills we have
Than fly to others that we know not of.
—————————————–
Thus conscience does make cowards of us all –
And thus the native hue of resolution
Is sicklied o’er with the pale cast of thought,
And enterprises of great pitch and moment
With this regard, their currents turn awry
And lose the name of action.

The next step involved choosing a keyword for each line, then reading the speech section-by-section…using only the keywords to tell the story. The result helped to clarify the most important ideas and the relationships between them:

There are some keywords I would have assigned differently, but WJC’s choices do the job of telling the soliloquy’s story, especially in the first section. Hamlet gets more abstract as he goes along, and many lines in the middle contain multiple items in a list, so the exercise loses some steam. But it’s plain to see the core contrasting elements of the speech (Suffer vs. Sleep, Sleep vs. Dream, Respect vs. Insolence, Weary vs. Dread, Conscience vs. Resolution), as well as its overall tone (Heartache, Weary, Dread).

Finally, we delved into the overall meaning — again, keeping it as divorced from its context as possible, because in many respects it is a self-contained set speech — quintessentially Hamlet, yet fundamentally apart. It works as a meditation on suicide, even though the speaker only alludes to suicide once otherwise. Yet it also works as a struggle with identity, or against paralysis. “To be or not to be” doesn’t need to refer to life or death. Those ideas come up in the speech, sure, but not so much in Part 1. Casting his net more broadly, Hamlet may be using life and death (or suicide, for that matter) as examples of something even larger. That’s right, Hamlet is officially larger than life.

“To be [to act, to have an effect], or not to be [relevant, significant, impactful], that is the question.”

WJC and I didn’t settle on a single interpretation, but it was illuminating to see how much clearer and more direct the entire speech became once we’d put them on the table. I think it allowed Hamlet to really pose the questions to the audience (just me, in this case). A struggle with suicide is usually a private matter. But these other questions — Who am I? Am I capable of action? — require an outside eye to answer, so Hamlet isn’t just ruminating on The Question: he’s really asking it, and he needs an answer.