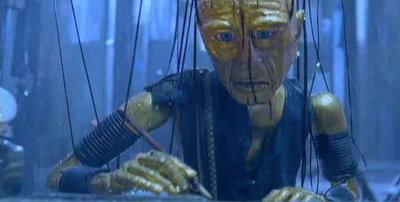 From “Strings: A Marionette Drama With Tangential Connections to Hamlet.”

This weekend, another run-through — the lights stayed on for us this time, and our Hamlet was present. It was our last rehearsal before the holiday break. Hamlet holds its breath until January 10th, and when we come back, it’s a break-neck ride to opening night.

I told the cast to make their theme for the run “generosity” — a bit off the cloth for a tragedy, I know, but just because we’re telling a story of sin, corruption, and murder doesn’t mean we have to be uncivilized about it. And the cast was indeed considerate, helping each other through the patchy bits when their lines or blocking let them down. And impressively, those lost-in-the-fog moments were few and far between. With the exception of those few actors who were sick, or eyeball-deep in exams, or both, I’d say this cast is at a confident place as we head into our hiatus. And that was always my intention.

Now, what about the director? Is he in a confident place? I think I can answer with a qualified “yes.” There are so many moving parts to this production that it’s hard to get perspective on the big picture–but I suppose that’s sort of my job description, so I’ll try.

Most of the essential design elements — set, costumes, and lights — are in good hands. The set gave me the most heart attacks early in our process, when the Boardmore’s long-standing designer unexpectedly retired. We found a competent replacement, although he is more a builder than a designer, and there is a communication gap as I try to translate my artsy-fartsy intentions into terms he’ll understand. So far, we seem to be on the same track, but I won’t be surprised if we end up having to simplify at the late stages of the rehearsal process. And I can live with that; Shakespeare did just fine with a bare stage, after all.

Costumes could have been another nail-biter, but Brad and his team are bringing the magic in ways that suggest he’s wholly on board with Hamlet’s Gatsby-nightmare-fantasia concept. More than anything else onstage, his costumes will convey the broad thematic strokes I’ve been obsessing about: Elsinore as party central, “something is rotten,” and the encroachment of the supernatural. And although the lighting design hasn’t taken shape yet, I’m confident that Ken will pick up his cues from Brad and create an expressionistic design quite unlike what the Boardmore audience is used to seeing.

It’s unfair to call props or sound peripheral, but they are less crucial to my concept. Even so, we’ve found some ways to work some motifs subtly into the props design — snakey detailing on Claudius’s cane, or blood-red inside the ubiquitous wine goblets, floral fabric encasing Ophelia’s body — that will help to reinforce our themes unconsciously, which is probably better than hitting an audience over the head with them.

My sound design is complete, at least in my head. I’m not sure if my appointed sound designer will have the time to make it a reality, though; and while I have the technical know-how to do most of it myself, I may not have the time, especially once we’re back into rehearsals. And it would be a shame to lose what I’ve got in mind, because even though I’m borrowing a lot of music cues from film soundtracks, I think I’ve isolated some sweet Hamlet-y sounds — portentous, timeless, restless, urgent — and I know from past experience how much a well-crafted sound design can propel a show into a higher emotional register.

Then there is video, about which I am less certain on all fronts. We have some preliminary video material for one transition (the Ghost leading Hamlet away), but I don’t know for sure what projectors will be used, or which software will be able to handle them. And that footage is only a fraction of the material I’d hoped to incorporate into the show. Now time is running out, and I haven’t seen enough material so far to inspire my confidence. It’s probably not too late to pull the plug, and say “no projections” — but I’m not sure that it needs to be all-or-nothing, except for the fact that incorporating projection screens into the set is a headache and a half.

It’s true that no audience members are going to feel cheated watching Hamlet without video. And it’s better to watch a video-free Hamlet than a Hamlet with clumsy, half-baked video sequences. But shouldn’t I have faith in my team? It’s a tough call, and it’s why I get paid the big bucks (yeah, right).

In spite of my anxieties surrounding video, there will definitely be some unexpected treats for audiences in this show. For one thing, the Mousetrap has evolved into a peppy, quirky, increasingly demented little dance sequence, courtesy of Cynthia Vokey’s choreography. Baillie Ferguson’s makeup, inspired by the non-intuitive colour schemes that black and white-era film actors had to wear, makes the dancers look sickly and/or devilish, while Brad’s costumes keeps them rooted in the glamour of the 1920s. It’s unique, and it will serve as a well-placed reflection of Hamlet’s inner dementia.

And then there are those fights. I’m so looking forward to seeing how an audience reacts to the moment when Hamlet and Laertes whip out daggers to complement their swords and tuck into it, four blades flashing in a steel whirlwind across the stage. Conveniently, I’ve cast myself as a peon who’s standing upstage at the time, so I get a front-row seat to watch the front row.

When all is said and done, however, it’s not the fights which will make this Hamlet memorable — nor the dance, nor the costumes, or the set, or the video sequences. All those elements are there to put the performances into stronger focus and relief — we don’t come to see Shakespeare for the dancing, we come for the Shakespeare. The big question, then: is this cast capable of bringing the Shakespeare?

In one of our first rehearsals, I said that modern acting was all about mind and muscle, but Shakespeare is about breath and bones. It was a new maxim for me, and I wasn’t completely sure what I meant by it, but it felt right. Certainly, breath work has long been a cornerstone of my approach to the verse and the language: find your keywords, suss out the rhythms, and then keep your breath topped up, line to line, so you can bounce those big, beautiful words off the back of the auditorium. The breath is coming, albeit slowly in the case of some cast members. But what about the bones?

Much of the early character work I did with Hamlet, Ophelia, and Claudius focused upon the steps in each characters’ journey. Those steps are in place now, and they are mostly clear, although I predict they will only get crystallized once there’s an audience in place. Actors who worry about transmitting a clear narrative forget how theatre works: it’s all about the now. The audience wants to be here, now, in this moment. What came before and what comes next…those things matter, sure, but they don’t have as much of a bearing on the moment as we think. Nobody in the history of theatre, when listening to “To be or not to be,” has been thinking, “Too too solid flesh.”

I think what I meant by the bones is related to that sense of immediacy. Hamlet is a play preoccupied with masks, disguises, and role-playing, but the audience is almost never fooled. They want to feel the presence of these rich, complicated, messed-up characters — they want to share the air with them — and to convince an audience that Hamlet is in the room, the actor has to commit with everything he’s got. He can wear “melancholy” or “antic disposition” or “now might I drink hot blood” like masks, to be used and then discarded…but Hamlet, the man beneath those masks…he has to embody that right down to his bones.

Easier said than done, of course. Who is Hamlet, if not the amalgamation of all those lines and masks? After three months of rehearsal — and 25 years of obsession, on and off — I still have to confess I have no idea. But maybe Wesley does…or else, if he doesn’t yet know the answer in his brain, maybe he’s been moving through the play long enough to start to feel it in his bones.

And so it goes, for all the actors, and all their characters. It’s greasepaint alchemy, and a leap into the unknown. It’s nothing like a modern play, where you trick yourself into believing you are Hedda Gabler or Stanley Kowalski or Ricky Roma. It’s the terror and humility that comes from accepting you never will be Hamlet, Ophelia, Claudius, or Gertrude, but then letting your breath and your bones haul you out there, like a marionette, and thrust you into the thick of it.

Life’s but a walking shadow, a poor player
Who struts and frets his hour upon the stage
And then is heard no more. It is a tale
Told by an idiot, full of sound and fury,
Signifying nothing.

One thought on “H2016: Standing at the Crossroads”