Getting to the Fortress can be difficult. The modern-day town of Louisbourg is a pleasant 40-minute drive from Sydney, although if you’re coming from the airport or the Newfoundland ferry, you’d need to add another 20 minutes of driving time. But the National Historic site – that is, the site of the original French fortress, and where the recreation has been built upon its bones – lies beyond the town itself, on the far side of the harbour. But don’t drive too far; cars get redirected to a Visitors’ Centre, conveniently located in the middle of the woods. There, they can receive an overview of the site’s history via displays, dioramas, and a few ancient cannons and anchors – but most visitors plow through this area, impatient for the real deal.

But wait! You still need to get on a bus, which will take you 1km down the harbour to a drop-off site. Unless it’s a foggy day, you can finally see the fortress proper, but it will still seem surprisingly distant, as the drop-off site is a 180-metre walk from the Dauphin Gate. Some visitors linger to investigate the nearby Desroches house, which reproduces the sort of fisherman’s huts that would have stood outside the fortress walls. Then, at long last, you approach the complicated entrance, which includes a small sortie gate, a drawbridge, and a massive pair of wooden doors beneath an imposing stone arch.

But wait! First…you’ve got to get past me. 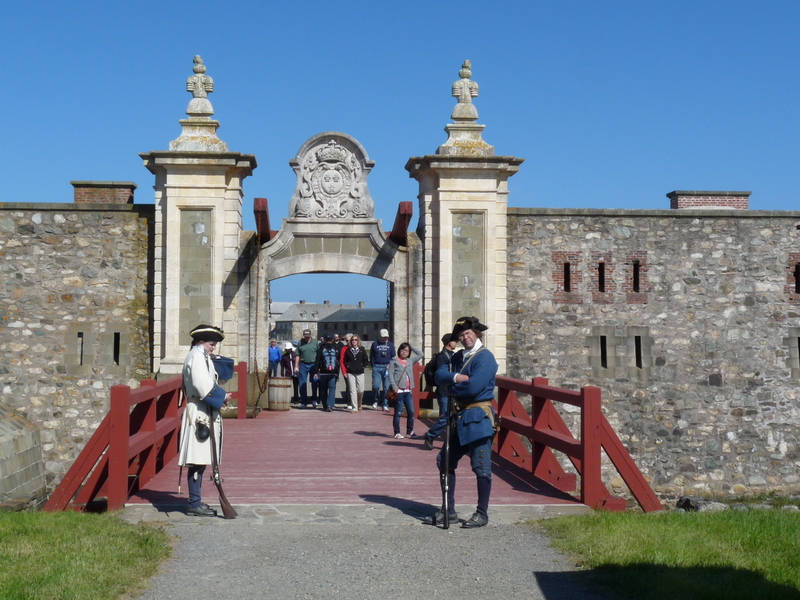 Once a week, I’m one of the guards assigned to the Dauphin Gate (“Dauphin” refers to the son of the King of France). There’s usually two of us on duty, and we take turns standing outside the sortie gate, a lone figure with a musket, visible from 180 metres away. Unless visitors stop in the fisherman’s hut, this guard is their first point of contact with the 18th century. It’s usually the first chance they get to engage with the role-acting aspect of the fortress – a facet of the experience which some visitors dread, but which others relish – maybe a bit too much.

“Don’t shoot!” Is the most common phrase I hear as they approach. But I can actually hear a lot more than that; the shape of the outer walls serve to carry their voices to me, even when they’re quite a ways away. This is helpful for a couple of reasons; first, it helps me determine if they’re willing to play the game or not, and second, it tells me whether the game should be played in English or French.

What is the game at the gate? Most of the other military re-enactors claim to be on the lookout for English spies. They greet with suspicion anyone wearing a red t-shirt, because “red is an English colour” (never mind the fact that many of our own soldiers also wear red). They insist that visitors “do not make any maps or drawings of our fortifications,” and that they “surrender all their weapons before entry.” And many visitors lap this up. Family members love to expose one another as potential spies. “Throw him in jail!” say far too many parents, offering up children who, in some cases, are too young to understand it’s all make-believe. Fearful tears are not uncommon.

But at the gate, we are also responsible for relaying some safety information, and it’s awkward to switch between ridiculous instructions like “Do not interact with any of our English prisoners” and real-world warnings like “If you climb up on the grassy walls, you might fall off and die.” With a rule like “Don’t feed the animals,” I don’t care that much if everybody understands or not, but I really do want visitors to remember that the park closes at 5pm, because it’s a huge site and it can take forever to flush out all the lingerers. I worry that they won’t take me seriously if I add on things like, “If you’re in the fortress after five, then it’s the prison for you!”

And sometimes, it doesn’t matter what I say or how I say it; these people are tired and hot. They just walked 180 metres and their maps have informed them that the restrooms are still another 300 metres away. And sometimes, the park is so busy and the buses so full that I end up feeling like the last Spartan, holding the gate against a flood of tourists. The sortie gate is an effective bottleneck, but if I’m issuing safety instructions to a crowd of over a hundred people, how many of them will be able to sift through my shtick to glean the potentially life-saving highlights?

Then, a couple of weeks back, another wrinkle: I was car-pooling with a woman who works in the civilian unit, and she confided to me that “Hardly a day goes by without somebody asking me if I’m a prostitute.” Stories also circulate of female staff posing for photos with the tourists and finding themselves squeezed or caressed without permission. Some visitors, I realized, think of Louisbourg as a watered-down Westworld – a playground where they can suspend their 21st century morality in order to say or do things that wouldn’t be allowed in daily life.

It isn’t my responsibility to fix that, or to protect my co-workers. But when I’m at the gate, I am the first point of contact, and I represent the authorities in Louisbourg. Suddenly, all that playful banter about spies seemed less important. I have since revised my script, and now I usually greet visitors with some variation of the following (the bits in parentheses are said with a deliberate wink, but the rest of it is played pretty seriously):

“We are a fortified town. That means that we, the military, are here to protect the villagers who live inside the fortress while they ply their trade (they’re mostly fishermen. You get used to the smell). That means I need you to be on your best behaviour. You may enter any building with an open door; you may interact with the villagers, ask them questions…but if I hear of any disruptions, or if anyone is disrespectful… (I’ll introduce you to my old friend, the prison).

“A couple of other rules, for your own safety: stay off the walls with the tall grass. That grass is a warning, there’s a steep drop on the other side. (If the grass is tall, you’re going to fall.) Same goes for our embrasures – you know, those holes in the walls where the cannons stick out? – Don’t climb around there, or you could fall into the harbour… (Then I have to jump in and save you, and then my uniform gets all wet…it’s just a bad day for everyone).

“Last rule, very important: our drawbridge goes up at 5pm, so we need everybody out of the park by 5 o’clock at the latest. (If you’re still inside after 5, we’ll find a place for you to spend the night…but I can guarantee if won’t be very comfortable.)”

It’s not perfect. Some visitors still tune out, or even try to walk past me (Excuse me, did you notice I’m carrying a gun?). But I’ve got the rest of the summer to keep refining the right balance of “Welcome to Louisbourg!” and “Be a responsible and decent human being.”