At Louisbourg, there’s a LOT to talk about – cod, geopolitical maneuvering, colonial exploitation of foreign resources, aboriginal-French relationships, cod, sieges, Catholicism, how to load and fire a musket, cod, class and feudalism, 18th century gender dynamics, the first and second sieges, and also cod. It’s all about the cod. In cod we trust. One topic with which I struggle is corporal punishment, which was a workaday reality for soldiers and villagers in Louisbourg. It’s not that I get squeamish when describing, say, the “wooden horse” punishment, which involves securing a victim to a sharp wooden seat and attaching weights to his legs. The problem is one of tone, not content. The wooden horse is sitting right there, in front of the guardhouse; it’s the first thing visitors see when they approach the King’s Bastion, so it’s the first thing many of them ask about. Kids like things that look like animals.

The solution I’ve gleaned from observing other interpreters is to present the facts, uncomfortable though they may be, but then maybe lighten the mood with a joke: “After twenty minutes on the horse, you’re ready to [spoken in a falsetto] sing with the choir.” I cringe inwardly when I do this, because the joke is at the expense of those who suffered. And even though those victims have been dead for centuries, I still feel as if Amnesty International drafts a letter every time I earn a laugh. 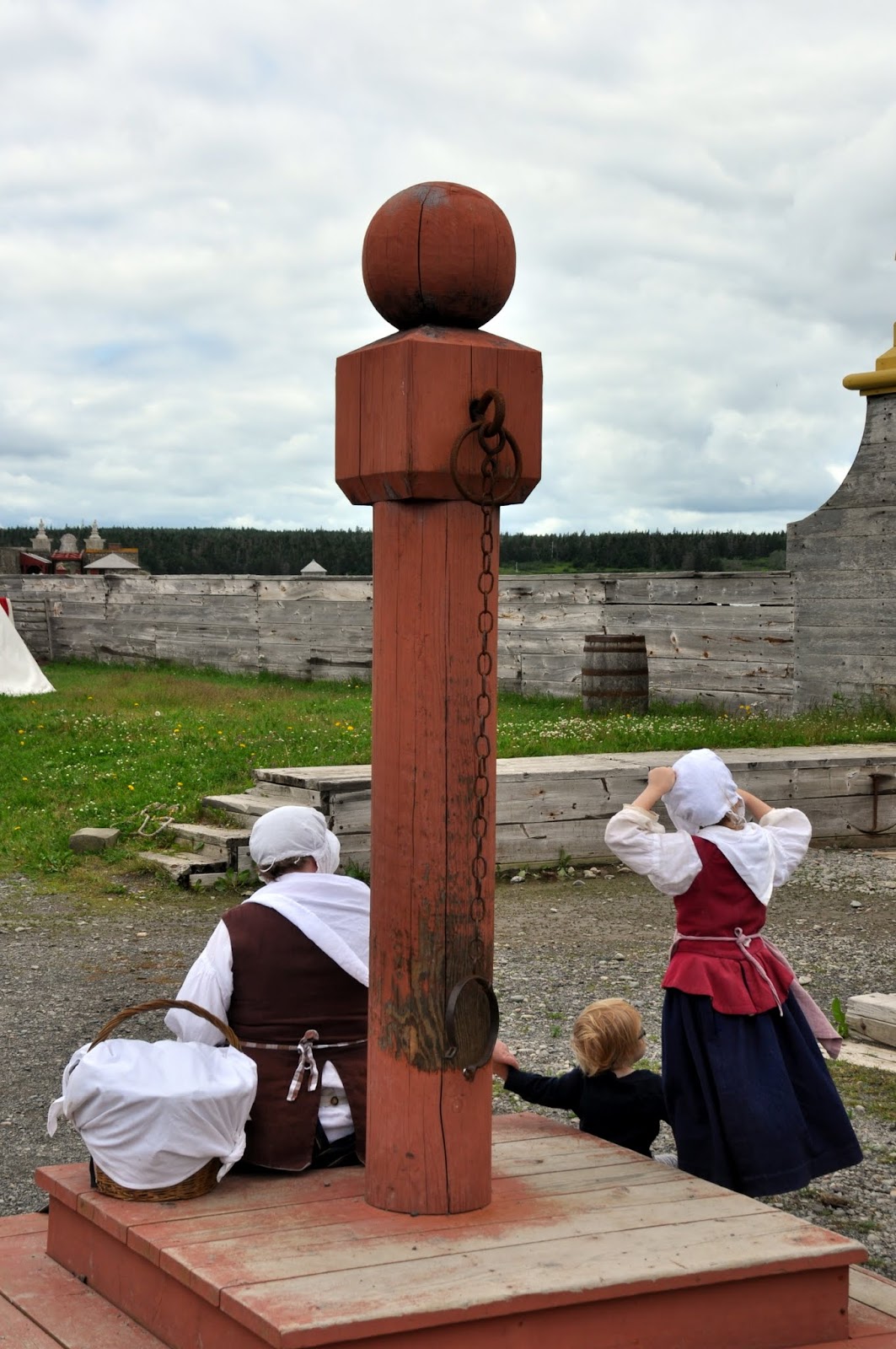 It gets weirder. The Fortress offers a number of value-added experiences, all of which are pretty cool. If you book in advance and pay a reasonable fee, you can fire a musket or even light a cannon. There’s a “rum tour” which includes samples of the Fortress Rum we make on site. And you can also be “Prisoner for the Day,” which involves getting tossed into our jail, fed bread and water, and then paraded through the streets to be locked in the carcan – the iron collar. Like the horse, this was one of 18th century’s forms of public punishment, so there’s much beating of drums and reading out of crimes, followed by jeering and booing and, occasionally, singing. It’s a spectacle.

My feelings about the light-hearted reenactment of corporal punishment become doubly irrelevant here. If somebody is paying us to mistreat them, who am I to sabotage that? Besides, maybe it’s better to put it right out there in the open, even if the results tend to incline towards parody. The alternative is probably just sweeping it under the rug of history, and then (a) nobody learns anything, (b) nobody has fun, and (c) we don’t get your money.

The first time I participated in the Prisoner programme, there was a group visiting from C3: Canada Coast to Coast. It’s a Canada 150 flagship project in which a crew pilots a Coast Guard icebreaker from Toronto to Victoria, via the Northwest Passage. The Prisoner for the Day turned out to be a member of their crew, Marie (I’m not using her real name, although the other crewmembers recorded and livecast the whole event, so it’s not like they were striving for privacy). I’m not sure if the experience taught Marie anything about 18th century corporal punishment, but personally I learned a lot about mob mentality, not to mention grace under pressure.

I picked up Marie at the info centre and escorted her to the jail. She was wearing a period chemise over her top, but her anachronistic polka-dotted tights were visible beneath. The chemise was integral to the scene: Marie had been arrested for stealing that selfsame shirt, and her sentence – two hours in the iron collar for three days – was designed to highlight how grievous the punishments could be, even for mild crimes.

The scene also teaches that punishment occurred even when the criminal has confessed and repented – at least, it’s supposed to teach that. Marie, however, was not repentant. She declaimed loudly that she was innocent, and once in her cell, she began scheming for ways to escape. Some of these were quite harmless: crying “Open the door!” to bemused passersby is actually a great way to draw attention to the scene. But making it a break for it anytime we opened the door… not so great.

See, I’m not sure whether or not the Park administrators explained this to Marie, but we can only act like real guards up to a point. I’m holding a musket, but it’s a serious safety violation to point it at anyone, even if it’s not loaded (it almost never is). And if my prisoner runs away, it’s equally dangerous to chase after them; they could trip, or I could trip, or passersby could get knocked down, etc.. So I tried to work with Marie, to change the narrative a bit: “When we walk down to the carcan, you need to stay between the two soldiers at all times.”

She was starting to calm down, but then the rest of the ship’s crew arrived to join in the scene. They had hastily scrawled signs proclaiming Marie’s innocence, and they formed a protest circle in front of the cell door, chanting and hurling abuse at the guards. Again, not inherently unsafe – although the prison opens out into a narrow thoroughfare, so a bottleneck quickly developed – but my co-workers and I exchanged nervous glances, wondering at one point a fake mob becomes a real one.

As we took Marie out of her cell, she made several grabs for our muskets, and a couple of the protesters did the same. To them, my verbal warnings may have sounded as if I were speaking in character, as a French soldier, not as a Parks employee concerned about safety. “We need a safe-word,” I thought to myself, but by then it was too late: we were outside, marching down the street, and drawing an enormous crowd – which was expected in the 18th century, when public humiliation was integral to deterrence.

Halfway down the hill, Marie saw a new bid for freedom. She reached forward to the belt of the soldier in front of her – a student employee, less than a week on the job – and pulled out a bayonet. One of the more experienced intepreters was right beside her, playing the jailor, and he spoke decisively and clearly out-of-character: “Really. No.” I think Marie knew as soon as she’d done it that she’d gone too far, and she gave up the blade, and seemed to settle down a bit from there. Once she was in the iron collar, we were more in control of the scene, and could use the furor of the crowd to better advantage. The scene’s ending tends to break right out of the established, 18th century rules (we can’t leave them in there for two hours, after all!), and this time was an especially anachronistic case, as it involved a chorus of “O Canada.”

Since then, the C3 crew has made their way to Maddox Cove in Newfoundland, and the Fortress has doubled down on safety instructions for any would-be jailbirds. Corporal punishment remains a serious problem in countries throughout the world… but at Louisbourg, you can be assured that nobody will get hurt – even if they get caught stealing a chemise, or egging on a mob.