Today is International Women’s Day. My life is blessedly suffused with smart, fierce, creative, and innovative women, many of whom love me for reasons I’ll never fully fathom. I cannot do them all justice in 1,000 words, so I’m going to focus instead on women who face a particular challenge – asserting their status as women. And, being who I am, I’m going to do it awkwardly, and using 2,000-year-old poems.

Transgender rights are new, but the people fighting for them are not. The sharp spike in cultural representation – trans individuals, characters, and stories – give the impression that they have come out of nowhere, and part of cis* resistance to the normalization of trans identity stems from this whiplash effect: “They didn’t even exist 10 years ago, and now they want their own bathrooms?” Untrue, probably on both counts.

Transgender voices have been marginalized until this century for a very simple reason: they didn’t want to get murdered. With the 21st century came the rise of the internet, which begat social media, which begat a (mostly) safe space for people with non-traditional identities to find themselves and each other. Don’t mistake: trans people still have extremely valid reasons to fear harm; it’s just that they now have the means to tell people about it.

I’m oversimplifying, of course. As the hidden history of trans identity comes to light, I expect we’ll all be wrong about a lot of things. It’s another reason that potential allies of trans rights – even liberal ones, even queer ones – shuffle their feet when the subject comes up: nobody likes to be wrong. “What if I get the pronouns mixed up?” is shorthand for “How am I supposed to know how to live in a post-binary world?” You can’t know. No one knows. Nobody knew what would befall civilization when gay marriage was legalized, either. But Canada is 12 years in, and the sky hasn’t fallen. We adapt.

I have faith that society can adapt, can I’m not naive enough to think it will be easy. Humans are hard-wired to classify and pigeonhole, and there is no us-and-themming more deeply ingrained than sexual dimorphism. It’s easy for a liberal academic to rattle off the distinction: “Sex is biological, but gender is psychological.” It’s much harder to stop mentally dividing the people around us. It should be the easiest thing in the world to call someone a woman because they tell us she’s a woman. Still, our reptilian hindbrains tilt like an old pinball machine when our eyes suggest otherwise. 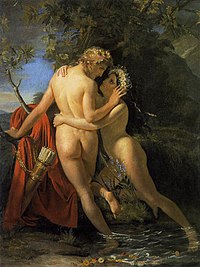 Some of the oldest stories about transgender identity come from my favourite poem, The Metamorphoses by Ovid. Being poetry, it employs metaphor and myth to explore the breakdown of traditional gender. Also, being written by a cis man 20 centuries ago, it gets shit wrong. Despite the shortcomings, Ovid illuminates several distinct ways of thinking outside the binary box. One is a story of violence and forced amalgamation; the other is a love story.

Salmacis was an unconventional nymph; unlike her sisters, who swore chastity and reveled in Diana’s hunt, Salmacis was idle and a bit boy-crazy. While gathering flowers near her favourite pool, she noticed Hermaphroditus, the son of Mercury and Venus. She fell in love with him, and wooed him aggressively. Hermaphroditus rejected her, so Salmacis pretended to leave, but hid in the bushes to watch the youth bathe. Finally, “inflamed with desire for his naked form,” she dove in and tried to ravish him – though Ovid’s language suggests drowning as much as rape:

“She held him to her, struggling, snatching kisses from the fight, putting her hands beneath him, touching his unwilling breast, overwhelming the youth from this side and that. At last, she entwines herself face to face with his beauty, like a snake, lifted by the king of birds and caught up into the air, as Hermaphroditus tries to slip away. Hanging there she twines round his head and feet and entangles his spreading wings in her coils. Or as ivy often interlaces tall tree trunks. Or as the cuttlefish holds the prey, it has surprised, underwater, wrapping its tentacles everywhere.”

But Salmacis’s triumph backfires with a boast: “Grant this, you gods, that no day comes to part me from him, or him from me.” The gods fulfilled her wish by grafting them into “a two-fold form, so that they could not be called male or female, and seemed neither or either.” Ovid presents this as a diminishing, and afterwards Hermaphroditus curses the pool: “whoever comes to these fountains as a man, let him leave them half a man.”

What a disturbing and misleading origin story for non-binary gender! There is a famous, anonymous sculpture of Hermaphroditus – I’ve seen copies in the Louvre-Lens and in Lille’s Palais des Beaux-Arts – depicting a languid, curvaceous feminine form reclining amongst sheets. Then you walk around and see the male genitalia – just as delicately sculpted, but seemingly designed to shock through contrast. Salmacis’s violence begets real-life violence; trans panic arises when cis people encounter a similar juxtaposition in a living body.

The gods’ forced union of Salmacis and Hermaphroditus could be read metaphorically upon a broader social level, too. Trans people exist, and cis people must find some way to live with them. The meeting of our minds could be like that mythical meeting of bodies – messy, scary, primordial. But I choose to subscribe to a different origin story instead.

In Phaestos, Telethusa bore a baby girl, but her confused, impoverished husband had sworn to kill any female children, so Telethusa disguised young Iphis as a boy, and raised her such. Iphis understood, and kept the secret, right up until her wedding night – for she was betrothed to marry “golden-haired Ianthe, whose dowry was her beauty.” They had grown up together; they loved each other; but Iphis feared the response of her bride when she discovered the truth.

Help came from an unexpected source. Telethusa prayed to Isis – an Egyptian goddess, oddly, and a template for the modern Goddess movement – to help them:

“Tears followed words. The goddess seemed to make the altar tremble … Not yet reassured, but gladdened by the auspicious omen, the mother left the temple. Iphis, her companion, followed, taking larger paces than before; with no whiteness left in her complexion; with additional strength, and sharper features, and shorter, less elegant hair; showing more vigour than women have. Take your gifts to the temple, Iphis: rejoice, with confidence, not fear! You, who were lately a girl, are now a boy!” Clumsy though this myth may seem today, it offers me hope that some transformations can arise through love, not violence. As the father of a trans girl, I’m not too proud to pray to Isis, that the social evolution of trans rights may occur as smoothly. When people 2,000 years in our future look back, may they forgive our binary fumblings, and our fear.

* “Cis” is academic terminology used to describe people who are not trans – that is, people whose gender identity matches the sex of their birth.