In most of my encounters with Paris, I have tried not to come across as a tourist. I’ve failed, of course; even when I try to speak French, I’m a sore thumb the moment I open my mouth. Recently, I’ve enjoyed recasting myself as a mystery tourist – too polite to be American, yet too uncouth to be British, what is this guy? – but still a tourist, still always passing through, even if it’s for ten months this time.

GB has no qualms whatsoever about being a tourist. She has declared herself a “sparkly bumpkin” during her 10 days in Europe: “sparkly” because she intends to smile at everything, and “bumpkin” because she has never been to Europe before, has barely ever been outside of Atlantic Canada, and did the minimum amount of preparation before flying here. I pick her up at the airport, and she immediately starts waving her phone around, snapping photos of everything.

I have set aside three days in Paris to show her the highlights. I am worried about her capacity to keep pace, given factors like jet lag and fibromyalgia—but she is a grownup, not like the child I’m accustomed to dragging around until long after she’s too tired to handle it. On our first day, we don’t get very far from our hotel, but I at least show her the Seine, with its string of arched stone bridges receding from Austerlitz towards Isle de la Cité. She takes a picture. “Do you see those big ‘N’s carved everywhere?” I ask, “That’s Norman, Paris’s most famous graffiti artist. He even tagged the Arc de Triomphe.”

GB sees through my BS, although the jet lag gives me a few seconds’ grace. She doesn’t fish for the correct answers to my historical posers (in this case, it’s Napoleon); in order to maintain her “bumpkin” status, she has cheerfully resolved to learn absolutely nothing on this trip. That’s a foreign attitude for me, because I love learning. But I can also remember my first few days in Lille, when GG was filling my brain to capacity with Flemish history. Luckily, in France, there are other things even more delectable than the past. I take GB to my favourite local Italian restaurant, then introduce her to pain au chocolat. She sparkles.

On Day Two, it’s my turn to not-learn, as we embark on GB’s professional quest: rocks. GB is a craft jeweler – she wraps pretty wires around pretty rocks and then sells them for a pretty penny. I know next to nothing about her work, but I helped by locating the “bead district” in Paris, plus the host at our hotel recommended an out-of-the-way wholesaler called Minérals do Brasil. GB takes some pictures of her breakfast, when we head to the Metro. 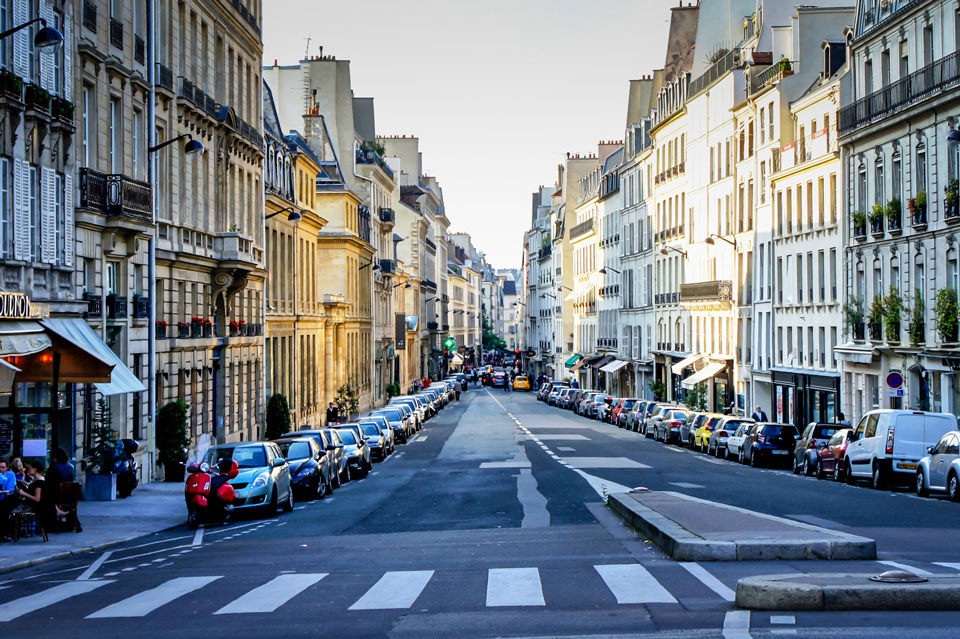 I relish the chance to hoof it around some unfamiliar neighbourhoods. At first blush, Paris is homogenous; most of its arondissements are packed with long rowhouses built from beige Plaster of Paris, street after street, boulevard after boulevard. But look closer, and you’ll spot a million distinguishing marks on every hand-carved apartment house. I love spotting faces carved into the frames of doors and windows, maybe because they inspire stories in my mind. GB gawks at the wrought-iron motifs on balconies and window railings, as their curves inspire new ways for her to decorate jewelry back home.

Despite all the goggling and waving of cell phones, we manage to get our shopping done. GB swiftly meets her spending limit of beads, stampings, and semi-precious stones. Like all tourists, we are soon labouring beneath the weight of our backpacks – except most tourists don’t literally have boxes of rocks in their bags. We try to give ourselves a break by checking out the Museum of Art and Design (an unplanned stop – if you meander through Paris long enough, you’ll bump into a museum worth visiting), but their cloakroom only accepted coats. So our rocks came along while we scoped out classic drafting boards, prototype aircraft, and the Foucault’s original pendulum.

After lunch, another Metro carries us to Minérals do Brasil: out-of-the-way indeed, we find it tucked inside a courtyard beyond a courtyard behind a pair of carriage-doors. The shop is cramped and packed to the atoms with rocks, wands, crystals, gems, and fossils. One corner is stacked with geodes, some larger than my torso. Another nook is luminous with white crystals, silently inviting me to come have my chakras aligned. I easily resist the urge to buy a custom-made showerhead filled with cleansing pebbles. After GB’s spree, we notice another shop across the courtyard, its door marked “For Professionals Only.” I inquire, but am informed they have a minimum 500 Euro spending policy. Next time, maybe.

We dump our quarry at the hotel, then limp back out to attend a choral concert at Notre Dame. So far, I am pleased at how GB experiences Paris, even with the compulsive photo-taking. But she has not yet had a truly transformational experience, and I’m hoping that Notre Dame will do the trick. Paris is full of marvels, miracles, and monuments to Normand’s glory, but Notre Dame is in a class by itself. Therefore, I am smugly satisfied as we approach the lambent towers of the cathedral and GB gasps and whips out her phone. It takes me a second to realize she is not pointing it at the church.

“Did you spot another balcony?” I ask.

“No! I caught a Mr. Mime!” She shows me her phone. My own transformational moment arrives as I realize, this whole time, GB has been playing Pokémon Go.

Don’t judge. What says “sparkly bumpkin” more than catching Pokémon in Paris? A truly garish tourist would have dropped 10 Euros to buy an Eiffel Tower keychain; my friend collects imaginary monsters and the raw materials for art. Mr. Mime (a Pokémon only available in Europe) is not real in any tangible sense, but neither is a photo, or a memory. And like the original pilgrims who flocked to Notre Dame, GB is a tourist occupying two worlds simultaneously – just, instead of the world of the spiritual, she’s chosen to keep one foot in the virtual. That’s some efficient touristing, right there.