“And I’m goin’ down the road, boys
Seeking what I’m owed, boys
And I know it must get better
If far enough I go” 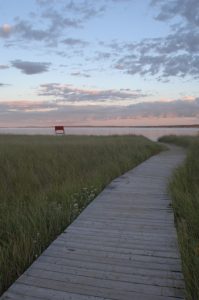 In less than two weeks, we’ll be getting on the first of so many planes, and when the lobster-claw shape of Cape Breton Island recedes behind us, it will be last time we see it for at least ten months. We don’t know exactly when we’re coming home, but the current resolve is to stick it out in France until X completes a full year of French schooling in June ‘17—or until we run out of sabbatical money, whichever comes first.

I wrote “coming home” up there without hesitation or irony. After living here for seven years, the island is unquestionably home to me, even if my concept of “home” is not as profound as that of a born-and-bred Caper. I’ve never fully understood how a place can get inside somebody’s bones. In my plays, I try to capture a sense of location, but I don’t believe I’ve ever succeeded in getting into the skin of a place, the way that I can inhabit and animate my characters. But Caper playwrights can do it—Bryden MacDonald is my favourite example, since even in his plays which are not set in Cape Breton, the characters still carry tattered threads of the place onto the stage, lifelines or umbilical cords.

I never felt that with Edmonton, where I grew up, and I’ll never feel it with Cape Breton. Honestly, the closest I’ve ever come to feeling that deep, spiritual rootedness with place was a park in Paris—so I guess I’m heading in the right direction. But I will miss things about this odd little corner of Canada, and as I reflect upon it (pre-emptive nostalgia; it’s a grown-up thing), I realize they aren’t always the things I’d expect to miss.

Before I dive into a list, though, allow me to flash back to last week, when I dragged my friend Gayle (a true Caper, not a Come-From-Away like me) to a town-hall-style forum hosted by CBC Mainstreet and Engage Nova Scotia. The topic was supposed to be “The Future of Nova Scotia,” but the 100-plus group of Capers swiftly and predictably narrowed the parameters to focus entirely on their 15% of the province. We answered polls with questions like “What is the region’s greatest resource?” and “What resources are being overlooked?” Then we jawed for two hours, as only a culture of storytellers can do.

I don’t mention this meeting simply to boast about how I was able to find all the solutions to Cape Breton’s ongoing economic crisis (although I totally did—and if you listen carefully you can hear me sound off about it here). Rather, I mention it in this context because now I know what an outlier I am. Whereas the majority of pollsters raved about the island’s natural beauty, I have to confess (now, as I prepare to make my exit) that Cape Breton’s natural beauty has never really done that much for me.

Sure, the Cabot Trail features hills and oceans, and maybe if I weren’t always the one behind the wheel, I’d be able to appreciate it more, instead of studying the pitted, hairpin two-lane highway to avoid plowing into moose and/or motorcycles. And I occasionally like hiking, or walking the Baille Ard trails in Sydney. But jellyfish-ridden beaches? Icy Atlantic riptides? Getting lost in foggy, soggy forests? I can handle a break.

Here’s the first of a few things I probably will miss while I’m goin’ down the road. I’ll post a few more in the next week or two, before I actually bid the island farewell:

Freaks and geeks. There are weirdoes everywhere in Canada, I’m sure. But there’s something about Cape Breton’s post-industrial and supposedly homogenous Gaelic-Scottish culture that makes it particularly thrilling when people break the mold. This is a place where tradition is revered with one breath and cursed with the next, and it’s tough to be ostentatiously unique with that kind of psychological push-and-pull in your blood, which makes me even prouder when I see Capers marching to the beat of their own bodhrán.

In the 7 years I’ve been here, I’ve watched Sydney’s Local NPC comics & games shop hop through four different locations, but they’re thriving, and they offer a great sanctuary where antisocial geeks can be social in their own geeky way. I have never had a problem gathering gamers for Pathfinder—in fact, back in the pre-parental Golden Age, I had two, sometimes three groups running at once. And last year’s inaugural Caper Con was a blast, and impressively fan-run from start to finish. I wish I hadn’t volunteered to run games for them, so I could have attended more panels and events—and it’s the highest form of compliment from me, when I say I’d prefer something to role-playing.

The other field of freakery upon whose outskirts I’ve stood (very occasionally stepping into said skirts) is the LGBTQ+ community. I can only imagine how tough it must have been growing up queer in 80s or 90s Cape Breton, whose island mentality keeps it 20 years out of date, culturally speaking. But watching the proliferation of pride events, gay-friendly businesses, and Gay-Straight Alliances in schools, I’m inspired by the extent to which Cape Breton has embraced and embodied the gay motto, “It gets better.”

In 2012, I produced a staged reading of The Laramie Project in response to the murder of Haligonian gay activist Raymond Taavel. This spring, Enter Left Productions mounted a full production of the same play; it closed less than 24 hours before the Orlando massacre. Sometimes it feels like one step forward, two steps back. But I’ve got a nonconforming kid to raise, and when I read about a tragedy like Orlando, I’m surprised to realize that 21st century Cape Breton seems like a pretty safe place to raise him.

What communities in your hometown are you most impressed with? Who would you miss most if you were leaving for a year?

One thought on “Transforming the Rear-View Mirror”