When I was young, the French called their libraries bibliothèques. Now the word is médiathèque, which I find a clever bit of rebranding, even if the physical buildings are still mostly stocked with books. But recently I learned about another, even cleverer, French riff on the traditional library. Alongside some of their médiathèques, they also have ludothèques – game libraries.

P and I tried out a ludothèque this week, and I left kicking myself for not going months before. It’s perfect for her at this stage, when she’s only content if she’s immersed in some game or other. The space was stacked to the rafters with boxes, organized first by age range, then number of players, then duration of play. You can play them at tables right there during the somewhat limited hours in which the ludothèque is open; then, if you like some of the games, you can borrow them for a week. There’s a monthly fee, which I assume goes mostly towards replacing tokens, Scrabble tiles, and dice. It’s nice.

P’s game frenzy is less nice. Far be it from me to begrudge a five-year-old her playtime; I just fear I may have set her on the wrong path. She loves games dearly, but the way she loves them, and the kinds of games she loves, could leave her starved for playmates for a long time. Right now, while she still has her parents’ undivided attention, she doesn’t mind. But I can’t play her games forever – in fact, I’m ready to forfeit any day now.

As I said, I have only myself to blame. Bear in mind that P’s Dad actually, occasionally writes games for a living. How cool is that? Unfortunately, the game I write for comes with a 500-page rulebook; and, although we’ve had some recent success indoctrinating her into D&D, it’s probably just going to make the problem worse, not better.

In role-playing game design, there are two broad categories of gaming experience: sandbox and railroad. A sandbox adventure gives players a richly detailed, open-ended world to explore, only limiting their choices gradually in response to their own actions. A railroad game offers players a plot, and expects them to follow it lockstep; unconventional choices are discouraged because they fall outside the parameters of design. Stereotypical “rescue the princess” quests would be railroad games, whereas “tame the vast wilderness and earn fame and fortune” is more sandboxy. “Railroad” is sometimes used pejoratively, but players have varying tastes.

The terms also apply to video games, which P and I enjoy playing together in limited doses. Most of our favourites – your Legend of Zeldas, your Super Mario Galaxys – are sandbox games, as open-ended as a video game can get. 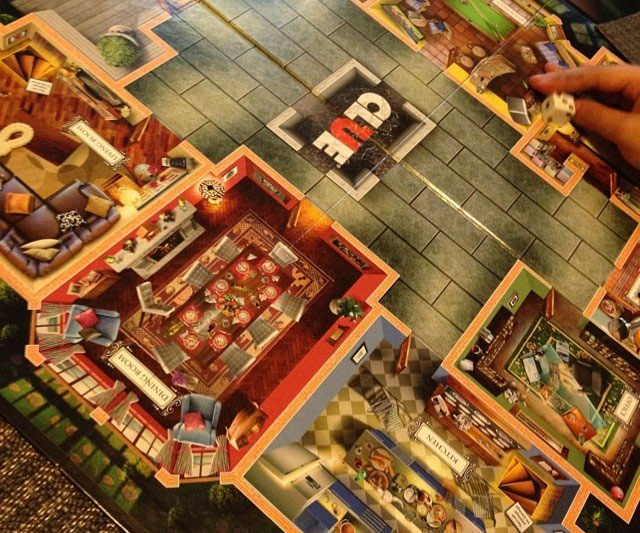 It’s harder to apply the terms to board games, because the rules close in around you, demanding that you accept a common goal and a fixed set of tactics. A handful of games could arguably be considered sandbox, by virtue of your movements around the board: Risk, Clue, and some modern resource-trading games like Settlers of Catan. But even those games have singular objectives. A Risk player can’t not strive for world domination; a Clue player doesn’t have the option of confessing to the crime and embarking on a killing spree. And, no matter how hard I’ve tried to make it so, Settlers of Catan will never let you start a side economy based on sheep dung.

Kids’ board games are almost always railroads. In Candyland and Snakes & Ladders, the only way through is up. The two games we tried at the ludothèque were railroads because I insisted on choosing vaguely age-appropriate games (one was a culturally insensitive card game called Tiki Topple, the other a dragon-wrangling game called Mount Drago). P tolerated them, but showed no interest in borrowing them. Having played them once from Point A to Point B, she sees no need to revisit them. She is a sandboxer.

At home, this means adapting and combining straightforward kids’ games into sprawling monsters. I bought P a game called Labyrinth; we played it once according to the rules. Now she uses the tiles, spread across her corner of the living room floor, as warp zones for characters to explore new worlds, Mario 64-style. Since Labyrinth doesn’t come with tokens, she’s borrowed some numbered markers from a 3D multiplication grid game. Then she uses normal playing cards as walls and pits, while Pokémon cards represent enemies. Recently, the appearance of one Pokémon actually triggers an entirely separate, arena-style battle game up on a nearby table. The rules are forever evolving, the goals forever just out of reach.

It’s a lot of fun for her, but it’s inscrutable to anyone else. Paradoxically, she understands that games involve 2 or more players, so she’s constantly trying to rope us into playing her sandbox mishmash – a process that, for us, mostly involves a lot of nodding, smiling, and surreptitiously checking our tablets. Travel has likewise been annexed by gameplay – right now, the five words I dread the most are “let’s play as we go.” Lille is teeming with invisible goblins and secret passages; only very rarely does the game incorporate anything from our marvellous surroundings.

I admire her imaginative tenacity, and I know it’s a reflection of my own outlook (if you ever see my eyes go glassy, I’m probably thinking about role-playing games). I also know it’s difficult to go back to Candyland when you’ve had a taste of the hard drugs. My fear, as always, is that even though all the world’s a ludothèque to her, the other children of the world are merely gnats, distracting her from her grand design, when they could be collaborators. But then, maybe part of the problem right now is that all the instructions are printed in French – and all the kids come that way too. When I get home to Canada, I’ll open up a ludothèque and let my daughter in on two conditions – play with others, play by the rules.