Jevon tells a story (third-hand, though most of his greatest hits are autobiographical) about a young woman visiting Japan for the first time. Upon disembarking, she had a mighty need, so she sprinted to the airport bathroom and relieved herself so fast, she didn’t notice until after she stood up again that this was no “ordinary” (ie. North American) toilet. Instead of a conspicuous flushing handle, there was a plastic arm covered with buttons, all labelled in Japanese, of course. There were some cryptic icons, but none of them connoted “flush,” so she began to push every button in sight. The toiled spurted and sprayed and gurgled, the seat got warm, then cool, but nothing produced the desired effect. When she finally spotted a round blue button on the wall of the stall, she thumped it with relief…only to hear the excited voices of two security guards and a paramedic, calling from outside. She left the airport knowing the Japanese symbol for “help,” but not much wiser in the ways of Oriental crappers.

I have no particular love for bathroom humour (as subjects go, it’s neither my Number One nor Number Two), but I’ve always been intrigued by the sociology of the lavatory. When I was a boy, I was fascinated by the etiquette of spacing at urinals—don’t stand too close, but don’t leave too much space in between. These days, bathrooms are a flashpoint for debates about gender identity and trans* individuals’ rights—and while I don’t intend to get into that here (although OBVIOUSLY everyone should be able to pee free from persecution), I do think part of the problem is our cultural intransigence surrounding all things excretory. We have been relieving ourselves in rigidly prescribed cultural ways for such a long time, it has become almost impossible to imagine other models.

That’s where Japan can help. Did you know that, if the gal in Jevon’s story had been born a guy (or discovered that she was one), and if he’d gone running into the men’s room at Osaka airport or wherever, there’s a good chance he’d have found himself face to face with a female custodian? It’s true! Some posh places even have lavatory attendants on staff, to hand out towels, and they are invariably female, too. You don’t need to tip them, by the way, but you do need to accept the mind-bending non-Western notion that a stranger with a different gender might occasionally spot your junk.

Another ideological nut to crack, for men and women and everyone in between, is the dreaded Eastern toilet. Not to be confused with the button-riddled Japanese sit-down toilet, the Eastern toilet is usually a single stall, tucked into the shadows of some public restrooms, which consists of a porcelain depression in the floor…and that’s it. Modern models have a flush function, but the stark simplicity of it can strike the Western user as a bit…primitive. Never mind that, 100 years ago, most rural Canadians were still using outhouses. This sort of thing only takes a generation for cultural erasure to take place; one generation of sitting instead of squatting, or flushing instead of scooping, and all the older models become inconceivable. That’s probably  commonplace with technologies of all kinds—take away a millennial’s cell phone, and they’ll call you a barbarian, among other things—but what makes toilets a peculiar case is our haste to recoil in disgust from any prior versions.

It’s partly a question of hygiene, of course—but then, any toilet, Eastern or Western or Martian, can get gross if left unattended. Besides, it’s mostly a matter of how you wash up, not how you crap. And this is where we must be vigilant against hypocrisy and prejudice. If a Westerner assumes that a foreign washroom is dirty by default, it’s either because they believe that foreigners are more neglectful of hygiene, or else they’re assuming that foreigners are inherently dirty, which is an especially damning bit of bigotry coming from a culture where 1 in 5 people don’t bother to wash up after they whizz. 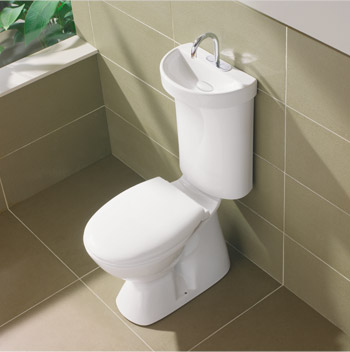 Prejudice can cut both ways. It’s entirely possible that a Japanese visitor might write us off as philistines because our washrooms don’t offer East-West options, or lack the peripheral buttons to help you wash your backside or your ladybits. Some Japanese home models have another brilliant feature: the raised back of the tank doubles as a sink, so that after you flush, the new water can be used to wash your hands before replenishing the tank. A Japanese tourist, accustomed to this level of efficiency, would be within their rights to accuse our toilets of shameful waste (and not the kind of waste you expect to find in there). I get even more chagrined when I think about how much resistance a hand-washing toilet would face in our culture, simply because toilets equal eww.

But I get it. A trip to the loo is intimate, whether you’re sitting, standing, or squatting. Whatever your anatomy, there’s a moment of vulnerability when your plumbing cozies up to its plumbing. And bringing cultural ignorance into the mix can make that feeling much, much worse. After all, how many of us, as children, were chastised because of potty-training, or mercilessly teased about some accident or other? And all that childhood shame floods back when we’re confronted with a new lavatory learning curve. It’s a minefield, and it’s enough to make some folks stay at home, or at least plan their vacations around the assurance that their tush will never have to bump against an unfamiliar bowl.

But then, what better way to learn about ourselves, than to defamiliarize the things we take for granted every single day? To paraphrase Nietzsche: if you gaze long into a porcelain hole, the porcelain hole also gazes into you.