I knew I’d have to write a post about how the French celebrate Christmas, but my friend Una beat me to it. Una is also an ex-pat, having grown up in Scotland, but she has lived in France longer, and plans to stick around. She has spent several holiday seasons with her partner’s French family, so she can speak to the subject with greater insight than I.

As you might suspect, the takeaway is food. In France, any deviation from the norm is an excuse to indulge one’s palate. Una says the centrepiece is not turkey but foie gras, a fact confirmed by my other local friend Thibaut. It is, he says, a tricky dish to prepare, and his mother agonizes annually over getting it right – which means Thibaut and the rest of the family had darn well better appreciate it. You know how it goes.

(Thibaut also mentioned oysters as a traditional holiday food – so much so that Christmas Eve emergency rooms are frequently filled up with tipsy chefs sporting hand injuries from shelling accidents.)

As Una’s article implies, foie gras is controversial outside of France, since its preparation involves force-feeding ducks or geese to make their livers swell up. It’s called gavage; according to Wikipedia, a duck gets force-fed corn through a tube “twice a day for 12.5 days,” whereas a goose gets gourmandized “three times a day for around 17 days.” Trust the French to reduce animal cruelty to a mathematical science.

Yet most of the French find nothing in the origins of foie gras to dampen their holiday cheer. Maybe it’s because foie gras “belongs to the protected cultural and gastronomic heritage of France,” a legal protection with implied ethical leverage. Or maybe it has something to do with the 25,000 tonnes of annually exported foie gras, with a retail value around $65 a pound. Even if a few environmental weirdoes complain, it’s still a holly jolly Christmas for thousands of French farmers.

Anyway, I find it hard to begrudge the French their own holiday traditions when ours are so obnoxious. In Canada, you can’t set foot in a store between November and New Years’ without suffering a sensory assault of auto-tuned carols, inflatable reindeer, and seizure-inducing LED displays. Most of these commercialized blasphemies are absent in France, and while they are fond of outdoor light displays, these tend to be tasteful, neutrally winter-themed designs, and are never, ever synchronized to “Santa Baby.”

Speaking of Santa, he’s definitely a thing here. He uses the nom de guerre of Père Nöel, and although he looks substantially the same as the Coca-Cola archetype, his image is far less ubiquitous. More like the Jewish god than the Christian one, Père Nöel prefers to stay behind the scenes, relying upon children’s faith to see them through to Christmas morning instead of pushing himself upon them in every mall and shop window. Paradoxically, more people casually wear Santa hats in France – I think city workers may actually be obliged to – which could lead French children eagerly awaiting not a fur-clad, snow-bearded jolly old elf, but rather a ripe-smelling garbage collector in a yellow safety vest. There is another holiday figure, a phantom doppelganger lurking spectrally behind Père Nöel, spoken of only in whispers. No, it’s not Krampus – that Jungian child-devouring goat-demon tends to stalk the more Eastern European countries. I’m referring to Saint Nicholas, a figure whom Canadians don’t distinguish from Santa Claus at all. The secularization of Santa occurred in the Low Countries, where Sinterklaas took root with his stern, methodical charity and his casual racism-by-association. But France appears to have skipped all the Sinterklaas business, resulting in a schism between the secular Père Nöel and the Catholic Saint Nick.

But since the Revolution, France has been a nominally non-religious country, so even though every other street is still named after a saint – and even though sweet shops in Lille sell seasonal chocolates named (and shaped like) Jésus – the powers that be are cautious to keep any whiff of Catholicism out of their policies. As a result, Saint Nicholas is even less visible than Père Nöel in the lead-up to Christmas, although every now and then I get a hint of his presence.

For example, when S and I attended a meeting for a parent-run school support group, we heard much debate about what the organization’s pre-Christmas celebration ought to include. “There will be treats for the children,” said one parent, stating the obvious, “And Père Nöel will visit. But what else?” Another parent then had the audacity to suggest that Saint Nicholas also make an appearance. At the time, I didn’t know there was a difference, but now I better understand the cold stares of the other parents, and the cruel swiftness with which they changed the subject. The suggestion was akin to a mall administrator recommending that the annual Santa Station be flanked with a Nativity and a Crucifixion. And while you’re at it, why not toss in a Krampus? 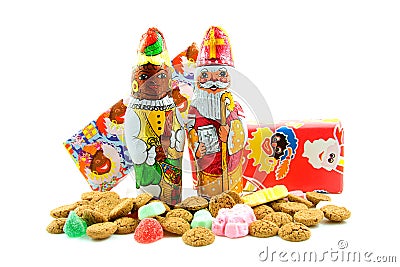 We didn’t end up going to that end-of-year party, opting instead to take a daytrip to Belgium, where chocolate Sinterklaases were flying off the shelves, along with Black Peters available in milk or dark (not white) chocolate. I wonder what else they decided to do with the French five-year-olds that day. It must be challenging to find activities that fall into the civilized valley between crass commercialism and religious piety. Maybe they taught the kids where foie gras comes from. Joyeux Nöel!