Peaks and Valleys, Part 1 of 3

It’s hard as hell to write about Nepal. I’ve been there twice now — first for 10 days in 2011, and now for a week this spring — and even after taking copious notes, I don’t know where to begin. One reason for this is my mother, who has with Nepal what Facebook would call a complicated relationship. She fell in love with it ten years ago, and spends as much as a third of each year there, doing charity work and enjoying a large adoptive family. But she was also there during the devastating earthquake of 2015, so the love and compassion now comes with a side dish of PTSD, some of which has spilled over into my trough of travel anxiety. But another problem involves context. How much do you know about Nepal? It’s not just a matter of finding it on the globe (it’s a tiny, landlocked sliver lodged between India and China, or Tibet if you’re using a socially conscious map). It’s not enough to know what they’re most famous for (the more accessible half of Mount Everest), or what language they speak (there’s 123 of them), or the number of times they’ve been invaded or colonized (zero). To begin writing about Nepal, I need to know if my readers have ever set foot in a developing country, or if they’ve ever been east of Istanbul. If you have, then you might begin to understand the cyclone choreography of faiths, castes, factions, lives, and livestock that keep Nepal humming. If you haven’t…

It may be one of the oldest countries on Earth — certainly the oldest in the Indian subcontinent. Its 26 million people live in an area about the size of Newfoundland, with 1 million in the capital of Kathmandu. It’s also the highest country in the world, boasting not only Everest but also seven more of the 10 highest mountains in the world. Yet Kathmandu is in a deep, dusty valley, a world apart from the tiered rice-paddy hills, the yak- and sherpa-peppered crags, and the lifeless summits that surround it. It is not currently one of the poorest countries in the world — current estimates put another 39 countries below it — but the disparity between Nepal’s average quality of life and, say, Canada’s, is staggering. And that was before the earthquake — nearly 9,000 killed, and 3.5 million homeless.

The ‘quake also destroyed many heritage sites, including Kasthamandap, the 1,300-year-old shrine that gave Kathmandu its name. The ancient wooden buildings didn’t stand a chance, but the real problem was the city’s innumerable clay-brick structures, which crumbled into a toxic dust that added itself to the extant smog of car exhaust, burning trash, brickwork chimneys and funeral pyres. Upon arrival, immediately after Namastes and hugs, my “brother” Raju hands me a buff, to protect my breathing on the long ride from the airport.

Like any big city, Kathmandu is in perpetual motion, but its energy is anarchic, careening around itself in tight daredevil loops like the helmet-less motorcyclists that plunge between unmarked lanes on every tight anfractuous street. There are no street lights or traffic signs in this metropolis. Jaywalking is unthinkable, because there are no crosswalks. The only event that brings the snarl of traffic to a halt is when a sacred cow wanders out into the road.

“Why do they stand in the middle of the street?” I ask.

“Maybe, in past life, they were traffic control,” Jokes Raju.

Kathmandu has more motorbikes than cars, but far more citizens than both. Families double, triple, or quadruple up on bikes, or else squeeze onto strangers’ laps in microbuses. But mostly they walk — a pedestrian deluge of merchants with fruit carts, urchins on errands, street dogs, monks in saffron robes, and old men balancing pots or crates or whole store inventories on their heads. At night, the hawking cries of vendors will subside, but the feral dogs will lend their voices to a symphony of territorial transactions. The city never sleeps.

As we drive, Raju points out some of the low-lying neighbourhoods hit hardest by the ‘quake. It has been two years; the lots are mostly cleared of rubble now, and some contain stacks of fresh red bricks, but few show much sign of reconstruction. Either the landlords can’t afford to rebuild, or else they continue to charge their tenants the same amount of rent to squat in the wreckage. They hunker down in huts made of corrugated metal sheeting, the roofs weighed down by spare bricks, tires, and debris. The heat inside a shanty like that? In a tropical climate like Nepal’s? Unimaginable.

But I saw such shacks on my first visit, four years before the ‘quake. Kathmandu has entire neighbourhoods of them, mostly clinging to the nearly-desiccated riverbeds. The water there is free but grotesquely polluted. I also remember countless half-finished houses, with their thick patches of rebar stretching heavenward, praying for closure. Earthquake or no earthquake, Kathmandu is a city perpetually half-rising, half-collapsed. 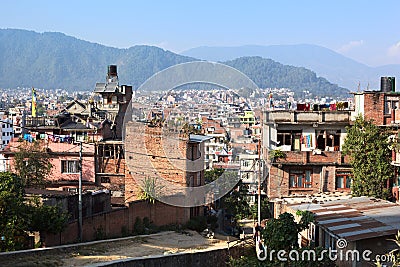 Raju’s house, thin and tall like most urban homes, withstood the ‘quake, and stands as a welcome oasis for Western visitors like myself. It has electricity (except after monsoons or during rolling brownouts), running water (not drinkable unless you’ve developed a lifelong resistance to the local bacteria), and a toilet that’s more than a hole in the ground. Raju rents the ground floor to another family — three of them at first, but the estimate is now seven — so we quietly shed our shoes and head up the concrete steps, past the metal gate on floor two, and up to the brand-new kitchen on the third floor, where we toast our return to Nepal by drinking — what else? — Everest beer.