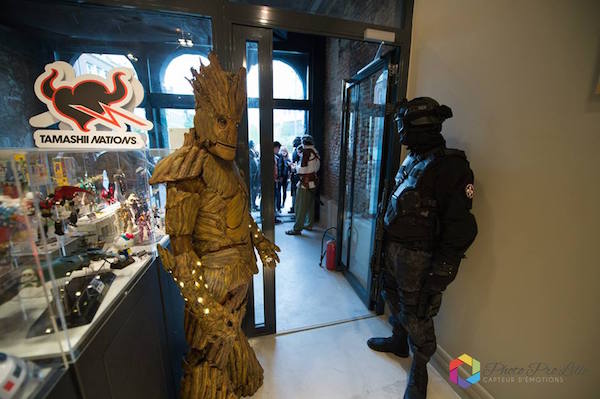 In Lille, we have The Last Bar Before the End of the World – undoubtedly a play on Douglas Adams’s The Restaurant at the End of the Universe, because everything about it screams “esoteric geek,” from the glassed-in collection of animé figurines to the cocktail names (“Sith,” “Triforce,” and of course “Pangalactic Gargleblaster”) to the washrooms, which are inside a TARDIS. It was inevitable that T. and I should meet here for a drink; we are friends and fellow dads, but above all we are comrades in geekdom.

I have already told our origin story here – how he overheard me asking a games shop proprietor for help finding a role-playing group. It’s remarkable that we’ve kept in touch, especially since T. is a single parent working two jobs. It’s more predictable that it has taken us four months to start opening up to each other. We are guys, after all; plus, as geeks, we still carry the baggage of social awkwardness within us. It is easier to escape into role-playing than it is to be honest with each other, or ourselves.

“Are you planning to see Logan?” I ask as he brings his tripel and duck sausage to the table.

“Pfft,” He waves away my suggestion, “The X-Men movies, they are nothing like the comics. They ignore all the best ones, like Colossus and Kitty Pryde.”

We discovered our mutual love of X-Men when T. described one of his all-time favourite D&D characters as having been modeled after Kitty Pryde (a stealthy wizard with a pseudodragon familiar). That’s, like, exponential geekery. Yet it’s no surprise that he dislikes the films, as he has already poo-pooed the new Star Wars franchise with the sort of disdain that only a French geek could muster.

“They are not fun,” He says, “And they are not for kids. I would never take N. to see Rogue One. He talks about death enough already.”

N. is T.’s son, a calm, reflective child – practically the opposite of my flashy spazzbucket daughter. As the bar’s TV screens play trailers for Mass Effect: Andromeda, I try to reassure T. that his four-year-old’s interest in mortality is normal. “My kid still talks about our old dog, and she always takes care to clarify that ‘she is just bones now.’”

T. is not so quick to laugh it off. “N. is mostly asking about the future: when will I die, what will happen to him after I am dead. He is always too worried.”

I nod and sip my blond. This is how guys open up to each other – first, by disclosing the feelings of others, only very indirectly touching on our own emotions. When this elliptical process starts, you need to listen and endure the awkwardness; for men, it’s frustratingly hard to resist the urge to jump in and try to fix things.

Gradually, it comes to light that T.’s father passed away recently, around the same time his marriage fell apart. “Now he is always sort of there,” He says, “But I can’t talk to him. We did not talk when he was alive anyway. He was very strict.”

“Do you feel like you’re the opposite – the way you parent?” I ask.

“Or Cable,” I agree, grimacing. This is the crux of adulthood. You’re old enough to see clearly the ways in which you are becoming your parents, yet too old to course-correct.

“I used to believe that childhood was this time of perfect innocence,” I say, “Like all kids are these little Buddhas living in the eternal Now. But maybe they’re all just as worried about the future as we are. Like, we watch them and stress about how badly we’re screwing them up, and meanwhile they watch us and worry about what happens when we die.”

It’s a bleak enough thought to throw us both into sour silence. I try to turn things around by doing the other thing that’s inexplicably so difficult for guys: encouragement. “I’ve seen you with N. You’re good to him. It’s clear he loves you.” I point out how meaningful it is that N. doesn’t call T. “papa” like all other French kids, but instead chooses to address him by his first name.

As teenage geeks growing up before the internet, we sought desperately for like-minded nerds. All we ever wanted were friends who shared our cryptic interests. Now, we have kids with mouldable minds, and the urge is strong to indoctrinate them into sci-fi and fantasy and role-playing and comic books, and pretend things like sports don’t exist. But then, when our parent-child dynamic starts to feel like friendship, we flinch. What do we want? What is parenthood supposed to feel like?

I excuse myself to use the TARDIS. When I get back, we dispel the gloom by reminiscing about our favourite X-Men storylines. T. cites “the Mutant Massacre” – an absolute classic. “That is what the movies should be,” He says, “Desperate and brutal, you know? No happy endings.”

Only a true fan of comic books would describe comic books that way. But I wonder if that’s somehow what we set ourselves up for in life, too. We want to be happy, of course, but we also want to be mutants – unique, gifted, destined for superheroics – a genetic validation of the pariah status we’ve always felt. In X-Men terms, being a mutant means you are a more evolved human – homo superior – yet it spells ostracism and loneliness and loss. I fear that as fathers, we are forever at risk of creating this legacy for our kids. We love them, on some level we want their friendship and approval, but we’re damned if we ever say so out loud.

T. and I leave The Last Bar before the world ends. Later, he emails me to thank me for my encouraging words – “They meant a lot.” Such simple things, so hard to say. There is no mutant in the Marvel Universe called Empathy Man.