One of my childhood haunts was Edmonton’s Woodcroft Library, a bright, open A-frame building with a mezzanine full of kids’ books and cushions. I liked how the chapter books had icons suggesting their genres – skull for horror, spyglass for mystery, atom for sci-fi. The spines of the adults’ books were less evocative, yet somehow I stumbled across one marvellous book there: An Atlas of Fantasy by J.B.Post. Ever since, I have equated maps with magic.

It can be enthralling to pick a spot on a map and trace out a journey. You can follow the roads as one might in real life, or you can strike out along rivers, canyons, up and down mountains, or into deep forests or seas. It’s equally nifty to step back and survey the big picture: coastlines and mountain ranges, the topography of continents, even the implication of vast, slow shifts beneath the crust. Looking at a map of Earth, even a child can see how South America and Africa once fit like puzzle pieces. Good fantasy maps offer the same degree of insight, capturing more than a snapshot of “now,” but offering hints of the shape of ages past.

Tolkein’s Middle Earth, which appeared in the Atlas, is the quintessential case of a fantasy map that offers an evocative present – placenames like Mirkwood, the Misty Mountains, and Mount Doom – together with rich hints of long-fallen empires. Even the name, “Middle Earth,” implies that much has come before. Curiously, Tolkein’s map also has a geographical “middling” effect: its western third is nearly all boring ocean, placing all the exciting details in the centre. Then, in the far east, one finds the foreboding land of Mordor, with its blocky, geometrical mountain range. Mordor constrasts with the middle of Middle Earth because it doesn’t seem natural. It’s a bit like ancient maps with “Here Be Dragons” written on the edges – there’s something so disquieting about a region that belies geographical logic, you’d just as soon ignore it – unless you’re a Hobbit. 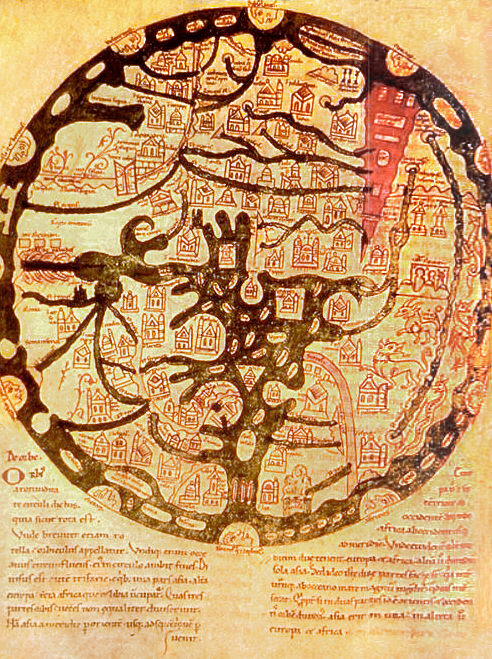 At Paris’s Institute du Monde Arabe, I visited an exhibition on ocean travel in the Middle East, and I saw reproductions of some of the earliest world maps. They were gorgeous attempts to summarize humanity’s understanding of our world within a single image – to banish all dragons from sight, as it were. The cartographers knew the Earth was round, however they knew nothing of its other hemisphere, nor the poles. The results are familiar, but essentially fantastical from a modern standpoint. In fact, I adapted a similar Medieval map when creating my own fantasy setting, the flat planet of Allu.

My office in Sydney is decorated with fantasy maps – not only Middle Earth but also Greyhawk (from Advanced Dungeons & Dragons), Golarion (from Pathfinder RPG) and Westeros (from A Song of Ice and Fire). When my child first took notice of them, I would enthusiastically read out the names of cities, forests, seas. It slowly dawned on me that I should clarify their unreality; they were so much more absorbing and detailed than her own atlas, they risked supplanting real maps altogether. This trend continued when she became absorbed in richly realized video game worlds like Hyrule (from Legend of Zelda), and before long, she was adapting them into her own versions, crafting maps just like her dad. I suppose a year’s worth of traipsing around Europe in real life is one way to compensate.

Eventually, fate steered our ship to a British Library exhibition on maps. S found it, and I went along without any particular agenda. I suppose I was expecting more of what I’d seen in Paris: visual representations showcasing the evolution of our bird’s-eye-view of ourselves. I also thought they might help to ground P’s real-world cartography, especially since she recently shifted interests towards Pokémon, a franchise without much investment in maps.

Turned out the exhibition was Maps and the 20th Century, and its central concept (“Mapping War” and “Mapping Peace”), though clever, went well over P’s head. I stumbled upon a few surprises, however, most of which only served to reaffirm my love for the unreal. Among these was a brightly illustrated map of Disneyland, a copy of which I owned and pored over so lovingly that its laminated surface wore down. But nothing can compare with the delight of seeing Middle Earth again, this time sketched by Tolkein’s own hand. It’s on the same kind of graph paper I use to make D&D maps.

What is the value of escapism? Half the maps in that exhibit were plans for war: labyrinthine trenches around Ypres, aerial targeting maps from the Blitz, sketches of Auschwitz produced by memory from escaped prisoners. Those documents are saturated with meaning, and their emotional and human value stacks with the historical, far outstripping some pencil sketch of Mordor in every conceivable way. Except…arguably, tentatively…Auschwitz is Mordor. The dark, coldly geometric shape on the periphery of meaning – the unsettling contours of a map that leads so deeply into darkness that we wish it were fantasy. Even though we can now create perfect composite satellite photos of the Earth, there are still dragons. They come from within us, and even as we struggle to map peace, they are changing the map, slowly but surely.

After visiting the British Library (how far I’ve journeyed from the Woodcroft!), we faced a rainy London afternoon with no plans. I bought tickets for a hop-on, hop-off bus tour, and GB loaned P her cell phone so she could play Pokémon Go as we went. We spent hours, sitting together in silence – I, scrupulously studying the provided map of London, overlaying my scraps of historical knowledge upon the rainy-windowed vistas; and P, following an imaginary avatar through a neon map of the same city, swiping Pokéstops that bore images of the same London landmarks I hunted in real life. My reality, her fantasy; two sides of the same globe.