I’ve been reading Ronald Wright’s A Short History of Progress, which he delivered at the 2004 Massey Lectures. It’s a thoughtful, often chilling account of civilizations’ tendencies to fall into catastrophic “progress traps” – paths and patterns that seem beneficial for everyone, but which collapse in on their own weight, decimating or even eradicating cultures who mistake progress for destiny. I’ll have more to say about the book once I’m done reading it; for now, I want to talk about Jericho and neighbours.

Wright sees history through a longer lens than most of us can conceive. He points out repeatedly (and with more precision than I’m bothering to quote) that “civilized” human history – the kind with settled agrarian communities, domesticated livestock, and something more than a bonfire to stave off the cold – comprises a mere sliver of our species’s actual span. Before the 3,000-or-so years of civilization, there were unimaginable stretches of time in which nothing ever really changed – or else change came so glacially that no one likely even thought about “progress” as a possibility. The concepts we grapple with daily – government, education, law, technology, philosophy, morality, legacy – have only been accessible for about 70 generations. They are all new.

Jericho, a city in the West Bank, is not new, even by the standards of civilization. Humans settled and built on its site 11,000 years ago – that’s about 6,000 years before the invention of writing. Even earlier, Neolithic hunter-gatherers left their stone tools behind as they migrated north or south, seeking refuge from advancing or retreating Ice Ages. Nor was it merely our ancestors who valued the region which came to be known as the “Fertile Crescent” (though not so fertile anymore, thanks to one of Wright’s “progress traps”). Cro-Magnons, the confirmed ancestors of homo sapiens, shared the area with Neanderthals, a separate species of hominids whose DNA we might share, but who were quite likely driven to extinction by our forebears.

The West Bank has remained a site of cultural conflict pretty much ever since. The Battle of Jericho was the first charge by Israelites as they sought to conquer their so-called Promised Land; it is described in the Book of Joshua, in a section of the Old Testament where myth and history blur without hope of distinction. Later conflicts leave less room for doubt: it was destroyed twice in the Bronze Age, and again during the Iron Age; it passed from Persian hands to Roman, from Muslim to Christian, from Arabic rule back to Israeli, with bloody footsteps seeping deeper and deeper into the old stones.

But there is cause for celebration as well as grief at Jericho’s history, especially if you believe that Jesus healed a blind beggar there. Jesus also name-dropped Jericho in the parable of the Good Samaritan. The story only appears in one of the four Gospels, but it has none the less become one of his greatest hits, owing to its simple message of compassion and its winning narrative structure: 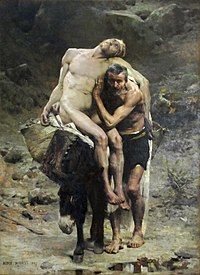 And, behold, a certain lawyer stood up, and tempted him, saying, Master, what shall I do to inherit eternal life?

He said unto him, What is written in the law? how readest thou?

And he said unto him, Thou hast answered right: this do, and thou shalt live.

But he, willing to justify himself, said unto Jesus, And who is my neighbour?

And Jesus answering said, A certain man went down from Jerusalem to Jericho, and fell among thieves, which stripped him of his raiment, and wounded him, and departed, leaving him half dead.

And by chance there came down a certain priest that way: and when he saw him, he passed by on the other side.

And likewise a Levite, when he was at the place, came and looked on him, and passed by on the other side.

But a certain Samaritan, as he journeyed, came where he was: and when he saw him, he had compassion on him,

And went to him, and bound up his wounds, pouring in oil and wine, and set him on his own beast, and brought him to an inn, and took care of him.

And on the morrow when he departed, he took out two pence, and gave them to the host, and said unto him, Take care of him; and whatsoever thou spendest more, when I come again, I will repay thee.

Which now of these three, thinkest thou, was neighbour unto him that fell among the thieves?

And he said, He that shewed mercy on him. Then said Jesus unto him, Go, and do thou likewise.

Jesus, like his audience, knew that the road between Jerusalem and Jericho was rife with bandits. He also knew (though modern readers may not) that Samaritans were a rival tribe of Israelites who traditionally showed nothing but hostility towards the Jews. Nowadays, we use “Samaritan” to connote a compassionate helper, like the figure in the parable; but to the original audience, it meant the opposite, which was JC’s whole point.

The idea of “neighbour,” which took shape as civilization rose unsteadily from the wilderness, didn’t always have to mean “the people near me.” Its meaning must have been at least somewhat fluid, or else why would the lawyer have asked, “Who is my neighbour?” Jesus’s simple, radical take on the notion was that neighbours didn’t need to have proximity, or kinship, or even ethnic similarity; they simply had to care for one another.

One day before his death, Martin Luther King, Jr., delivered his “I’ve Been to the Mountaintop” speech, in which he gave the Good Samaritan story new layers of humour, immediacy and relevance:

Now, you know, we use our imagination a great deal to try to determine why the priest and the Levite didn’t stop. At times we say they were busy going to a church meeting, an ecclesiastical gathering, and they had to get on down to Jerusalem so they wouldn’t be late for their meeting. At other times we would speculate that there was a religious law that one who was engaged in religious ceremonials was not to touch a human body twenty-four hours before the ceremony. And every now and then we begin to wonder whether maybe they were not going down to Jerusalem, but down to Jericho, rather, to organize a Jericho Road Improvement Association. That’s a possibility. Maybe they felt it was better to deal with the problem from the causal root, rather than to get bogged down with an individual effect.

But I’m going to tell you what my imagination tells me. It’s possible that those men were afraid. You see, the Jericho Road is a dangerous road. I remember when Mrs. King and I were first in Jerusalem. We rented a car and drove from Jerusalem down to Jericho. And as soon as we got on that road I said to my wife, ‘I can see why Jesus used this as the setting for his parable.’ It’s a winding, meandering road. It’s really conducive for ambushing. You start out in Jerusalem, which is about twelve hundred miles, or rather, twelve hundred feet above sea level. And by the time you get down to Jericho fifteen or twenty minutes later, you’re about twenty-two feet below sea level. That’s a dangerous road. In the days of Jesus it came to be known as the ‘Bloody Pass.’ And you know, it’s possible that the priest and the Levite looked over that man on the ground and wondered if the robbers were still around. Or it’s possible that they felt that the man on the ground was merely faking , and he was acting like he had been robbed and hurt in order to seize them over there, lure them there for quick and easy seizure. And so the first question that the priest asked, the first question that the Levite asked was, ‘If I stop to help this man, what will happen to me?’

But then the Good Samaritan came by, and he reversed the question: ‘If I do not stop to help this man, what will happen to him?’

It amazes me that Jericho exists, after millennia of human strife. People still live there, drinking coffee and selling bananas and misplacing their keys. For more than 10,000 years, humans have been conducting an experiment, to see if we can break the bonds of nature and be more than animals – more than predators or prey, more than kin – become neighbours. As MLK implies, the first step involves moving past the fear that helping another entails losing something of our own. JC says the opposite is true: help a stranger, and you gain a neighbour.

A prehistoric Post-Script: some recent archaological evidence suggests that maybe Cro-Magnon man did not exterminate the Neanderthals after all. This news is 40,000 years old, but it’s still good news. I take it to mean that even before there was a Jerusalem or a Jericho or a road between the two, we might have had the makings of good neighbours. I really, really hope that drift still dwells within us. In the next century or so, we’re going to need it more than ever. When the Walls of Jericho fell, at least they could rebuild them.