Where is the best place to get caffeinated and condescended to on Edmonton’s South Side?

This week my parasite has been at a hippie-led KinderArt half-day daycamp, leaving me free to kick around the Garneau neighbourhood for a few hours each morning. It’s been a chance to catch up on Edmonton’s coffee culture, wherein much has changed since I moved east seven years ago. My first disappointing discovery was that two of my old haunts are gone: Muddy Waters, formerly on Whyte and 111th Street, has morphed into a cake store, and my nearby back-up option, whose name I forget and whose coffee always tasted like Starbucks, has morphed into a Starbucks.

But not to fret; there are loads of cafés hereabouts, serving U of A students and profs, young moms with babies, and Fringe actors whose rehearsals haven’t started yet. After overcoming my grief about Muddy Waters, I headed north to… 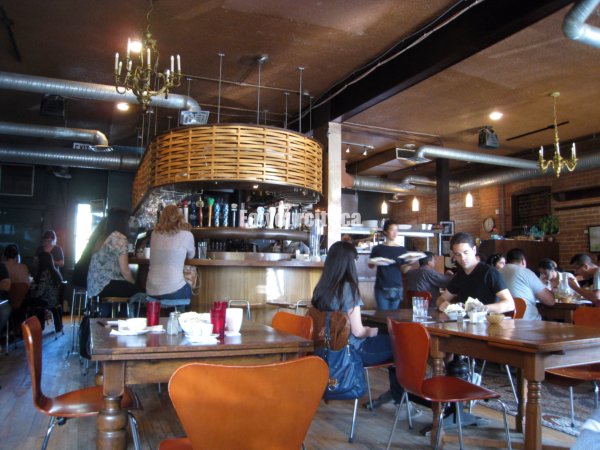 The Sugarbowl (10922 88 Ave), where my grad school memories blinded me to signs of change. Literally—I missed the sign outside saying “Please Wait to Be Seated.” In my heyday, the Sugarbowl was a laid-back café where one could stroll in, plunk down, and spend the next eight hours metaphysically making out with Jacques Derrida while servers kept one fuelled with lattes. But, as Derrida would say, plus ça change…

Now the Sugarbowl is all about breakfast, lunch, and ten beers on tap. Its servers crouch behind tall counters stacked with dishes and coasters, and when they emerge, they blend seamlessly with their hip young clientele. I didn’t notice them, and since I made the mistake of seating myself, they didn’t spot me for awhile, either; but once I’d been identified, they rushed to get me filled, swilled and billed.

If I thought the Sugarbowl was overstocked on pretention, I’d clearly forgotten about Leva (11053 86 Ave). This café was open before I left town, but I avoided it because of its snooty air. Turns out it’s still plenty snooty, but either I’ve grown more tolerant, or else my snoot has grown accordingly, because now I enjoy its sliding glass panel front, its European-style long tables (not so much its clunky plastic chairs), and its unmarked, dimly-lit washrooms. I’ll tolerate a lot of snoot for a good cappuccino, and Leva delivers: tiny cup, big flavour, flawless leaf atop the foam. There’s a fine line between pretention and class.

Transcend (8708 109 St) serves up a different flavour of hubris. Occupying the site of an unremarkable mom-and-pop pizza joint, Transcend has bleached the grease away, replacing it with gleaming, antiseptic monochrome—the coffee shop of the utopian future. Snootier still, the franchise’s manifesto is painted on the wall, 100 words in eight-inch letters. “We are united by a single cause,” it begins, “to make a better cup of coffee today than we did yesterday.” If Leva’s theme is “European Bistro,” Transcend’s ethos seems to be, “Coffee Commune Cult.” But the staff is bright and chirpy, and the java generally lives up to the hype. One fatal flaw, though: after repeated visits, I can confirm that nearly every table is wobbly. Time to revise your manifesto, kids.

I thought I’d find a familiar setting across the street in Remedy (8631 109 Street), but this Garneau mainstay had a growth spurt sometime while I was away. It was already spacious, with its upper-loft seating area, but after annexing the former video store next door, it has become a pastel-hued leviathan, languidly flaunting its open spaces and low-riding pleather chairs. Remedy specializes in East Indian snacks and chai tea, which are not my thing, but the coffee is above average in quality and size. They also serve Alley Kat beer on tap, as well as something called “Happy Unadulterated Orange Juice,” a product which would almost certainly win a Garneau Hippie Service Industry Weasel Words Award, if it didn’t face the daunting competition of…

Noorish (8440 109 St), the Conscious Eatery and Superfood Elixir Bar. I love that handle so much, I want to marry it. Noorish (say it out loud) is literally both restaurant and yoga studio, a combination which likely requires some delicate scheduling. I didn’t actually try Noorish—it doesn’t open till 11am (maybe to air out after hot yoga?), by which time I was always comfortably ensconced elsewhere. Besides, I confess I’m not all that eager to try their advertised “Bulletproof Coffee.” Like “raw food,” it’s not as appealing as it might be trying to be. Likewise putting “Buddha” in front of random menu items—I mean, I understand that Buddha is everywhere, but that doesn’t mean I want to be reminded of that universal truth while I’m eating. I’d rather Transcend on my own terms, I suppose.

Finally, though it’s not technically a café, I’d feel remiss if I didn’t shout out to It’Dog (8621 109 St), a nifty designer hot dog diner next to Remedy. They’ve got Shrimp Dogs, Bulgogi Dogs, Kimchi Dogs…if you can imagine dressing up a hot dog in some exotic flavour, chances are they’ve got it. There’s even one called the Hardcore Dog, but I brought my five-year-old in there anyway, and the TVs (showing goofy South Korean reality shows) distracted him from potential trauma.

P.S. I asked Garneau guru Todd Babiak for other café recommendations. His tweeted reply: “Farrow and Three Boars. Rosso. High Level Diner. Café Mosaics. Then cleanse at Noorish?” Damn. I guess it’s Bulletproof Coffee for me after all. I think I may have bitten off more than I can chew.