Last time, I wrote about the introversion and isolation that comes over me when I’m forced to abandon my mother tongue and interact in a new language. There has been one semi-exception – an activity that seems perfectly designed to coax me out of my linguistic shell without completely draining my social tide pool. It’s called Franglish. 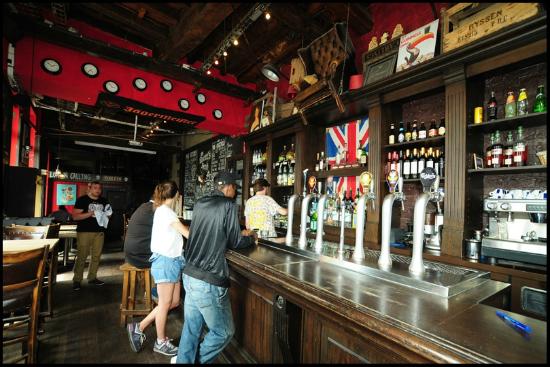 The word, if it can be called that, normally refers to a pidgin mix of French and English, but this event strives to be a bit more cut-and-dried. It structure is akin to speed-dating: participants are seated in pairs, and you have 14 minutes to chat before you get shuffled around. The pairs are not arranged by gender, but by language: one Francophone, one Anglophone. You choose a language and gab for seven minutes, at which point the organizer tells you it’s time to switch.

I found out about Franglish through a site called meetup.com, which lists gatherings of every sort, from pregnant yoga (“We’re 36 femmes enceintes”) to Bike & Beer Around Lille (“We’re 184 beerkers”). Franglish is weekly on Tuesday nights, a far more regular schedule than most of the other groups that interest me. They meet in The Queen’s Head, a fabulous French simulacrum of an English pub. The décor is faux-punk, and the only concession to Britishness behind the bar is Harp lager on tap – Harp, which is brewed in Dundalk, which is in the Republic of Ireland. Close, but no cigar.

The Franglish event takes over the bar’s upper floor; both times I went, I arrived on time and was one of maybe three people present, but within 15 minutes, the room was full. I’d estimate between 10 and 15 tables were active, which leads to a lovely variety of encounters (I was afraid that, the second time I went, I’d end up talking to the same six people as before, but there were no repeats). The ambient chatter is distracting, and the ready supply of beer is likely not conducive to perfect elocution, but when I keep my stakes and expectations low, it all works out.

My very first pairing was with Isabelle, a middle-aged woman who works for several different non-profits and city-run institutions, including a museum dedicated to the French Resistance movement in WWII. She spoke English with confidence; she was obviously just there to keep in practice. But the next few partners, all young men, struggled more with their second language. They were either students or recent graduates, and most of them worked in the tech field. One guy had just started working for a big-deal coding company, and I guessed that his newfound resolve to learn English arose from observing how many of his senior co-workers had the language in their repertoires.

The best exchange of the night was with Simon, an art student, who started off cautious and closed-off, but quickly became enthusiastic when I matched his geek credentials. We ran quickly through art and comics, films and TV, before settling on a deep dive into Philip K. Dick’s postmodern science-fiction novels – a hefty subject even in one’s mother tongue. Having once taught Do Androids Dream of Electric Sheep?, I found myself trying to summarize my arguments about the book’s thematic treatment of the alienating and dehumanizing effects of technology…in French. When I get that deep into a subject, I find my only hope is to start frenchifying English Latinate words – l’alienation, déhuminazation, technologie – and hope a few of them, at least, aren’t gobbledygook.

My first trip to Franglish was exhausting, but somewhat inspiring. It reassured me that I was capable of pulling my weight in a conversation about something more complex than the price of figs. It also exposed me to a broader cross-section of Lillois – still limited, in that all the Francophones who came had some reason to learn English – but more varied than my exposure to, say, kindergarten teachers. It made me realize I hadn’t made any efforts to get to know anyone since I arrived. This event made it relatively easy, because even a Canadian can’t just complain about the weather for 14 minutes.

After my bout of pneumonia, I went back, this time dragging Sheila along (and leaving X with his first French babysitter). My lineup was more varied this time: I met Elodie, an African immigrant who was hoping to attain permanent residency in Canada soon; Arnaud, who spoke with great enthusiasm about his work “incubating” cutting-edge products into a French chain of tech stores; Matthieu, a well-traveled young professional recently arrived from the south of France (“Au sud, nous sommes plus génials” – more awesome); and Manon, a chatterbox from the Bretagne region in France’s northwest (“Au nord, nous sommes plus génials”).

Although the conversations often veer in unexpected directions, the introductory patter is the same. I am now extremely well practiced in explaining our reasons for taking a year off, our reasons for choosing Lille, and my lack of active writing (“la pneumonie” earns a lot of sympathy, although as Matthieu pointed out, it’s a mite ironic that someone from the Great White North would come to France, in late summer no less, to catch pneumonia). By the end of the second night, I was starting to hope I would get some repeat traffic, so that I wouldn’t have to repeat my origin story a thirteenth time.

Things I’ve learned about French conversationalists: they are happy to correct your grammar, but reluctant to accept correction of any kind (one guy refused to accept my assurance that no, Johnny Depp was not Canadian). They are ignorant about Canada except for Québec, but they’re curious, or at least willing to feign interest. And they respond to compliments about their town/country/culture/language with elegant false modesty – when in truth, they know exactly how génial they are.