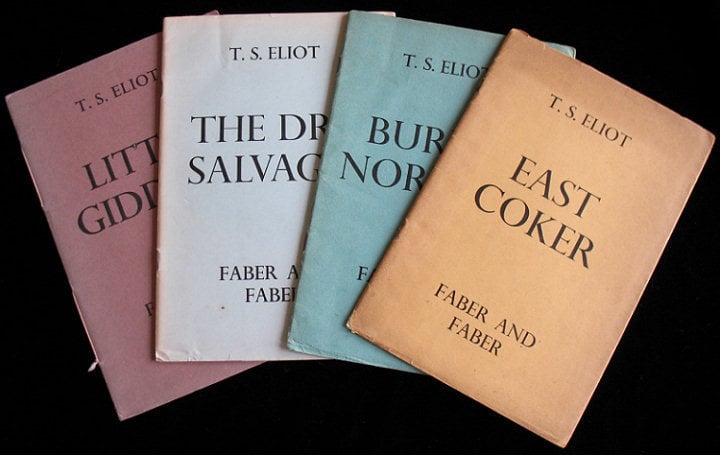 A few years ago, CBU’s Department of Languages and Letters consolidated their offices in a single wing of the Campus Centre building. They voted to decorate the hallways with large framed photos juxtaposed with inspiring literary quotations, although in true academic fashion, no one agrees on what constitutes “inspiring.” Thus bell hooks’s “No woman writer can write ‘too much’ … No woman has ever written enough” hangs on the wall alongside Shakespeare’s “If to do were as easy as to know what were good to do, chapels had been churches, and poor men’s cottages princes’ palaces,” and so on.

I was asked to choose a quotation. I went back to a poet I loved dearly in my own undergraduate years, and a poem quoted at my wedding: T.S. Eliot’s The Four Quartets. It’s a meandering, melancholy work – neither as radical as The Waste Land nor as personal as J. Alfred Prufrock – but it ends with a bang, not a whimper:

We shall not cease from exploration
And the end of all our exploring
Will be to arrive where we started
And know the place for the first time.
Through the unknown, unremembered gate
When the last of earth left to discover
Is that which was the beginning;
At the source of the longest river
The voice of the hidden waterfall
And the children in the apple-tree
Not known, because not looked for
But heard, half-heard, in the stillness
Between two waves of the sea.
Quick now, here, now, always—
A condition of complete simplicity
(Costing not less than everything)
And all shall be well and
All manner of thing shall be well
When the tongues of flames are in-folded
Into the crowned knot of fire
And the fire and the rose are one.

We used just the first four lines on the poster, mind you (no sense in scaring away the freshmen). They are my favourite lines, anyway; the metaphor of the fire and the rose may be achingly beautiful, but it’s the process of exploration/return that I keep coming back to in my own life. Funny about that.

It’s been one year now since we left Cape Breton for the radical sabbatical: Montreal, Kelowna, Edmonton, Japan, London, Lille, Belgium, Amsterdam, Kathmandu…phew. In some ways, the whole thing seems redundant and self-indulgent now, like an elaborate reboot of an old TV show. After all, I’d already lived in France before, albeit not for eight months. And though it was my first time visiting Japan, the whole reason for going was a reunion with friends I’ve known for 30 years. Talk about arriving where I started. The simile about the TV reboot wasn’t random, either. In pop culture terms, I’m passing through a long, bright tunnel of mirrorball nostalgia. Everywhere I look, my childhood loves are being offered to me in fresh, CGI-enhanced formats: all the Marvel superheroes are teaming up on the big screen; Doctor Who is better than it ever was; there’s a new Star Trek series right around the corner; and Twin Peaks. Just…Twin motherf*@!ing Peaks. It shouldn’t surprise me: I’m the ideal demographic for Hollywood to profit off my former obsessions. But it’s harder to be critical when I’m being pandered to at every turn.

Then again, why be critical at all? In France, I didn’t have access to my entire iTunes catalogue, so I sometimes dialed up old favourite bands on Spotify. One such band was Failure, a grungy alt-rock band from the 1990s whose third and final album, Fantastic Planet, had buoyed me through the angst of my early twenties. Quelle surprise, to discover The Heart is a Monster, a 2015 release from the same band. And quel miracle, to find the band sounding exactly the same, as if two decades hadn’t passed. Why look that kind of gift horse in the mouth?

Because I can’t help feeling like it’s a trap, a Lotus-laden island in my latter-day Odyssey. There’s even a lyric from the new album that seems to warn me away from it:

One more sunlight breaks you down
The counterfeit sky sells you out
After all the change, nothing’s changed
Wake up laughing and don’t know who you are

“After all the change, nothing’s changed.” It’s the nightmarish opposite of Eliot’s benevolent vision of personal evolution, returning to the place you started and knowing it anew. It’s what I dreaded, returning exhausted from a bewildering sabbatical year and promptly slipping back into all my old, bad habits at home. I’ve only managed to avoid that fate by accepting the job at Louisbourg, but that’s only for the summer; I remain fearful of the fall, when I’m back at CBU, walking amidst the framed inspirational quotations but never really stopping to read them.

“Wake up laughing and don’t know who you are.” If you’re reading my blog, you know I spend a lot of time on “Who am I,” and likely not as much time as I ought to on “laughing.” If what makes me laugh or smile or feel like “myself” is recycled pop culture or unchanging guitar riffs, why resist that? I’ll fly to Japan to see old friends. I’ll plunk down 15 bucks to see Luke Skywalker or Spider-Man. I’ll end where I started, comfortably swaddled in familiar faces, stories, sounds.

Except right now, I don’t feel as if I will “know the place for the first time.” My wife came home and swiftly began organizing a theatre project to help Cape Bretoners better understand their own relationships to community. Me, I’m still trying to set up a regular role-playing game group.

At least there’s one thing about myself I can count on: I’m restless. “I shall not cease from exploration,” even if that exploration often takes the form of wondering whether my exploration is bona fide. I guess I have faith that’s more than Lotus-eating, and that listening to the same bands play the same music will eventually provoke some new idea – as it has done here. Failure is success.