I have uncovered a motif in my own blogging: I often feel obliged to drop a reference to climate change into an otherwise unrelated article. Reading back over my posts (everybody does that, right?), I realize what a vice it is: not only is it poor writing to hijack my own subject matter, but it’s the literary equivalent of those fakeout video memes that make you lean towards your screen and then flash a picture of a bogeyman in your face. Come for the bon mots, stay for THE EARTH IS DYING.

It’s displacement, I’m afraid. I know objectively you’re not at fault, dear reader, for the fact that as many as 37% of all species on Earth may be extinct by 2050, or that by the century’s end North America will face a megadrought, compounding the loss of up to 20% of its freshwater glaciers. But I can’t take responsibility myself – like you, I turn off the lights almost every time I leave a room – and I can hardly blame the French, who ratified the Paris climate accord before any other country, if only ‘cause it’s got their name on it. So, at least until I get back to Canada, I have no one else to blame.

I’ve also realized that I have no idea how to write effectively about climate change. As a playwright, I enjoy tackling big questions, but they need to be questions I can clearly and succinctly reduce to human actions and perspectives. Henrik Ibsen’s 1882 play An Enemy of the People, probably the first environmentalist play written, pits a scientist against a town full of profit-minded pollution-deniers. After writing it, Ibsen said he didn’t know whether it was a drama or comedy. I know the feeling; is it more appropriate to laugh or to cry as the sky falls? If “the greatest trick the devil ever pulled was convincing the world he didn’t exist,” then the climate change so-called debate is the devil’s apocalyptic encore, the fake hoax that arms the consumerist masses with just enough doubt to justify idling their cars in the Starbucks drive-thru. It’s tempting to follow in Ibsen’s carbon-footsteps and write a play about a heroic, clear-sighted liberal whose courageous call to action goes unheard, but that’s practically wish fulfilment at this point. There have been such heroes – Nader, Suzuki, Captain Planet – and their calls have been going unheard for so long, it’s hardly even drama anymore.

Besides, if Ibsen couldn’t stem the tide in 1882, back when people actually went to theatre, then what hope do I have of making an impact with my chosen medium? The kind of people who go to plays in 2017 don’t need convincing, but they also aren’t in any position to tip the scales. It feels equally useless to take my agenda to the internet, where every attempt at calm, rational persuasion gets slapped with a tsunami of defensiveness and ad hominem attacks. Besides, do you know how much energy it takes to run the internet? Every message in a bottle I could launch feels like just another hunk of unrecycled glass.

Climate change is complicated and abstract and it’s hard to see where we figure into it, or how we can avert its disastrous effects, but one thing is certain: it makes us uncomfortable. It’s more comforting to watch The Walking Dead, because zombies are a reassuringly familiar way for the world to end. Far more discomfiting is the implication that, in order to be part of the solution instead of the problem – in order to help save the world – we must voluntarily make ourselves even more uncomfortable. Pain is hard to accept, but we endure a modicum of suffering when we know the payoff; chemo sucks, but cancer kills. But this? We are being asked, vaguely and half-heartedly, to sacrifice not health but comfort – and not just briefly, but forever. 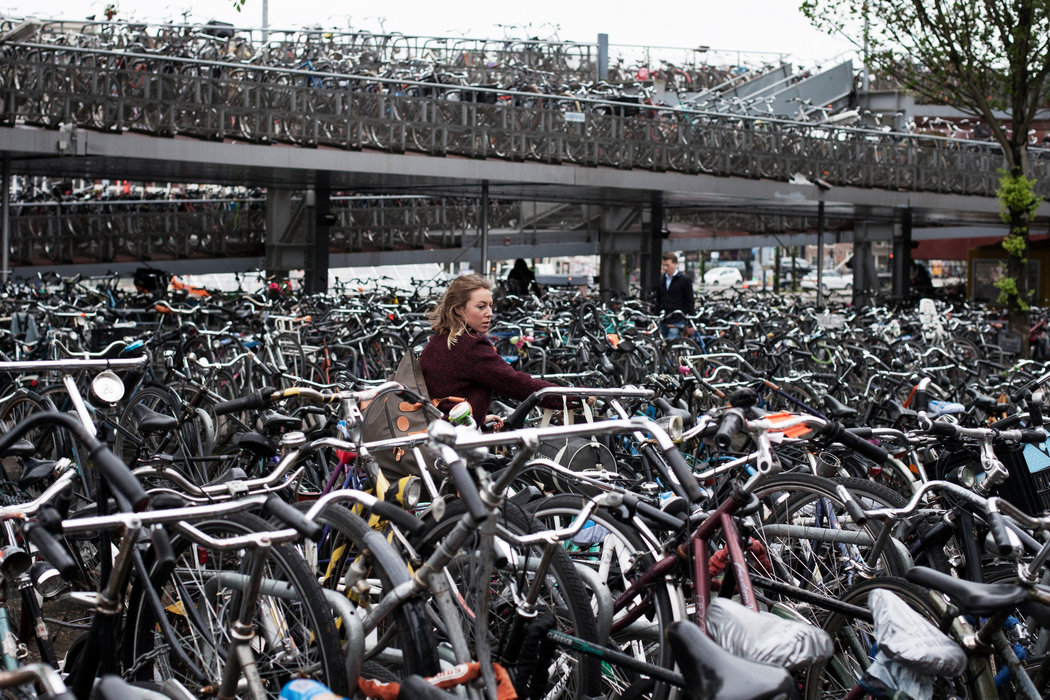 In Amsterdam, I saw a city rising to the challenge of climate change, with electric-car power stations and a magnificently high bike-to-car ratio. The Dutch seem to accept environmentalism without question; from solar-powered roads to wind-powered trains, they’re cheerfully implementing alternative-energy solutions that the rest of the world hasn’t even heard of. Yet there’s evidence that the Netherlands is not as green as it appears, with fossil fuels still powering the liberal country’s infrastructure. Just as the threat of climate change is invisible and insidious, so too are the causes.

So if I can’t write a play that will fix the problem, and I can’t move to Amsterdam and hide from it, what the hell can I do? My wife’s tactics tend to involve community engagement – help organize repair cafés, local food-sharing co-ops, etc. – but I’m more about advocacy, at least in theory. When I read about a potentially high-impact solution – for example, the theory that airlines could reduce their climate impact by 10% simply adjusting flight routes – my impulse is to write letters to MPs, MLAs, and Prime Minister Smiley until somebody changes some laws. Perhaps we are both living in dreamworlds. Is it more fantastical to imagine that Cape Breton could sustain itself in a post-petroleum world, or that politicians will act in the best interests of their constituents, especially when big business disagrees?

Paying attention to your community makes sense. So does speaking up. But all that busywork is really just our means of avoiding the central, devastating dilemma that climate change presents to us all: how much are you willing to give up, while you still have a choice about it? This Scientific American article lays it all out pretty succinctly: Are you willing to trade your car for a bus pass and a bicycle? No? Are you willing to move closer to work? How about going vegetarian? Giving up long-distance food and drink that burn fuel through transportation? Am I so privileged, so complacent, that I can’t bear to go without bananas or pineapples or…or coffee?

Sometimes, even a logical mind requires a false dilemma to escape paralysis. Would I rather live give up coffee or my car? Which would you choose?