Last day in Edmonton; last coffee shop stop. Iconoclast Koffeehuis is every bit as pretentious as it sounds, but it’s the scrappy, warts-and-all pretention I mostly enjoy. It occupies a cavernous warehouse space that would fit three Second Cup locations, yet there are maybe 10 tables in all, and hardly any décor save for three bicycles suspended from a concrete wall. There’s a turntable and two milk crates stuffed with vinyl, but the soundtrack (Radiohead, natch) currently comes from the barista’s iPod.

Even Iconoclast’s location is quirky: near downtown Edmonton, the café is sandwiched between the forthcoming Brewery District (offering everything rich millennials could want in a neighbourhood: beer and beer-themed other stuff) and Edmonton Cemetery, the city’s oldest graveyard. The café’s rolled-up garage-door entryway overlooks the latter, but around the fringes of the unchanging gravestones, hallmarks of progress are visible—which, in Edmonton, means construction signs.

It’s a ridiculous place for a ridiculous café. Iconoclast is the sort of shop that you half-think might be gone tomorrow—like Brigadoon, it only appears once every century, when the right coffee beans are roasted under the harvest moon.

I joke to distract myself from the truth: Edmonton will be different by the time I visit next, in two years or more. Businesses will sink, condos will rise, and my friends and family will age. It’s easier to write about the café I’m writing in than to write about what I’m really writing about: a farewell to YEG.

I always feel as if I make a mess of farewells. Today, for instance, I was trying to set up lunch with one friend, but I had to back out, citing the hangover which I earned from last night’s debauchery with other friends. Tonight, I may meet with a different friend, but more than likely, I’ve put it off too late, and one of us, or both, will chicken out. What difference does it make? At this stage, it feels like I’d only be saying hello in order to say goodbye. 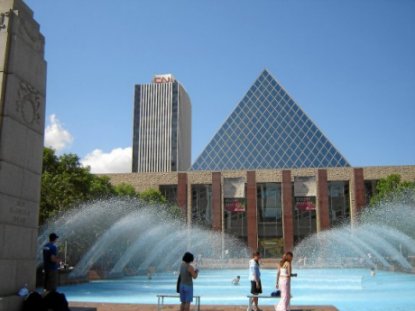 Everybody knows we’re moving to France for a year, but nobody knows what questions to ask about our sabbatical. That’s fine, though, since I really have no answers. Most speculations sound mundane—X goes to school, S researches & writes, and Scott reads & writes—so mundane, one might well ask, “Why bother?” Why go to France to do exactly the same thing you were doing in Cape Breton? Why even move there, some Edmontonians might say, even seven years after we left? And I don’t know, except we’re all sick of doing that stuff in Canada.

It’s not as if we lack the imagination to completely overturn our lives. We’re just not sure if we want to yet. So France is a kind of test run, or a compromise—meeting adventure halfway—and kind of a visioning retreat. I don’t exactly know how that’s supposed to work, but I have faith in the principle: step away from your normal environment, and you’ll see it afresh, along with other possibilities for happiness.

Staying in Cape Breton, where we have great new friends and a strong community, still holds plenty of appeal. But a month in Edmonton has reminded me that I have old friends here, people who understand and accept me, along with some acquaintances I’d love to get to know better. I can’t manufacture closure with any of them—all I can do is reassure the Capers, and the Yeggers, and myself, that we’ll meet again, and we can pick up where we left off. Sometimes, if I believe that hard enough, it even comes true.

In a perfect, perfect scenario, I’d take everyone to France with me; we’d form a little community within Lille, and we’d all venture out of our bubble to explore, and then bring back our discoveries for mutual appreciation. But that mad plan assumes that my loved ones care about Lille, which they mostly don’t. They care that I care, and they can even share in my excitement, but that doesn’t mean they’d make the leap. They don’t have to like what I like, either. Friendship doesn’t hinge on mutual interest or even mutual traits, although it’s lovely when those things line up. Mostly, I enjoy seeing my friends get excited about…whatever. And they feel the same, which is why they ask about France in the first place; they want to share in my enthusiasm.

Over the course of the summer, I’ve managed to muster up enough enthusiasm to send most of my Edmontonian friends away content. But today, with less than 24 hours before the plane takes off, I’m tired of feigning excitement. A year in France is daunting, overwhelming, mind-numbingly terrifying. When I look across the street from Iconoclast, I can see white vapour trails bisecting blue sky above the cemetery. Soon, I’ll be making trails myself, but a vast part of me would much rather dig in, down beneath the soil of my first home—or else make myself a mausoleum that resists all kinds of change.

Sharing my anticipatory glee has been golden, even when partly feigned. Now, it’s time to make the journey real. It’s a bittersweet thrill, but I believe that a big part of being human is sampling more than one flavour at the same time.

Now, to find out what sort of new flavours they offer in France. Thanks to all who have helped make this summer so special. I’ll raise a glass, or a fork, in your honours. Bon appétit!