One of the reasons we chose Lille as our sabbatical home is its position as carrefour – a crossroads, or jumping-off point to northern Europe. Lille is in the northernmost part of France, and thanks to Europe’s excellent high-speed train network, it’s within 2 hours’ travel of Paris, Brussels, Amsterdam, Luxembourg, Cologne and Frankfurt, and (via the Chunnel) London. To take full advantage of our options, we’ve kept an eye on cheap fares, and on interesting opportunities for art and culture nearby. Recently, we put the project into action with three daytrips (well, two plus an overnight). The results were mixed, but promising overall.

Last Wednesday, S and I left X in the capable and generous hands of Grandpa G to attend a day-long symposium on educational immersive theatre. It felt strange and daring that, in order to do this, we would travel to a different country, a separate time zone, and oh yeah, under part of the ocean, then return later the same day. Canadians aren’t accustomed to that kind of travel, unless you live very close to the US border, perhaps.

The symposium was run by London’s Punchdrunk Theatre, whose promenade-style theatre piece Sleep No More was the highlight of my 2014 visit to New York City (not a daytrip). The London workshops focused on ways to fulfil educational mandates using drop-in theatre experiences – like transforming your school’s library into a magic shop to teach kids about science, or installing a time machine in a public place to teach history. I learned a lot, but all the travel made for an exhausting day. I certainly had no zest left for schmoozing.

Two days later, it was Armistice Day, so X was off school. We all hopped on a train to nearby Ghent, Belgium, and stayed overnight. Ghent is a charming tourist town, not only because of its chocolatiers and waffle stands, but because of its canal-side architectural marvels and its 900-year-old Castle of the Counts (its name is even cooler in Dutch: Gravensteen). It was the latter attraction that we hoped would tickle X’s fancy, since he currently spends much of his free time playing The Legend of Zelda on his Nintendo DS. A real castle ought to be much cooler than a 64-bit one.

It turns out that, while a 5-year-old castle enthusiast can enjoy Gravensteen, he does not always do so on grownups’ terms. In Zelda, if you fall off the parapets into the moat you lose, at most, a quarter of one life point. Here, it was hard to impress upon X that most of the things he was exploring were either (a) lethal, (b) precious and not to be touched, or (c) both of the above. There was also a hard revelation for the grownups: medieval castles don’t have elevators. We left Gravensteen exhausted, and agreed to give up touristing in favour of parenting for the remainder of the night.

In the morning, still bone-tired, we tried to explore Ghent a bit more, but quickly gave up and caught an early train back to Lille. Our failure to make the most of the transnational foray provoked a family crisis, which lasted for another day or two. It seemed as if the three of us wanted incompatible things from our holidays – S sought art and culture; I’m mostly interested in pubs and coffee shops; and X likes hanging out in hotel rooms and playing The Legend of Zelda on his Nintendo DS. If one of us didn’t get what they wanted, our malaise quickly tainted the others’ experiences. What to do?

We fared better when exploring England, way back in October, but that was a 10-day affair, allowing us to pace and plan much differently. Maybe, then, the daytrip/overnight model just isn’t for us? 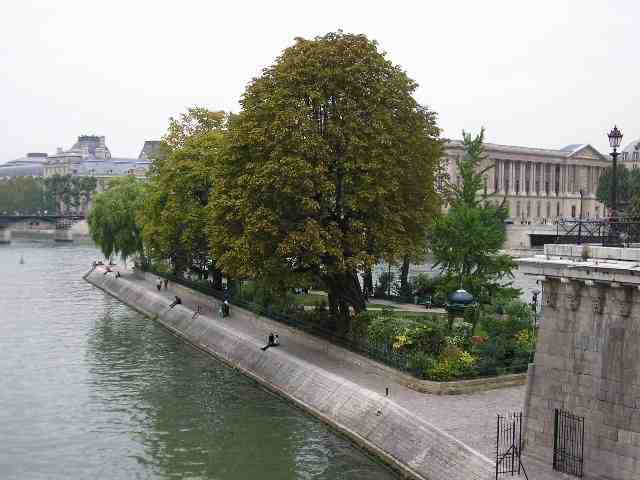 While mulling this over, I did what comes naturally: I took another daytrip. Just me this time, and just to Paris – the long-deferred pilgrimage to my favourite city in the world. I toured the Palais Garnier (aka the Phantom’s Opera House), explored some Roman ruins, and revisited the magnificent Sainte-Chapelle. I did not get to sit in my favourite park, as it was closed for cleanup, but I found another one nearby I rather liked.

The day was grey and chilly, and that umbrage would have affected me more, I think, if I were trying to shepherd a kid around, and keep everyone’s spirits up. But alone, I didn’t mind the cold. Left to my own devices, I could seek out magic at my own pace. The weather even suited the mood of my Gothic novel, and I scribbled a lot of valuable notes in cafés, parks, and on the train back home.

Back in October, when X and I spent four days together in Ipswich while S attended avant-garde theatre, X’s favourite activity was “getting lost” – that is, wandering aimlessly while he converted the town’s streets into an analog video game for his amusement. It’s just a thin difference from what I did in Paris, turning the things I see into descriptive grist for my book. Why, then, do we have so much trouble playing off each other?

The fault is mine, for narrowing in upon one type of magic only. My grasp of history and culture is not perfect, but it affords me views of Europe that X can’t reach yet; however, that does not necessarily make my daytripping richer or deeper. If X treats Ghent or Ipswich as extensions of the Hyrule Fields or Death Mountain, I should be able to integrate that with my own perspective without diminishing either one. In theory, then, the principle of family daytripping should be the same as the cardinal rule of improvisatory theatre: say “Yes, and—” to whatever your partners say.