We’re sitting in a terrace outside Moulin D’Or, a restaurant in the Place du Théâtre, one of Lille’s many town squares. Actually we’re in the second-class terrace – the covered tables are for customers ordering food, mostly mussels or meat pies; mere coffee drinkers like ourselves sit on the outside of the fenced-in patio, closer to the restaurant proper, but immediately adjacent to the endless stream of tourists and Lillois pedestrians. Also, we are downwind from all the smokers in the first class terrace. Never mind, though. 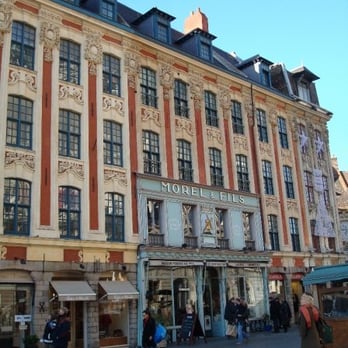 The Moulin D’Or has been in operation since 1813, which is almost twice as old as the entire city I grew up in. The building it inhabits, though, is much older. Like most structures in Vieux-Lille, it’s hard to date exactly, although an architectural historian could likely point to the floral décor above the lintels, the bright red bricks of such-and-such a size, or the elaborate…hmm, let’s go with “Flemish cartouches” – you know, that curly stonework up between the third floor windows, you can choose a name – and come up with an exact date. My thoroughly uninformed guess would put it in the mid-18th century, but only because there are flourishes that remind me of the Fortress of Louisbourg back in Cape Breton.

Oh, also: lodged amid the bricks on the third floor, there’s a cannonball painted like a tit.

I’d never have noticed it myself, or if I had, I would have doubted my vision. But G pointed out a half dozen black spheres embedded in various walls around the square. Most of the balls are black and slightly larger than fist-sized, but this one is a cantaloupe of a cannonball, and at some point in the mists of history, some wag leaned out the nearby window and painted it pink, complete with a dusky rose nipple, angled up slightly to salute the Opéra across the square.

It’s no coincidence, perhaps, that the second floor of Moulin D’Or is occupied by Morel & Fils, a lingerie shop. Nor that the building reputedly once housed Lille’s first brothel. But none of that explains the presence of the cannonballs; for that, we must perform a deep dive into the region’s history. For the uninitiated, Lille is situated in the northeast of France, about 2½ hours north of Paris.

In 1792, shortly after the French Revolution, the Austrians decided to try taking back some of the territory they once owned in the northern provinces. They laid siege to Lille, which by that point had been controlled by the Gauls, the Saxons, the Franks, the Vikings, the Romans, the Dutch, and the Duke of Burgundy, before bouncing between Austria and France. Along with all the hot-potato politics came battles and sieges – G describes the area around Lille as one of the most war-torn regions in the world – so the 53,000 residents of Lille were prepared when the Austrians rolled in with their cannons. They held fast for eight days, and the Wiener Schnitzels gave up.

G reports that it was the heat and smoke from the cannonade that slowed down the balls’ velocities just enough, so that instead of smashing through the walls, they lodged themselves inside the bricks without bringing down the buildings. Today, the balls themselves are national treasures, which means you’re not allowed to disturb them – including the tit, now suspended above Lille in all its ribald glory for eternity. Make love, not war.

Earlier, I floated Louisbourg as a Canadian equivalent to Lille’s living history, but in fact, they are incomparable. The Fortress of Louisbourg has plenty to recommend it, but it’s a re-creation of a settlement that met its end 300 years ago. Closer Canadian analogues to Old Europe would be Quebec City and Old Montreal – except even then, you’re looking at maybe four centuries, tops, of European activity. The oldest extant buildings in Lille are, indeed, about 400 years old, but its history as an inhabited region stretches back at least 3,800 years. So, in truth, if we’re looking for North American parallels, we’re talking about First Nations.

I claim no First Nations heritage, although I love and treasure everything I’ve learned about, and experienced of, their cultures. I’m also not really French (or Austrian); my roots are English/Scottish, and while members of my family have fancifully declared that we are related to the explorer Samuel de Champlain (Sharplin…Champlain…eh? Maybe?), there exists no genealogical evidence to back us up. Yet I still feel more at home beneath these tall brick rowhouses and neo-Gothic spires. There is something I find soothing about boundless history.

My favourite park in Paris (I’ll write about it at length when we get the chance to visit there, soon I hope) lies adjacent to a 12th century Romanesque church, and features the oldest living tree in the city, a locust tree planted in 1601. That tree has been blooming since before Shakespeare wrote Hamlet…before the first steam engine chugged to life…before the first surgeon washed his hands before administering the first anaesthetic…before the first satellite ricocheted the first cellular signal back to Earth. It’s reassuring to think about how much that tree has lived through, and it’s a relief to compare my small self to its branches, stretching out effortlessly through time as well as sky.

It is good to be here, in Lille at last, after so much planning. It’s good to spread out, in my small way, reaching across countries and continents. But it’s also good to know that I will not become lodged here, like those cannonballs, trapped in history. I want to stay fluid, like the groundwater that feeds the world’s oldest trees, like the spilled lattes that trickle through the cobblestone drain-grooves that ring the Place du Théâtre.

And, if I do make a mark or leave a legacy, let it be less like the Austrians’ cannonballs, and more like the golden arm that hangs off a balcony just up rue de la Grande Chaussée. G has asked around, but no one can explain how or when that arm got up there. I love an unsolvable historical mystery, because it makes storytellers of us all.

Just for the record, that building – as part of the “rang de Beauregard” – is dated 1687, but is not the one that housed the first legal brothel – that was where the restaurant Omnia is now located, on the Esquermoise. And Morel & Fils owned the Maison de Moulin d’Or, so the two names refer to same (two-story) place; it was a lingerie shop until (I think) 1997, but has apparently only been a café since 2003 or 2005. In my brief attempt to confirm dates I discovered that the nipple is a cork, embedded there only during the renovation of 1997!