Douglas Adams would be pleased at the amount of absurdist bureaucracy and sheer Britishness that characterized my 42nd birthday. We were staying in an airbnb near Old Street Station in London; usually X woke us up promptly at 7am, but this morning S let me sleep in while she and X got breakfast at a nearby hippie cafe. Then we hung around in the grimy apartment for a couple of hours, playing Hogwarts-inspired make-believe until we got hungry again. 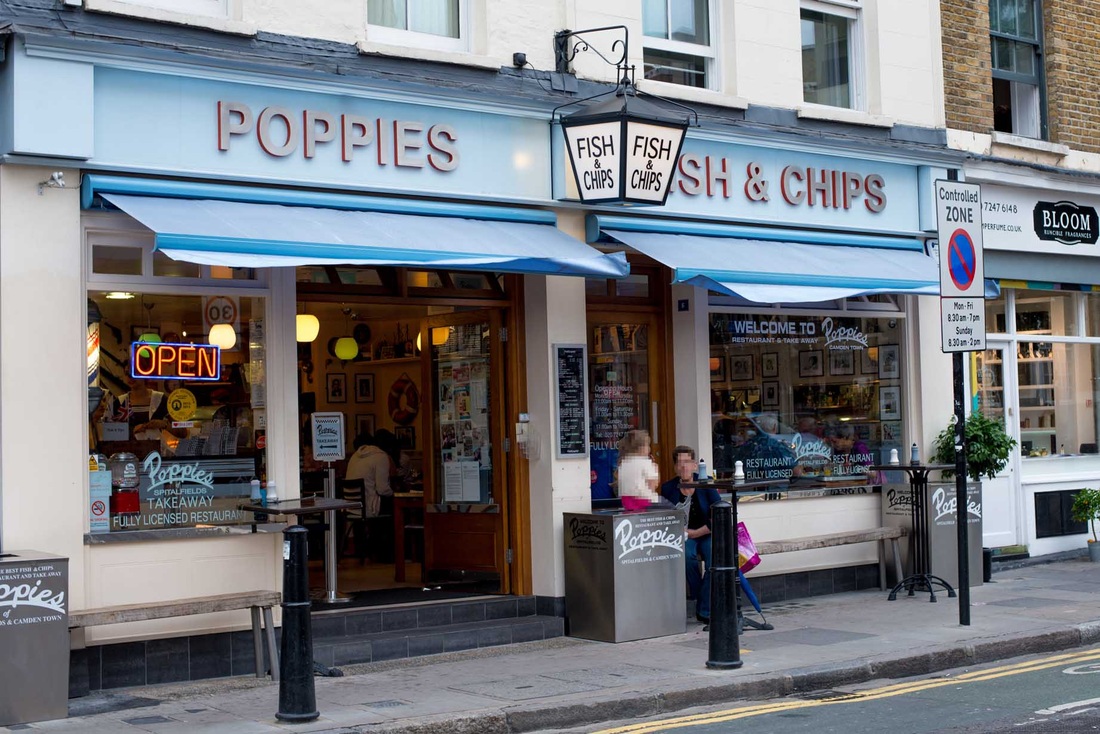 We caught a bus to Poppie’s Fish & Chips in Spitalfields. Riding the double-deckers with X is fun, because he insists on sitting up top and right at the front. Even though he then tends to dive into his notebooks and ignore the ride entirely, it still gives me a chance to catch a lot of the wild Londinian architecture. Back “home” in Lille, there’s either 200+-year-old stone buildings or, once you step out of Vieux-Lille, post-war brutalist urban sprawl. But London somehow managed to hang onto architecture from every era, despite devastations like the Blitz. I especially love the deep red brick of some Victorian structures. I find myself wishing I knew more about the history and lexicon of architecture. Maybe that’s a mission for my 42nd year.

The fish and chips were spiffy. After lunch we split up, with S lingering to explore Spitalfield Market while X and I caught another bus up to Islington, where we would try a second time to gain entry to Barnard Park Adventure Playground. We stopped there two days earlier, but found it locked tight; today, we arrived during the volunteers’ lunch break, but within 10 minutes they were open to receive X.

In Canada, an “adventure playground” is usually an indoor affair, with lots of brightly coloured climbables covered with foam padding. The Barnard Park playground was open-air, on dirt and concrete, with lots of high wooden towers and tippy walkways connected by ropes, balance beams, and zip lines. It all looked rather lethal, but I told myself I’d be close at hand to assist X, or to talk him out of anything too risky. Nope. The two no-nonsense women running the park forbade my entrance. “No parents allowed,” echoed the voices of the 15 English kids whose territory this so obviously was. I seriously considered aborting, but X’s heart would break; he’d already seen the mystical wooden towers once from afar, and now we were so close, he could taste it. So I signed a waiver, entering my French mobile number with no confidence that it would even work in England, and guaranteeing that my 5-year-old son was at least 6 years old. Then I retreated to outside the fence, to hover and fret while my little Wendy joined the Lost Boys in Neverland.

Later, S contextualized the whole project as “rough play” — a pedagogical philosophy that doesn’t get much traction in North America. Not only did the kids fine-tune their motor skills while sustaining bruises and rope burns, but they could also retreat to the volunteers, to help them with chores like hammering, sawing wood, lighting pit fires, and making popcorn. From the glimpses I caught through the fence (where I stood skulking and peering in, looking like a Class A pervert), the kids did indeed play rough, but they also took care of one another, and knew when to fetch a volunteer if their help was needed.

Between heart attacks, I reflected on the nature of risk. S and I are somewhat over-protective parents — not too helicoptery, but keenly aware that we are raising a sensitive, unorthodox child who doesn’t always know his limitations. Yet the behaviour we usually model for X stems more from our personal philosophy: risk everything. If we didn’t embrace risk, we wouldn’t even be here, living in Europe for a year, throwing ourselves into deep, strange waters at every opportunity, with every project. Small wonder where X gets it from.

The results of the “rough play” experiment were positive. Several times, X came out of the park in tears, seeking my consolation for a bumped knee or a hammered thumb. But none of the injuries were serious, and within minutes he was eager to rejoin the throng. The cycle reminded me of the difficulties he’s faced in kindergarten: he wants to push himself, and he wants to be physical and rough at times, despite his soft exterior; but he also needs security, little reminders that he’s loved and protected. At maternelle, he has plenty of opportunities for the former, but no support network for the latter. But we’ve hatched a plan to help with that.

Eventually, S caught up to relieve me of my harrowing parenting duties for the remainder of the day. She also brought two thoughtful gifts she’d bought at the market: an hourglass and a quill pen. Both were purchased with my upcoming writing project in mind — another example of risk everything in action — and, while the items will likely serve functions more symbolic than practical, it’s nice to know that my wife, who is also my patron, has my back.

And so, off I wandered, through churchyards, into the bureaucratic heart of the British Library, and finally to a David Bowie jukebox musical. Stay tuned!