I had very few preconceptions about Amsterdam, because references to the largest city in the Netherlands are oddly rare in North American pop culture. In Pulp Fiction, Vincent Vega has recently returned from hiding there, and he tells his partner Jules all the rules surrounding marijuana: “It breaks down like this: it’s legal to buy it, it’s legal to own it, and if you’re the proprietor of a hash bar, it’s legal to sell it. It’s legal to carry it, but that doesn’t really matter ’cause get a load of this, all right? If you get stopped by the cops in Amsterdam, it’s illegal for them to search you.” And that’s sort of it for Amsterdam, unless you count my hazy memories of that one time in 1983 that Doctor Who went there.

Imagine my delight to discover that first, Vincent’s summary was close to the truth; and second, that even without the cannabis clause, Amsterdam is a thoroughly lovely place that kids, adults, and Timelords alike will enjoy. The family spent three days there over the holidays, and it almost instantly won my heart, vying alongside Paris and London for the title of Coolest European City.

The first new thing I learned was that, by European standards, Amsterdam is young. The “dam” part of the name was literal: after some flooding around 1170, the locals built a dam to stem the river Amster, and promptly started charging non-locals a bridge toll to pass through. Since county dwellers were exempt from their own toll, the local population swelled until, by 1275, there were enough damn Amsters to compete with those Rotters down the road.

To Canadian readers, 1275 is still pretty ancient. The important distinction is that Amsterdam had its Golden Age later than London or Paris, as it became Europe’s trading capital towards the end of the 17th century. Add to that a second boom in the 19th century which involved a lot of industrial city planning, and you’ve got a surprisingly fresh-feeling old city. The architecture is glorious, sometimes bombastic, and the network of bridges and canals (more than 100 km worth) is breathtaking yet amazingly easy to navigate.

As with any trek that involves a five-year-old, we favoured kid-friendly destinations like the Artis Zoo – well-designed to make both humans and residents feel at home – and the Tropenmuseum – featuring a giant interactive mosaic, ie. hours of distraction. But I smuggled one day to myself, to wander around the city in the winter sunshine, and to visit the Winter Market and the Van Gogh Museum. And S and I also got Nanabee to put X to bed one night so that we could test out one of Amsterdam’s two most famous attractions: the coffeeshop culture.

For whatever reason, “coffeeshop” is code for “weed bar,” and although they do sell coffee (and munchies, of course) they should not be confused with authentic cafés. Not that you’re likely to mix them up, with the coffeeshops’ Jamaican décor, trancey music, and foggy, fragrant atmospheres. Each place is a variation on a theme: stoner-nerd, stoner-hipster, stoner-cyberpunk, etc. We settled on a chrome-plated place with TV screens built into the walls, all playing loops of random, trippy imagery while customers stared blearily out through the mists.

There are two menus: one for soft drinks and munchies (no alcohol), and the other for pot. The latter lists the names of strains, their potency, and a little blurb about their effects. We chose “Super Silver Haze,” which promised a “citrus, earthy” flavour and a “clear and creative head high.” The coffeeshops won’t grind up your bud for you, and they aren’t allowed to sell any paraphernalia (though you can buy pipes and bongs at any souvenir shop), but they’ll give you some rolling papers if you remember to ask. Then you find a booth and get your fingers sticky as you shred, sprinkle, roll, and smoke.

One of the things I love most about being a tourist is stumbling upon great experiences. If I’d done my homework, I might have known in advance that “Super Silver Haze” was the first prize winner at the High Times Cannabis Cup for three years running. Instead, I lucked out, holy fool that I am, and found myself higher than I’d been since the mid-00s. Somehow, we found our way out of the coffeeshop, and on to a boat tour which showed off the trippy, neon installations of the Amsterdam Light Festival. I’ll say this much: these artists know their audience.

The morning after, I wandered blearily around Amsterdam’s second most famous attraction: the Red Light District. Even though the fact didn’t make it into Pulp Fiction (or Doctor Who, strangely enough), most of us know that prostitution is legal in Holland. The tourist websites call them “female entertainers” or “window dwellers” because they stand or sit behind glass panels, clad in lingerie with cell phones close by to negotiate prices through the glass. The district also boasts plenty of sex shops, sex museums, live sex shows, and sex-themed bars.

By daylight, the streets were mostly quiet and still stained with trash and vomit from last night’s debauchery, but Amsterdam’s civic cleaning crew were already hard at work supporting the 650 million Euro industry. The sanitation trucks all bear Amsterdam’s city crest: three St. Andrew’s crosses on a red and black background. Never let it be said that the Dutch lack a sense of humour. 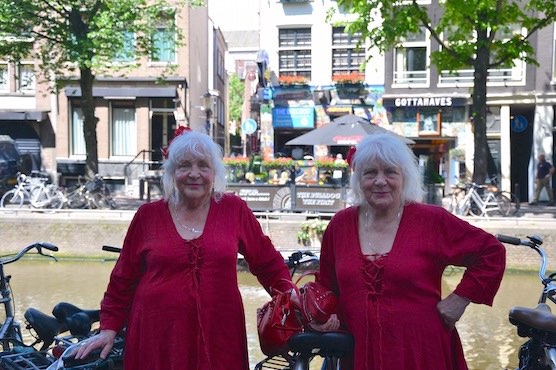 I’m mostly past my hedonistic years, so the coffeeshops and window dwellers are curiosities to me, but nothing more. I shudder to think how I would have coped with Amsterdam had I been turned loose here at 18 or even 25. All the same, it feels like a fairly safe environment to sow one’s oats. And even for those of us who have little left to sow, it’s nice to find a surprise or two in store.

P.S. I didn’t meet them personally, but I can’t resist including a salute to Amsterdam’s most famous “Old Hookers,” a pair of 74-year-old twins named Martine and Louise Fokkens. Did you read that name aloud? Gotta love the Dutch.