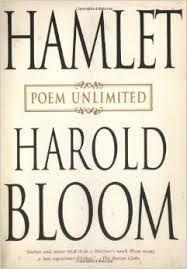 I haven’t done much scholarly sparring on this site, mostly because I’ve been too preoccupied with the practicalities of staging the play. But I’m always interested to read what the bigwigs think about Hamlet. Currently, I am inching my way through a couple of compilations and seminal works of criticism, including:

As if all that weren’t enough, I couldn’t resist picking up Harold Bloom’s Hamlet: Poem Unlimited. It’s such a slim little volume, and after struggling through Shakespeare: The Invention of the Human during my grad studies, I welcomed the opportunity to digest some weighty thoughts within a less weighty tome.

Unfortunately, I realized quickly that Bloom’s approach to Hamlet is in some ways antithetical to mine. It’s not necessarily that I think he’s wrong — although he certainly leaps to many conclusions, though he writes about them as though they were established fact — it’s more about feeling I get from reading a lot of other Shakespeare scholars: they don’t like the theatre.

Sure, Bloom would deny the accusation that he is anti-theatre, even though he sometimes snarks about how hard it is to find a decent production of the play. He celebrates the play’s self-reflexive theatricality, starting from a shaky assumption that Will Shakespeare himself played the Ghost and the First Player, and swiftly coming around to what he sees as the centrepiece of the drama: Hamlet’s advice to the players.

“At the very close,” writes Bloom, “Hamlet fears a wounded name. I suggest that his anxiety pertains not to being a belated avenger, but to obsessions as a dramatist.” Hamlet does, at one point, write a passage of verse, to insert into The Murder of Gonzago; however, the play about Hamlet is sub-titled The Prince of Denmark, not The Playwright of Denmark, and it’s sloppy of Bloom (or Shakespeare, if Bloom is correct) to lose sight of that.

Bloom writes that “in this poem unlimited of so many wonders, nothing is more central than Hamlet’s excursus on the purpose of playing.” The scholar is especially taken with the idiomatic instruction to “hold a mirror up to nature” — largely because, as he argues at length in The Invention of the Human, that’s what he believes ALL of Shakespeare’s works do for ALL humanity.

My problem with Hamlet’s advice to the players is, it’s drek. Hamlet might think of himself as the quintessential dramatist, but he’s not a professional actor, and he has no business dispensing vague advice to thespians who have been practicing their craft longer than he’s been alive. Furthermore, it’s self-contradictory, in a way that seems to make it ironic, not unlike Polonius’s “to thine own self be true” — a piece of advice which would ring a lot truer if it didn’t come at the end of a laundry list of corrective instructions.

I suppose, if Shakespeare HAD portrayed the First Player, then it becomes a clever (if convoluted) in-joke, to have Richard Burbage playing a character that uses Shakespeare’s words to instruct Shakespeare himself on how to act. But it’s not interesting to any post-Globe audience — whereas audiences can and should be riveted by the Mousetrap which follows it. So I don’t believe for a second that Hamlet’s advice to the players is “central” — it’s table-setting, mostly characterizing Hamlet’s nervous disposition prior to his gambit against Claudius.

How does this imply that Bloom hates the theatre? Well, theatre is messy, ephemeral, chaotic. Every production messes about with Shakespeare’s words and ideas in unpredictable ways. If only there were a fixed set of rules about how to act, then the messiness would go away. But I don’t believe for a second that Hamlet is designed to provide that panacea; it is the messiest of masterpieces.

In other regards, though, I agree with Bloom completely. Of Hamlet and Ophelia, he makes no attempt to justify the Prince’s monstrous cruelty towards her, instead quipping, “Shakespeare’s wisdom avoided the only fate for Ophelia that would have been more plangent than her death-in-water: marriage to Hamlet the Dane.” I dig that, Harry.