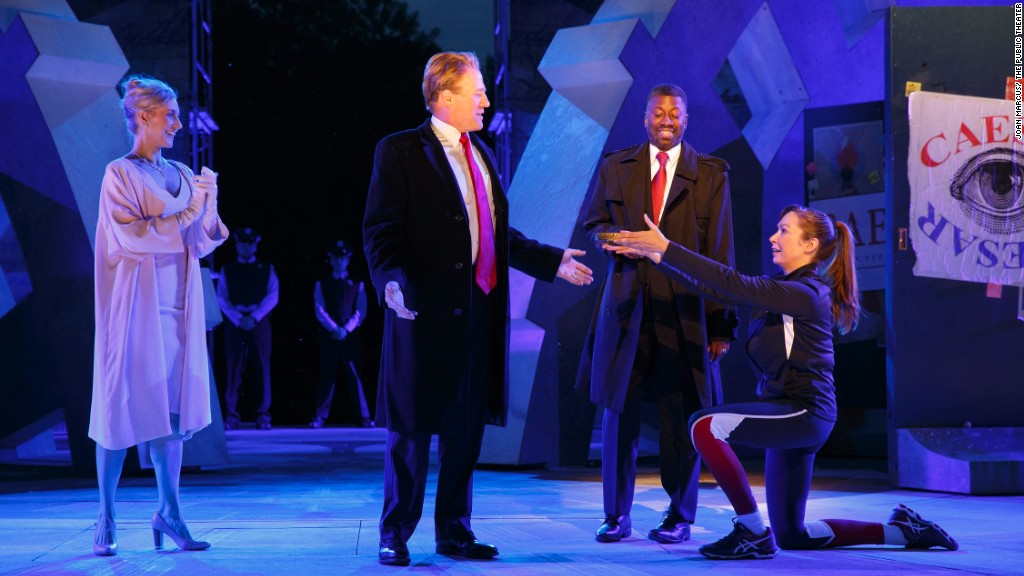 For the second time since the election, Donald Trump has butted antlers with the professional theatre industry. I guess it’s not that surprising; after all, he seems hard-wired to antagonize everyone within his reach, and thanks to Twitter and the U.S. Presidency (in that order), his reach is vast. Still, it’s disorienting to have worked for so in an industry that’s essentially invisible to political movers-and-shakers, and then suddenly to see it thrust into the spotlight, as it were.

The first theatrical throwdown was with the Broadway cast of Hamilton, who offered a humble and heartfelt post-show appeal to the incoming VP, Mike Pence. Trump’s feathers were ruffled; how dare these mummers break character and wreck an evening of leisure by making a musical about U.S. history into some political statement? Trump’s paranoia was only starting to show at that point, but between that outburst, and his near-constant outrage at media criticism, it quickly became obvious that the 45th POTUS doesn’t like it when anybody besides himself has access to a microphone.

Was that really only seven months ago? It feels like we’ve been on this shaky, nauseating carnival ride for decades. Half a year of Trump as president is barely enough time for filmmakers, musicians, or visual artists to make sense of the nightmare, which is why we’re still mostly clinging to serendipitous bits of cultural protest – like Hulu’s The Handmaid’s Tale, a TV show based on a 32-year-old novel that seems uncanny in its currency. Even in a year (or two, or four, or – god help us all – eight), don’t expect a lot of blistering anti-Trump material to emerge from Hollywood. Big industries are slow to respond, but mostly they’re just craven.

But seven months is more than enough time to produce a Julius Caesar with orange wigs and long ties. I’m guessing the NYC Public Theater (I’ll spell their name the American way out of respect for their cause) already had plans to produce JC this summer, and it was their good luck (and the rest of the world’s bad) that the election handed them an aspiring tyrant. I say “good luck” because even though they’ve lost major sponsors, received death threats, and suffered onstage protests, they are the hottest ticket in town since, well, Hamilton.

In a patiently-worded press statement, the Public Theater insists that their production “in no way advocates violence towards anyone” because “Shakespeare’s play, and [their] production, make the opposite point: those who attempt to defend democracy by undemocratic means pay a terrible price and destroy the very thing they are fighting to save.” English professors like Sarah Neville go one step further, pointing out all the unstable and ambiguous imagery in “Shakespeare’s slipperiest political text,” and reminding us “that human beings are notoriously bad at reading symbolism.” 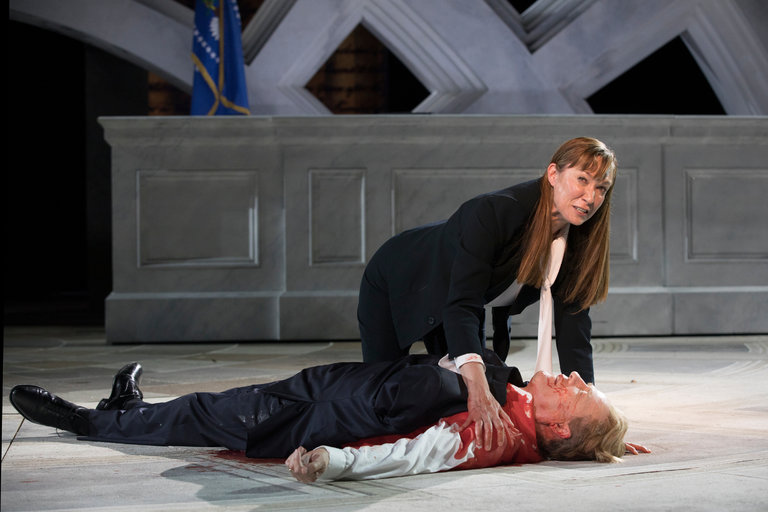 Neville claims to be baffled that conservatives are failing to embrace the complex subjectivity of the play. She knows the script, but she’s forgotten the point: theatre has almost never been about words and themes so much as bodies and optics. This production features a Trump lookalike who is brutally assassinated – that’s current affairs. Everything else is ancient history.

The crux of the controversy is a strained coincidence of timing: On June 14, Republican US Congressman Steve Scalise was shot during a baseball game, and Donald Trump, Jr. retweeted a commentator’s tweet linking the violence to Caesar. So I’ll concede: it wasn’t Trump himself ranting this time, merely a member of his dynasty. Every generation, when faced with violence, finds a scapegoat in the media: films, video games, comic books. I find it sort of quaint that the spotlight has swung back onto a medium (ie. theatre) which once so terrified monarchs that all of Shakespeare’s plays had to be approved, or else heavily redacted, by a royal censor.

Assuming none of the protesters do anything foolish, I expect this business will blow over with no lasting harm to Trump, or Twitter, or Shakespeare. But for now, it’s yet another sign that the alt-right administration shepherding Trump through his term reacts to criticism as fascists always do: by seeking silence. Totalitarian leaders reward flattering reflections of themselves, but which Shakespearean play could possibly cast Trump in a good light? If the Public Theater doesn’t produce King Lear next year, I’ll do it for them.

In the end, theatre is the one medium that tyrants can’t control, because all the world’s a stage. Read this public Facebook post by Samantha Rehr, a woman who attended Julius Caesar sometime after the controversy began, and as you read it, imagine yourself there, and try to separate the (rehearsed, artistic) theatre from the (spontaneous, political) show:

I have to describe what happened tonight at Shakespeare in the Park. The play starts. Julius Caesar is Trump. We know that already. Enter stage left from the audience a young woman dressed all in black protesting Caesar. Cool. About thirty minutes in, Caesar is brutally stabbed to death over and over by the senators. It’s really graphic and disturbing. Enter stage right from the audience a young woman dressed all in black yelling at the senators and the audience “Stop violence against conservatives!” Slowly the crowd realizes she isn’t an actor like the first woman, she’s a real protestor. A man stands up in his seat and starts yelling at the crowd, and now the audience is booing and hissing and people are standing up out of their seats to yell at the protestors (someone near me yells, “I hope you didn’t wait all morning for this!”), and the stage manager comes on the god mic to pause the show, and security come on stage to drag the woman off. The commotion settles, and the SM comes on again and announces, “actors, pick up from ‘Liberty! Freedom!'” (that was literally the line) and the crowd goes wild. Standing ovation. The scene picks up and ends, and the real police, in full regalia with bullet proof vests, cross back into the theater in front of the stage as the senators exit the stage through the audience and have to weave around the police, as actors dressed as police in riot gear enter the stage (I can’t even describe how wild this image was), and the scene shifts to Brutus’s speech to the Romans, during which a dozen planted actors throughout the theater jump out of their seats and begin yelling at the stage, and audience members, now not knowing what to believe begin heckling the “protestors” again! Madness! Long live art imitating life imitating art imitating life.