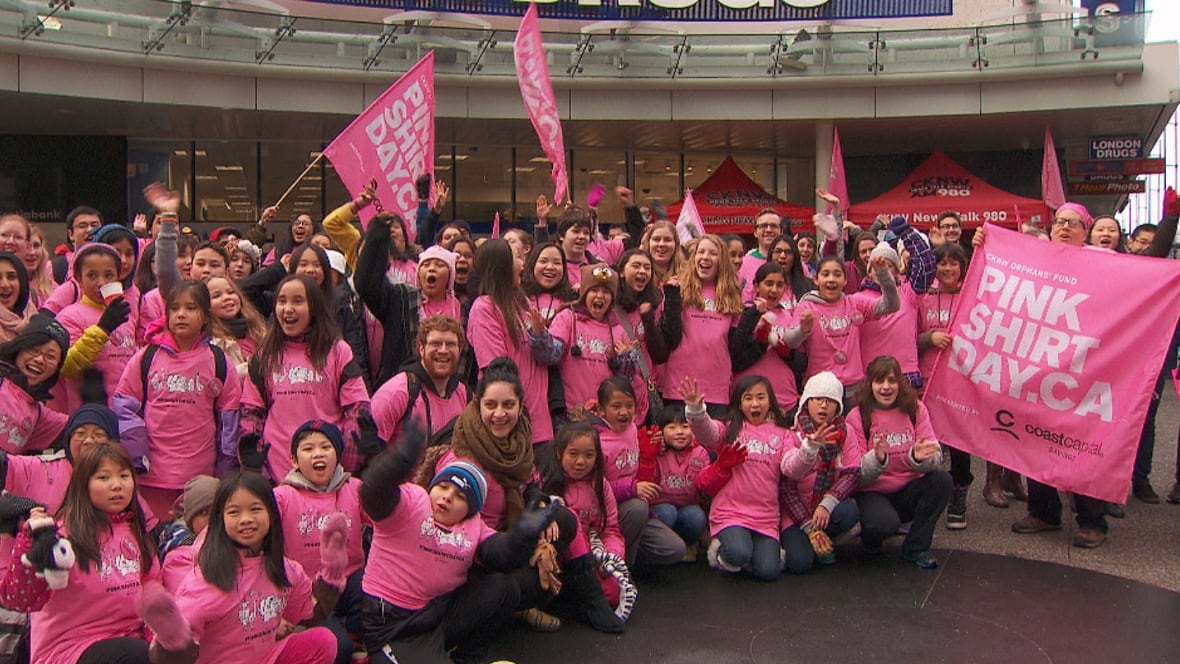 I’m standing in the middle of a school playground on a scorching hot day. There’s no shade anywhere. All around me, children of various sizes are hurling their awkward young bodies around – up and down the slide, all across the monkey bars, over and around a series of stumps that form a perimeter separating the gravel from the grass. Most of them are wearing pink, which makes the scene surreal. It’s like watching a batch of cotton candy in a blender, if cotton candy could shriek with a hundred voices at once.

Today is La Journée Rose, a day when kids wear pink to take a stand against bullying. I have a lot of confusion about it, though I’ve mostly kept it to myself. According to the Pink Shirt Day website, we’re supposed to crack out the coral on February 28. But The International Day of Pink says no, break out the blush on April 12. The Erase Bullying site claims February 22 is the proper day to show the salmon. None of these coincide with today, a day in the middle of Week Two of my child’s Grade 1 experience.

I guess I’d be happy if every day were an anti-bullying day, except then it would lose all meaning. I’m not sure it means much to these primary kids, besides a BBQ lunch with some parental cameos. And it means nothing to my daughter, who wears pink to school nearly every day anyhow. Except P actually resisted wearing pink today, because she is perverse and stubborn and when her parents tell her she’s expected to do something she will do the opposite. I basically had to bully her into wearing an anti-bullying dress.

I drive out to the BBQ lunch, losing valuable course prep time, because I hope this will be a good chance to observe P in her new natural habitat. The playground is where kids get to be kids, uncensored and unrestrained. I volunteer to stand in line for her in order to procure a hot dog, but instead of running to join the other pink blobs in motion, she scurries indoors to find her water bottle. By the time she comes out, her friend M has materialized – M, who is four years older than P and doesn’t even go to this school, but for some reason he’s here today. The two of them race off to a distant soccer goalpost to engage in some intense, one-on-one fantasy role-playing. It’s not what I came to see.

P has been back at school less than two weeks, and bullying is already a daily topic of conversation. On Day 3 or 4, she told me that three “older kids” have been “attacking her.” On Day 5, following my instructions, she complained to the principal, who (according to P, whose reports are always heavily salted) told the bullies a report would be sent home to their parents “if they did it two more times.”

Wait, what? Two more times? I’m glad there are some open lines of communication here, but shouldn’t the policy on bullying be a little bit more, I dunno, zero tolerance? The pink shirts seem like a lavendar smokescreen, distracting and placating parents from the disinterested truth. Carnation camouflage.

I wrote a note about this to P’s teacher, but she wasn’t able to meet until after La Journée Rose. I spend my allotted hour on the playground chasing after P, and trying to seem innocent as I ask her to point out other kids. “Are any of these your friends?” I ask, pulling her out of her fantasy world and into the rude reality of social dynamics. She relents at one point, indicating one of the tiny pink bullets zipping around the stumps. “That’s Lucy,” She tells me. “She’s a friend.”

“Can you introduce me?” I ask. But by then, P is already back in her game with M, and Lucy has already sped over to join a group of parents sitting on the grass. I weigh my options. I could walk over and introduce myself – but without P along, wouldn’t that be weird? I want to help strengthen P’s bond with other kids, but I realize I really have nothing to say beyond, “I’m P’s dad.” Even complimenting Lucy on her choice of shirt seems like a misstep, since she probably had no choice about wearing it today.

So I go back to bugging P, until finally, unexpectedly, I hit paydirt. She points to a boy in the sandbox. “That’s one of the kids who’s been attacking me,” She says. No hint of trepidation in her voice; it’s just a fact.

I stare at the kid. He is in Grade 2, or 3 at the most. Not much bigger than P, although he’s stocky. A pee-wee hockey player? He’s wearing an Under Armour t-shirt, and yes it’s pink, or at least fuschia. But the way he belligerently dumps his complimentary apple juice bottle into the sand… it’s mean. He wears a pink shell, but inside he’s all bully. Rotten to the core – I can tell.

It’s time to get back to work. I hug P goodbye, and as I’m about to leave, she utters a cryptic warning: “The next thing my teacher tells you is false.” I pry more information out of her. “She’s going to tell you that I hit some kids, but I didn’t hit anyone this time. I only took their ball.”

One of the nice things about administering justice to children: they usually rush to incriminate themselves. “What do you mean, this time?” I ask, keeping my voice neutral. “Does that mean you hit kids at other times?”

The next day, a meeting with P’s teacher confirms all this. In fact, it turns out that none of the supervisors have seen any instances of P as the victim of violence at all – only the instigator. “Bright children like her, they get bored sometimes at recess,” She explains, and we work out a plan to equip P with a notebook and pencil so she has something to do on the playground besides harass other kids. And hopefully, something to do at home besides lie about being bullied.

Except the ridiculous, exasperating truth of it is, I don’t think she was lying. She believes that the older kids bullied her – even if she physically struck the first blow. Because – and here is the sick, sad irony of La Journée Rose – everybody is anti-bullying, because nobody thinks of themselves as a bully. Dress them all in pink, and you’ve erased all barriers between the bullies and the bullied – but maybe those barriers were never there to start with. That’s the magenta mindfuck.