I am sitting in a studio apartment overlooking the Mira River, that broad stripe of blue that loops about the soul of every native-born Cape Bretoner, crooning like a homing beacon whenever they’re Away. The sun is going down, adding a subtle swath of lavender above the treeline. I don’t go out for vistas very often, but I have to admit, this one’s a keeper.

The apartment belongs to friends who have offered it up this weekend for a mini-writing retreat. S. suggested the retreat last week, probably because I was starting to whinge about the lack of writing time I anticipate between now and June 1, when I return to the Fortress of Louisbourg for a second summer of pseudo-soldiery. Most likely, S. decided that solo parenting for a weekend was less burdensome than putting up with my angst. But even if her motives were selfish, I still owe her one.

The project is Good Animals, a play I started writing just over a year ago with no intention of ever developing or producing. It was a freebie project, a short, silly scene written on borrowed time, a kind of weird revenge against the fates which had conspired to steal most of my writing time away from me while on sabbatical. But that’s the way of creative projects, I suppose; sometimes the big, breakthrough novel gets abandoned halfway, and the random throwaway stuff takes centre stage.

Good Animals started as a series of disconnected scenes about animals dealing with human-like problems. I wrote two in France — the first, about a pair of lungfish in a dysfunctional relationship, and the second, about prehistoric beasts doing the “cave art” circuit — then brainstormed premises for a bunch more in order to apply for some subsistence funding. Unexpectedly, I received not one grant but two — the second was an educational outreach project, taking the scenes into high schools. Which was cool, except first I had to write them.

That was Fall 2017, and before the year’s end I actually managed to write all the scenes I’d planned, plus one bonus scene that snuck into the mix. This weekend’s retreat, then, is for revising — because even in the four months since I completed Draft 1, I feel like a lot has changed.

First, as you know if you’ve been reading my sporadic 2018 posts, I’ve grown preoccupied with climate change — and by “preoccupied” I mean “deeply, spiritually depressed.” In December, I cheerfully checked out half a dozen books on the subject, hoping to cram in some research for the final scene of Good Animals, which I’d always intended as a climate change commentary. But I don’t think I’d really grappled with the implications of that choice; it felt like the right note to end on, because GA is a play about nature, and climate change threatens all of nature, so I was a good little progressive playwright by acknowledging that.

But the topic wasn’t content to relegate itself to a post-script. One semi-serious scene, coming at the end of seven mostly screwball comedies, made the subject into a very poor punchline. Still, I did the best I could with it (it’s about a polar bear who swallows a Google Home device), and my dramaturge says it’s one of his two favourite scenes, so I guess I at least partially did justice to the theme. But I knew as soon as I was done Draft One that my eleventh-hour research was going to filter back into the rest of the play.

How do you write a play about climate change? I’m far from the only person to tackle that question. Nicholas Billon won the 2013 Governor-General’s Award for Fault Lines, three short plays that touch on environmental themes but mostly use them as metaphors for breakdowns in human relationships. More ambitious is Colleen Murphy’s Breathing Hole, which premiered at Stratford last summer and which also features a polar bear (though as far as I know, she doesn’t eat a Google Home). And in between, plenty of other Canadian (and international) playwrights have faced the carbon-based writing on the wall — enough that Howlround.com has an ongoing series of articles about “Theatre in the Age of Climate Change.”

I haven’t done anything resembling a comprehensive survey, but I expect the efforts fall mostly into two camps: the “how we got here” camp and the “where we go from here” camp. And I bet there are more of the former than the latter. It is not a strength of my medium to hand out answers. Playwrights can delve into complex problems, maybe more effectively than screenwriters or even novelists; but telling an audience how to fix those problems starts to smack of agit-prop theatre, and who wants to be preached to?

Those thoughts were almost enough to make me shelve Good Animals for good. But luckily, I had another obligation first: 10 high school students at Sydney Academy had already signed up to work on a handful of the scenes. I picked four mostly goofball scenes — no polar bears for the kids — and I re-dubbed the project Natural Selections, mostly to differentiate in my own mind. We rehearsed the scenes between January and early April, then gave them one performance as part of the Boardmore Youth Festival.

The students were great, and I had a fairly strong support team courtesy of a couple of CBU students plus S’s Stagecraft class. But a long string of snow days and illnesses hobbled our rehearsal process, preventing me from doing as much with the scenes as I’d hoped. Many lines were dropped, and in one scene, everybody forgot their lines, leading to the sort of interminable, awkward stage silence that forms the very marrow of thespian nightmares. But in a sadistic sort of way, it was great script feedback for me. If the kids dropped a line and nobody noticed, that told me that the line isn’t important. And when the kids completely fell down, I listened carefully to see what lines they used to pull themselves back up again; those lines are important, and worth keeping. 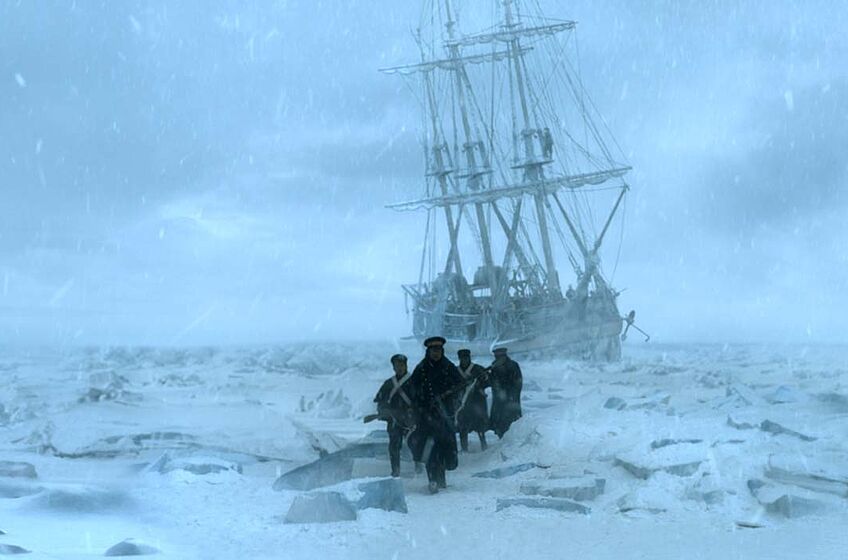 But throughout the whole process, and especially now that it’s over, I have elt as if a polar bear were stalking me. Not, thank God, the demon-spirit sort of polar bear that’s stalking the crew of the Franklin Expedition’s two ships in AMC’s miniseries The Terror (Have you seen it? Sweet Stiff Upper Lip, it’s good television). My more benevolent polar bear is named Grace. She is patient, but she won’t wait forever. And all the fun & games I’ve been having with lungfish and mammoths and guinea pigs is just a prologue to her story.

How do you write a play about climate change? In my case, you stick to your guns and tell the story of life, from the time our ancestors stumbled up out of the brine to the brink of our extinction. And I still want it to be silly and fun, but now I’m concentrating on giving the characters more depth and sympathy, so that their presence lingers even after their respective scenes are done. Then Grace won’t be carrying the weight of the whole world on her shoulders at the end of the play; hopefully, I’ll find a way to make the theme feel retroactively relevant to all the animals.

That’s the challenge. It isn’t going to get solved this weekend. But it’s nice to have the time — and the view — to help me hatch my next scheme.