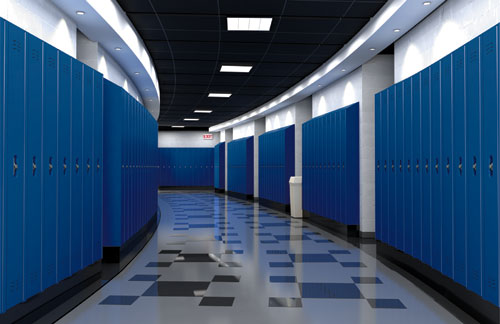 Last night I dreamed I was back in high school. I had only been gone for the course of a single long weekend, but I had forgotten my locker combination, and even which locker was mine. When I finally got the numbers from the office staff, I opened up my locker to discover that it actually led to an entire room, with a bed and shower, along with many stacks of boxes. The boxes contained old cassette tapes which I’d used to record mixtape highlights of all my favourite albums.

Bored yet? Other people’s dreams are rarely as interesting as our own. Like most dreams, this one really goes nowhere slow; I vaguely recall some sort of conflict at the end – maybe because some other students had been using my “locker room” for themselves – but if there were any truly bizarre details, I forgot them promptly after waking. In fact, I probably would’ve forgotten the entire dream if I hadn’t happened to mention it to S.

I used to be preoccupied with my own dreams, and especially with the concept of lucid dreaming: the awareness that one is within a dream, and therefore partly in control of how the dream unfolds. I played lucid dream training tapes before falling asleep, and I kept a dream journal beside my bed, so that I could increase my dream recall (because there’s no point in having awesome lucid dreams if you don’t remember them). I don’t think I kept any of those journals, but I’m sure they were jam-packed with gibberish; writing anything when you are half-awake is an exercise in futility.

The experiment was marginally successful. I had a handful of dreams in which I gained awareness, sometimes through textbook methods like checking a clock or flipping a light switch (neither work in dreams), but just as often through happenstance: something dreamlike occurs (as it does), and I would go, “Hmm, I must be dreaming” (as one usually doesn’t).

But once I became lucid, there wasn’t as much to do as I’d imagined. I might fly around for a bit, or fold myself flat, or spin like the Tasmanian Devil – a trick that serves to “erase” one’s dream landscape and create another, with an effect not unlike teleportation. The strangest thing about these miraculous acts was that, even though I was lucid, they didn’t feel that strange. I had gained control within the dream, but knowing it was a dream somehow undermined the sense of wonder you’re supposed to feel when flying, or folding, or teleporting. So I gave up the quest for lucid dreams and concentrated on my waking life instead.

But every once in a while, I check in to see what my dreams are up to. It’s disappointing and a bit exasperating to discover that not much has changed. My unconscious mind isn’t quite on repeat, but it does go back to the same wells over and over again. Take locations, for example. The dream I mentioned above was set in my high school – sort of. It didn’t actually look like my actual high school, but when one part of my mind called up a corridor filled with lockers, another cerebral fold decided “close enough,” and told me I was in high school. In fact, my brain is so good at this that 90% of the dreams I can recall are “set” in one of maybe four locations: high school, the house where I grew up, the Unitarian Church of Edmonton, and the video store I worked at for longer than I should have. My Greatest Hits.

Then there’s the “plot” of my dream, which involved trying to find my locker and its combination. I’m not a neuroscientist, but I feel like there are humdrum explanations for the “lost information” motif, too. Maybe my critical mind takes note of the discrepancies between “actual high school” and “phantasmal high school,” and starts searching for an object (or place, or person) that can reconcile them. Or maybe I arrive at a detail which my unconscious mind just isn’t capable of conjuring – like watch displays, or light levels, or locker combinations – and so the dream’s narrative automatically adjusts to make this the “missing, must-have” plot detail. My dreams have more dumb MacGuffins than a superhero movie.

If they retain coherency for long enough, my dreams invariably end up being about repetitive performance: usually sorting something (like those mixtapes from my youth), but also sometimes building, cleaning, gathering things. You know, the sorts of chores we shun in waking life. If it’s a nightmare (which I get very rarely, thank Morpheus), then the repetitive act involves squashing spiders or scaling post-apocalyptic rubble to escape zombies. Somehow, this also ends up feeling like a chore.

This is self-awareness of a different sort. My unconscious mind has reached “dream bedrock,” and grabs a random metaphor to cover up the fact that it is now just doing what dreams are designed to do: file away the thoughts you’ve had all day. Those mixtapes were all the student meetings I’d had the day before. The hairy, hissing spiders are the faces of the people I saw in Sobey’s. The rubble is what I had for lunch.

It sounds like I’m disillusioned with the whole idea of dreaming, which would make me a curmudgeon of a very high order. I still enjoy dreaming, but more the way a film critic enjoys Ed Wood movies. Post-lucid dreaming, I feel like I understand more of the hidden infrastructure behind dreams. Like I spent just enough time on film sets to know how the crew is always moving behind the scenes, and all the movies I watch are so badly made, it’s entertaining.

Or entertaining to me, at least.