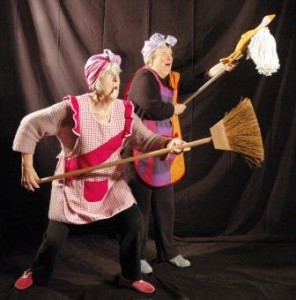 Marcellus and Horatio from Aperitivo’s Hamletarama, which also features 5 Hamlets, 3 Ophelias (Opheliae?), and a cat.

BARNARDO: I have seen nothing.

Here, we get our first real scholarly (and producerly) crux. Line 20 — the one where Shakespeare uses “thing” as the ultimate deferral of exposition — is attributed to Marcellus in the First Quarto and the First Folio, but in Q2, Horatio speaks this line. To whom should the line go in a modern edited version of Hamlet? Who should speak it onstage?

It’s high time I gave neophytes an overview of the Three Faces of Hamlet. The play was published twice in Shakespeare’s lifetime — 1603 and 1604 — and then again in 1623, shortly after his death. All three are quite different, giving scholars lots to argue about. Part of the argument involves the relative authority of each version — and here, “authority” has an emphasis on “author,” since it usually comes down to which text is closest to Shakespeare’s original manuscript — which is probably hiding in an attic somewhere in Connecticut, but until they find it, the whirligig of scholarship continues.

For most of the twentieth century, the 1603 version (called the First Quarto after its publishing format) was considered corrupt, probably a plagiarized copy based on one actor’s memory, or else scribbled down by someone in the audience. It’s shorter, rougher, and less philosophical than the other versions, plus some changes are just weird, like Polonius becoming Corambis. Recent scholarship has challenged Q1’s status as the “Bad Quarto,” but it still doesn’t get much love in either published editions or live productions.

The Second Quarto seems to have been published in order to replace the First — or to recoup losses from a pirated edition, because its title page boasts that Q2 is “Newly imprinted and enlarged to almost as much againe as it was, according to the true and perfect coppie.” Many scholars take this boast to heart, and conclude that Q2 is closest to Shakespeare’s hand (despite the use of the word coppie there). It also happens to be the longest version, although there are some significant bits from the Folio that don’t make it into Q2.

The First Folio was the first Complete Works of Shakespeare, published after his death by colleagues from Shakespeare’s theatre career who presumably had access to good copies of the plays. So the changes from Q2 to F might have been rewrites by the author, or possibly changes made by performers while on tour, or after Shakespeare retired, or maybe there was some censorship, or possibly time-travelers were involved, or…

Chasing authority in Shakespearean texts is like cloud-watching with a Danish Prince, so let’s abandon that shell game for now, and make the hard choice about 1.1.20. Does “What, has this thing appeared again tonight?” sound like something Marcellus would ask Barnardo — one soldier to another, demanding status reports on the ghost-ridden battlements? Or does it sound like the question posed by a visiting scholar who’s been briefed?

The current Arden edition of Hamlet prefers the Second Quarto, so it gives the line to Horatio. In a note, the editors (Ann Thompson and Neil Taylor) quote Russ MacDonald to defend their choice: “Better, I think; for the tone is scoffing, and Horatio is the incredulous one who has not seen [the ghost].”

Yes, the word “thing,” while not exactly scholarly, could come from Horatio’s mouth with a sneer. But it could also be murmured from between a soldier’s trembling lips. Marcellus was the one who invited Horatio, so he’s not being secretive by using the word “thing” instead of “ghost.” But by the same token, Marcellus brought the scholar here precisely to figure out what sort of thing it is. The word also serves as a concise and ominous shorthand when passed from one soldier to another; though one step less oblique than “Not a mouse stirring,” it still has a conspiratorial aura, like when the Sopranos talk about “goin’ to see the guy about the thing.”

For a producer or director of Hamlet, the choice depends on tone. If the goal is to add to the scene’s mystery and excitement, Marcellus has the best chance of re-invoking it here (following the dip in tension when two new faces entered the stage). But give it to Horatio if you prefer a lighter-hearted scene, or if you want to throw more light upon Horatio’s skepticism, or to contrast more strongly with the “fear and wonder” that will harrow him in 20 lines or so.

If I were keeping 1.1 in my production (I’m not), I’d go with Marcellus. Both of those secondary reasons are valid, but I love ratching up the tension when I can. Besides, Horatio has more lines than Marcellus; throw the little guy a bone.

There, that’s one crux down. Before we leave these lines, let’s all give an eye-roll to Barnardo, whose response, “I have seen nothing,” is based on his having been there for maybe ten seconds, tops. A comic Hamlet would have him write down Francisco’s “Not a mouse stirring,” and then read it back to Marcellus and Horatio, in lieu of his own line. Ah, you crazy sentinels. Tom Stoppard oughtta write a play about you guys.