It has been many months since I left you, and all those whom I love in France, to accept my position with the Companies Franches de la Marine. The rigorous demands of the work have prevented me from writing to you earlier… besides, of course, the fact that I, like most of my fellow commoners, cannot read or write. By good hap, a cannoneer took pity on me and allowed me to dictate my thoughts to him. Merci, Le Breton.

In many respects, the colony of Ile Royale, and the fortress which squats upon its windiest protrusion, corresponds precisely to my expectations. The work is hard, with long shifts and much time spent out-of-doors and on the move. My uniform, while flattering, is a weighty stack of wool and brass that instantly evokes a sheepdog when brought into contact with moisture. And moisture is ubiquitous here, as the oceanic winds drive the town’s humidity beyond measure. Even on occasions when the Fortress is not choked with fog, I still often feel as if I am swimming through my days.

Nor is that the only dreamlike quality of Louisbourg. Thibaut, I was unsure if I should share with you my observations on this next subject, as I feared you might conclude I had left all of my wits in France. In an epoch such as ours – in a year as modern and progressive as 1744 – the tales I am to tell seem credulous; illogical; the yarns spun by spinsters, not young(ish) soldiers such as yours truly. Yet spin them I must, for if I cannot share the most astonishing aspects of my vocation with someone like yourself – someone who knows me, whom I trust – then I may well go mad indeed.

There are ghosts here. Perhaps that is not astonishing of itself, for despite the colony being a mere 30 years old, it has by now seen more than its share of misery and death. No, the shocking aspect – one of them, at least – is the sheer number of phantasmagoria. On many days (particularly sunny days or weekends I have noticed), they outnumber both the soldiers and the citizens of Louisbourg. Unlike traditional spectres, they seem most populous in high daylight, thinning out as each day wanes. I am not certain, but I suspect they all depart at night. 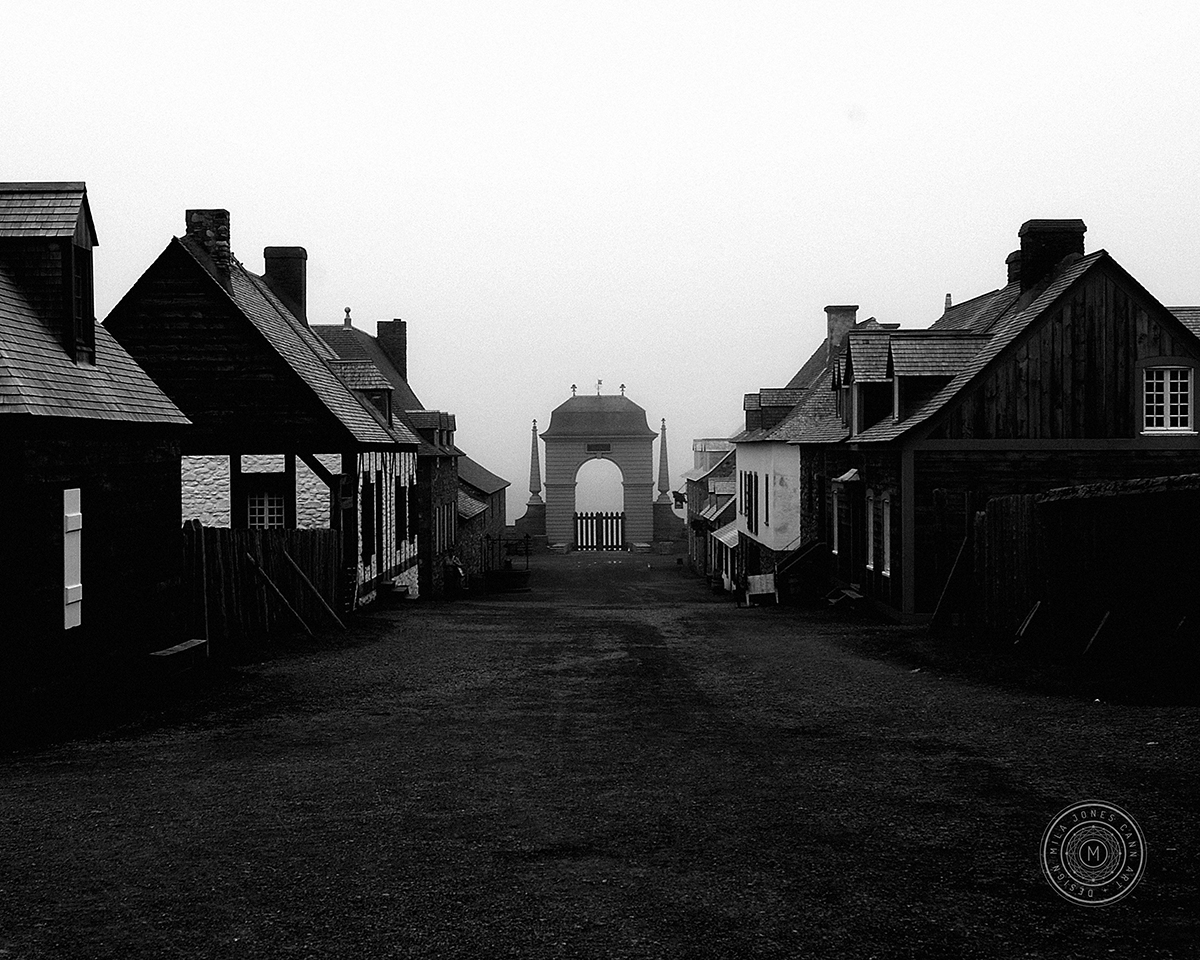 And how bizarre they are, even for ghosts! They are, to a man, strangely attired, as if they have just stepped (or drifted) off a ship from the Far East, or the Africs, or… I cannot guess. Many of them lack the most basic elements of decent apparel: instead of shoes, they wear soft flat planks strapped ’round their toes, leaving their ankles exposed – yes, even the she-ghosts! A great many of them sport dark spectacles, which (no doubt) conceal horrific, death’s-head eye sockets, or worse. And a bewildering number wear vests or hats emblazoned with images of blue jays.

After a few harrowing encounters, I steeled my mettle and confronted my sergeant about the hauntings. I was expecting to get laughed out of the fortress, or at the very least thrown up onto the wooden horse for attempting to crack wise. But, to my shock, the sergeant evinced no surprise whatsoever. And stranger still, he counselled me to treat the spooks as if they were honoured guests at Louisbourg. “Why is this?” I demanded, further risking punishment for my impertinence. “Should we not send instead to Quebec for an exorcist, post-haste?”

“Just answer their questions and make them feel welcome,” Was the sergeant’s inexplicable reply.

How, Thibaut, does one help the restless dead to feel at home? As it turns out, the task, blasphemous though it may be, is simple. Whosomever these ghosts may be, they already seem quite cozy in the fortress. Instead of rattling chains and howling for revenge as one might think, they insouciantly roam from building to building, smiling and pointing at the most mundane of objects as though they were priceless works of art. Often, they will surround me and raise boxes to their brows; sometimes a flash of lightning will emerge from behind a glass eye; but once I overcame my initial terror and learned to fake a smile, they seem immensely satisfied and wander off again.

They ask many questions, but they are not at all the lines of inquiry one might expect. Instead of “How did I die?” or “Why have I not met salvation?” most of the curious wraiths ask “How many men sleep in each bed?” or “How far can your cannons shoot?” or even, implausibly, “Where’s the nearest washroom?” Others inquire into my personal life, and seem both shocked and delighted when I tell them that I work long hours, get paid a pittance, and face corporal punishment for even the mildest of crimes.

A few spirits appear to be deaf, or else just dim: when I am asked, for example, where I live, I will earnestly point out my barracks at the top of the hill. “No, I mean where do you really live?” They may persist, in which case I will clarify: “I came from France, like all my fellows here.” If they continue to press their case – “No, come on. Where do you really live?” – then I am faced with an impossible dilemma: do I risk incensing a ghost, or disobeying my sergeant? In such cases, I find a white lie will suffice to satisfy them: “I live elsewhere on the island,” I’ll say, as if there were other habitable spots on this miserable rock.

The most unsettling encounters are those wherein the phantoms seem to peer into the future. If I am to interpret their delphic ramblings, I am given to believe that our days in Louisbourg are numbered… that the French will somehow, inexplicably, fall to the English here, not once but twice… and yet somehow, paradoxically and in spite of these devastating defeats, the Fortress will ultimately rise again, and last for centuries to come. Quite a puzzle, indeed! I would judge it mere nonsense, where it not for the consistency with which these prophecies occur.

Though I am but a private here – the lowest of the low – I decided to act upon the information granted to me from the great beyond, and diligently – with the help of the aforementioned Le Breton and others – assembled a “future history,” if you will. Once recorded, I thought, this destiny could be anticipated and avoided! Yet, when I brought my findings to the sergeant, he betrayed no indication that he, or anyone in power, would act to hinder the British in their march to victory. Instead, he commended me for my diligence and then sent me to go teach drills to six-year-olds with wooden muskets.

“But… what about the warnings?” I pressed, desperate. “If we don’t listen to these ghosts, will we not all be doomed to join them?”

“Just answer their questions and make them feel welcome,” Came the familiar refrain, this time with a hint of weariness.

And so I do, resigned as I am to a fate I cannot change. At least, Thibaut, on your side of the sea, you are safe. Nothing ever changes in France, of that much we can rest assured. The sun will rise and set; the peasants will sweat beneath the yoke; and the King will frolic in Versailles until the end of time. It would take a revolution to change it, and we all know that will never happen, don’t we?

Yours amidst the shades,
Jean-Francois Chaperone

P.S. Send beer. The swill they offer here is scarcely worthy of the name.