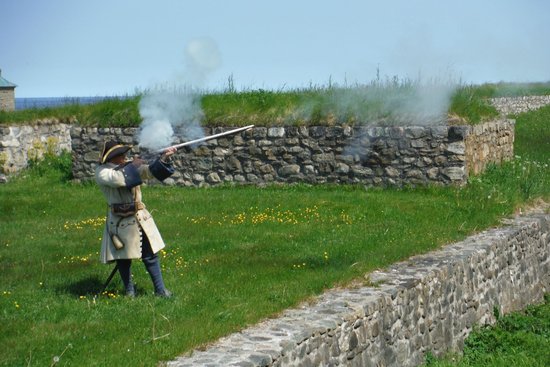 My second day on the job at the Fortress, I received my costume and gear. A reproduction French marine’s uniform is all linen and wool and brass buttons, and is worth at least half of what I expect to get paid this summer. But I was spared any lectures about respecting my stuff until my supervisor took me to the musket locker. The air grew heavy, and all at once every forthcoming jocular comment from visitors about how “I basically get to play dress-up all summer” ran off me like eau from a canard.

It was time to get my gun.

I am not, in theory, a fan of firearms. And in practice, I’d only ever fired one actual rifle, an extremely hazy memory from my childhood summers at my grandparents’ cottage near Pigeon Lake. But I understood the importance of gun safety, even when the gun was primarily a prop.

My supe handed me an eight-pound musket. “The number’s on the lockplate,” He said, then helpfully pointed out where the lockplate could be found. “Remember your number. Don’t get your guns mixed up. What’s your number?”

He walked me through the basics of loading and firing – not because he expected me to be doing that any time soon, but because visitors ask a lot of questions about the gun. “You flip open the frizzen to expose the pan. Black powder goes in the pan – they’d use a powder horn, we use some of the powder from the cartridge instead. Then you close the frizzen, but make sure the hammer’s on safety. Then the rest of the cartridge powder goes into the barrel, followed by the ball if there is one, which there won’t be. Then you use the ramrod to pack down the powder. Then it’s aim, pull the cock all the way back, and fire. What number is your musket again?”

“Uh… 10.” I replied, my head spinning. As is often the case in Louisbourg, I was being given two sets of facts simultaneously: one for historical interpretation, the other for actual practice. At the same time, I was becoming acutely aware that these muskets were not merely props – they did fire. And sooner or later, the guy pulling the trigger would be me.

Other gun facts I learned that day: 18th century smooth-bore muskets are far less accurate than rifles; they were (and are) also very finicky weapons which can misfire in numerous ways; so keep your lock, stock, and barrel in good order, and check your flint daily to ensure it sparks well.

An hour later, I was posted in the barracks, and I decided to clean my musket. Not only is that expected of us (my supe explained how to do that, too, but I’ll save you the summary), but it’s a nice activity to be engaged in, for when visitors happen upon me. I’d worked my oilcloth all the way up the barrel to the lockplate when I looked down in horror to see the number “29” inscribed upon it. It took me one hour to lose my gun.

Luckily, Musket Number 10 was right behind me; someone else had left their gun in the barracks, and I’d simply grabbed the wrong one. In the five seconds before I’d discovered this, I’d managed to convince myself that I was the victim of an initiation-style practical joke. Why else would my supe have been so emphatic about the number?

A month later, I no longer think any such prank would ever have been pulled by anyone at Louisbourg. We take our munitions seriously here. Black powder is locked up tight, and soldiers who participate in musket demos receive their cartridges mere moments before the march begins – and only once they’ve already stocked up on safety goggles and earplugs. The very fact that we’re wearing modern safety devices goes to show how big a deal this is. At any other point in my work day, I’d get chided if I so much as acknowledge the existence of a cell phones.

Musket drills are one of two activities we do that involve actual the firing of muskets. The other one – a one-person “Life of a Solider” speech which ends with a bang – seemed less intimidating to me, mostly because it didn’t involve marching in unison or responding to orders barked in French. I was expecting I’d end up doing the speak-n-shoot first, but it turns out they save it for their more experienced soldiers because it also sometimes involves supervising visitors who have paid to fire a musket themselves.

So it was to be the drill for me. I got the chance to fire independently twice before marching in my first public demo, and both times I had problems. Once, my flint didn’t seem to be properly aligned, and I couldn’t get a spark. The second time I had a “flash in the pan” — only my priming charge ignited, but my main charge didn’t catch. When you have a misfire, you have to keep the gun raised until your supervisor inspects it, to see if it’s safe to try again. Holding an eight-pound gun to my shoulder for minutes at a time, I began to feel a new level of sympathy for my 18th century counterparts.

With zero successful firings to my name, I was out of time. My first musket drill was on a hot day, when the humid coastal air had already coated the inside of my uniform with sweat by 10am. I lined up (they put me in the middle, so I could more easily mimic the other soldiers’ movements) and, when the drummer struck up, I began to march. The drums and fifes led us through the central passage – a cobblestone tunnel through the Bastion that connects the guardhouse area with the parade grounds – and we lined up, facing away from the crowd. 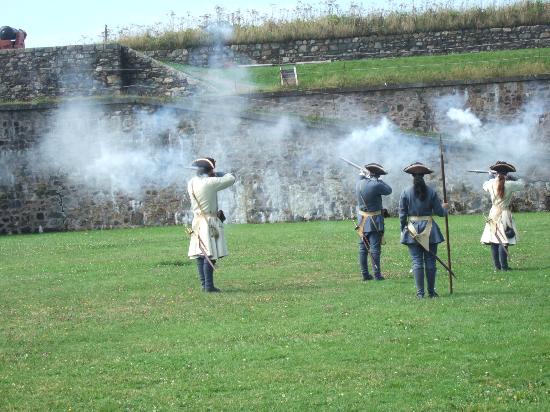 The first of two firings happens here, and everyone fires at the same time. When I heard the command to “Tire!” I pulled the trigger, and a flash of heat and light erupted inches from my eyes. To my left, another soldier fired at the same time, and a tiny shard of his flint crossed the eight-foot gap between us and stung me on the cheek.

Then we marched up to the banquette, reloaded, and knelt in a line, aiming our muskets up towards the Bastion’s bell tower. This time, we’re expected to fire in succession, and a misfire is more conspicuous because it breaks the steady rhythm of the guns. “Tire!” Another success! The guns do not have balls or bullets in them, so they don’t really kick back when you fire them. Never the less, I was tense and sore when I finally got back to the guardhouse. I knew it would get easier; I also knew that I’d have my share of misfires eventually. But I was glad to have had a trouble-free drill the time I popped my black cherry.

“Good job,” Said my supe, “Next thing, we’ll get you working on the cannons.”