Having imported the former from the Americas, and having claimed supremacy over the latter, the French smoke cigarettes and wear perfume like they’re both going out of style – which they absolutely are. I am not particularly scent-sensitive, but I’ve still had many a promenade disrupted by walking unawares into a cloud of tobacco or a wall of esters. I’m not even sure which one is worse; the second-hand smoke causes slow death but some of the perfumes worn by French women (and men) make me want to end my life swiftly.

The fact that I was able to perform promenades throughout the year makes up for the olfactory obstacle course. I stayed in the northernmost reaches of France, which is actually at a higher latitude than Cape Breton, the part of Canada from which I hail – and not just hail, but rain, sleet, wind, and snow. Yet my stay in France was comparatively balmy, with only a few weeks’ worth of nose-biting weather. And of course, if you can’t stand the cold, you can always head to the French Riviera.

I don’t know if this problem extends to France’s Mediterranean beaches, but it’s a perennial problem in Paris, and practically a pandemic in Lille. The French call it la crotte to be cute, but I know la merde when I step in it. It’s a question of common courtesy – if you have a dog, you’re responsible for everything that comes out of it – but more than that, it’s confusing because the French know they’ve got one of the most beautiful countries in the world…and yet they let their dogs just shit all over it. 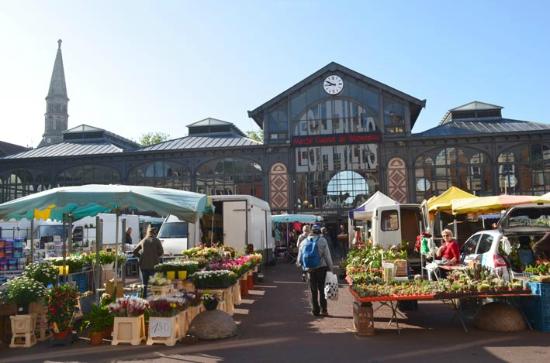 If you can navigate the fecal labyrinth, your rewards are bountiful. Given its varied climates, France produces a broad range of fruits and vegetables year-round, available at open-air markets throughout the city or town of your choice. They also love fresh and local fish, meat, and of course cheese. On Sundays, the markets often expand to include clothing stalls, book kiosks, even furniture. While some vendors can be pushy, I mostly found them welcoming and proud of their wares in a manner you’d never see at a North American supermarket.

It’s inevitable that some kitsch will creep in alongside the fresh/local/organic/culturally inspiring. Europeans don’t import cheap Chinese plastic crap at the same insane rate as North Americans, but they do have a weird obsession with Chinese knockoffs of Native American spiritual art. Half the cafés I’ve been to have a dreamcatcher hanging somewhere – usually not in the window, which is where they’re supposed to go – and I’m no nimosôm, but I’ve seen enough authentic dreamcatchers to spot a fake. Mes amis, kindly lay off the cultural appropriation, or I am going to have to stop ordering french fries.

Before coming to France, I did not think of myself as a gourmand. By French standards, I’m still probably a food boor, but I’ve discovered things about my tastes that, in hindsight, seem pretty obvious. To wit: I really like bread. And sugar. And sugary bread. France is a paradise of patisseries and boulangeries and viennoiseries, categories which suggest distinctions so subtle my sweet tooth can’t even be bothered. The names of the treats are as marvellous as their tastes – there’s even one just called merveilleux, and it’s not even a boast, just a statement of fact. But the paragon of pastry will always be the humble pain au chocolat. It’s hard to break from the North American ideology that “peanut butter and chocolate” is the ultimate combo, but wake up and smell the pastry, people. There’s a new perfect pair in town.

For all their skill and artisanal flair, there are a couple of very basic bread items that the French just don’t get. Bagels have never been a favourite of mine, so I don’t mind going without, but even a goy like me knows that bagels must be slightly crispy on the outside and thick through and through. Here, they are doughy and soft – kind of like a donut without the Boston cream filling. Yet they screw up donuts too; instead of the fluffy cakey interior, French donuts are just torus-shaped bits of bread, usually topped with an insane amount of chocolate. Actually, that doesn’t sound so bad (refer to Point 6 above) – but after a couple of attempts, I actually found myself missing Tim Hortons.

Comics, or bandes dessinées, are a respectable cultural phenomenon in France. Maybe they don’t have the same cross-generational appeal as manga in Japan, but they definitely aren’t just for kids. That’s true in North America too, of course, but despite decades of rebranding attempts, comics and graphic novels still get precious little respect. French comics artists are not considered doodlers, but actual artists, sometimes even receiving museum exhibitions. Speaking of museums…

It’s not a stop-the-presses exposé to claim that France has more than Canada. I knew about the opera, the ballet – you know, the snooty stuff. What I didn’t recognize was how casual and universal it is, to appreciate all things artistic when you’re totally surrounded by it. Museums and art galleries aren’t merely everywhere, they’re for everyone. Families visit them, teens hang out in their courtyards, and ads for new exhibitions are more frequent than ads for movies. But it goes deeper: every district in every city has a mairie, or town hall, which doubles as a maison de culture. They hold film screenings, games nights, lectures and discussions – all for free. And many mairies also contain libraries and/or ludotheques, which are board game libraries and which are the greatest idea ever.

Despite all their culture and taste, despite the fact that servers say “Bon degustation” (“Good tasting!”) when handing you your merveilleux, the French have a weird blindspot when it comes to cream. I’ll admit, this is a very personal pet peeve, but doesn’t it still seem weird to you that you can order an espresso, a latte, a cappuccino, or even a “flat white,” but if you ask for cream in your coffee, they think you’re speaking Greek? The closest you can get is a noisette, which is espresso with dollop of milk on the side. French grocery stores are no help either – they have dairy products in every conceivable format except fluid 10 to 30% cream. After eight months, I have taught myself to enjoy black coffee, and I may never go back. But, like the dogshit on the beautiful cobblestone sidewalks of Lille, it’s incongruous and weird – calories, calories everywhere, yet not a drop of cream.