I had hoped to be able to check in more often with my core values, but life doesn’t always accommodate personal reflection. Yet in many ways, it has been an ideal six weeks for testing those values. Time to see how they’ve held up within the maelstrom of cultural, geographic, and linguistic acclimatization – in other words, France. 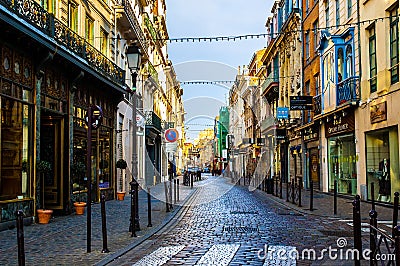 Awareness: It’s easy to say you’ll be hyper-aware in a new environment, taking in all the rich historic sights, the sounds of a strange culture, even the smells of the city (mostly dog turds, but still). Harder, by far, to process all that. Still, it’s a blessing to be able to walk down the same street a hundred times and spot something new each time: little quirks in the ancient architecture, the ever-shifting maze of road repair, even the surreptitious presence of the Romani children who come ‘round each week to root through trash bags. I’m aware of the city whose roots run deep; I won’t beat myself up for not yet being able to plumb those depths.

Openness: We’re trying to teach X how to talk through his emotions (in two languages). I’m dumb half the time myself; when I can speak, it’s about doubts and regrets, all of which stem from fear of the unknown: what will this year do to me? What will be waiting for me back in Cape Breton when I return? Yet, for all my lamentations, I forget to articulate the other half of the story: how bless I feel to have had the chance to come here in the first place. I need to be more open with myself and others about both sides of the coin – both the doubts, which are natural, and the joy, which may be fleeting but which is every bit as real.

Ease With Uncertainty: It would be hyperbolic to suggest I nearly died last month, but the statistics are clear: pneumonia is a killer, especially when coupled with a blood infection. I’m happy to be alive, obviously, but I’m also glad that, at the nadir of my illness, when my fate rested in the hands of a medical system I didn’t yet trust, I could still maintain an equilibrium – an inner calmness that now, in hindsight, bears the mantra: this, too, shall pass.

Personal Fulfilment: Sickness and recovery supplant a lot of material desires. I’m in the land of beer, coffee, and chocolate and I’ve barely had the energy to indulge. But that’s a good lesson in itself; if I only have one amazing Belgian tripel each month that I’m in France, I’ll return with ten tremendous memories, instead of a protracted blur and a beer gut. Honestly, what I’ve learned (around the same time as I found out I wasn’t going to die of pneumonia) is, I can find fulfilment just sitting in a French market, savouring a plum while the disaffected youth of Lille blow smoke around me.

Friendship: I didn’t expect to make loads of new friends here, at least not this early on. It was nifty to meet French gaming geeks, and I’m open to forming a lasting friendship with any one of them, or anyone else with whom I share a trait or two. But right now, the best way to direct this value is back home, in both senses of the word. Here, it takes a bit more effort to stay connected with my friends in Canada (and elsewhere), but now those ties feel more important than ever. I certainly won’t take for granted any of the friends who go the distance (be it an email mile or a snail mail kilometer).

But “home” is also an apartment here in Lille, and I feel the need to redouble my efforts to think of my wife and son as friends, too. Lately, given X’s struggles at school and the ambient stress of the new, our family dynamic has been large on angst and conflict. We could use more camaraderie. I am cautiously optimistic that our upcoming trip to England can renew our friendly ties, so that when we get back to Lille and to X’s next school term, we can face things as a team.

Community Development: Definitely the hardest value to act upon here, but we’re making inroads. We went to a parents’ association meeting for X’s kindergarten, and the other night I attended a writers’ meetup, where all sorts of wordsmiths (mostly expats like me) exchanged tips on where, how, and why they write. It takes time, but I suspect there are other communities hidden in the cracks of Lille who could benefit from our involvement. It feels good to reach out, and while I’m fine with the idea of breezing in and out of France like a phantom, I’d be tickled to think I left the country ever-so-slightly better than I found it.

Creativity: Mind you, it also feels good to withdraw into my own fantasies. I’m not going to act or direct in any plays while I’m here. My creativity will be solitary, and I’m okay with that. Committing to a project as ambitious as a novel is scary and daunting and even absurd, given how much else I’m still coping with. But my life will never align itself in such a way as to present a perfect, novel-sized hole. As I said to the writing group the other night, you can’t sit around waiting for your Muse to offer table service; you have to hunt her down and drag her back, kicking and screaming if need be. I’ve chased my Muse across an ocean…it’s time to pounce.